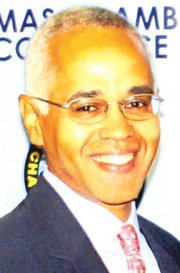 In a missive directed at Progressive Liberal Party Chairman Bradley Roberts, Mr D’Aguilar pointed to the Cheng Yu Tung family’s - owners of CTFE - inability to obtain casino licensing in two US states, and its alleged “well-documented connection to organised crime in Asia”.

When contacted before Mr D’Aguilar’s statement was released, Tourism Minister Obie Wilchcombe said the government has not received a letter of intent to operate a casino from CTFE, but expects such a proposal to be sent within the next two days.

Mr Wilchcombe told The Tribune that upon receipt of the LOI, the government will begin due diligence on the Hong Kong conglomerate to ensure that any decision made is in the best interest of the country, the Bahamian people, and the gaming industry.

Responding to widespread demands for more transparency from the government on this matter, Mr Wilchcombe explained that the government has only had two preliminary meetings with CTFE.

“We have had preliminary meetings with the group,” Mr Wilchcombe told The Tribune. “We are aware that they are operating in several countries as partners in casinos, and as operators in others.

“We’ve met with them twice, just to determine the extent of their involvement globally. They have major brands under their company, so we were very enthused by that.

“Of course we will do our due diligence to ensure whatever decisions are made, are made in the interest of not only the Bahamas and Bahamian people but also the integrity of Bahamian gaming jurisdiction.”

Mr Wilchcombe said the due diligence process will take at least three weeks.

“Because we’ve had discussions,” he said, “we know the company’s global involvement, their involvement in gems, in the airline industry, in the hotel industry. We are aware of their growth and development over many decades, so you have to look and determine to what extent they can impact your brand.”

CTFE is owned by the family of the late Cheng Yu Tung.

Mr Tung, a jewellery tycoon, was a Hong Kong billionaire who died last month – September 29 – at the age of 91. The year before his death he transferred his personal holdings in six Hong Kong-listed companies to Chow Tai Fook Capital Ltd. On his death, Forbes magazine listed him as the third richest man in Hong Kong with an estimated worth of US$16.6 billion.

In his press statement yesterday, Mr D’Aguilar said: “Perhaps Mr Roberts should tell the Bahamian people why they (CTFE) have been denied casino licenses in the United States, specifically Nevada and New Jersey, for simply being unsuitable and unacceptable.

“Perhaps then, he would be of some use,” the statement added.

Mr D’Aguilar did not provide any details to support his claims; however, speculation over the Cheng family’s link to billionaire Stanley Ho was published in Australia’s Sunday Morning Herald on August 24, 2014.

At that time, CTFE was part of a joint venture to bid for the Queen’s Wharf Casino in Brisbane.

Cheng Yu Tung acquired a 10 per cent stake in STDM, the Macau group which operates about half of the legal casinos in Macau, in 1982 and still holds this stake today.

The article states that Mr Ho owns a majority controlling stake in STDM, of which Cheng Yu Tung owns a 10 per cent stake, and other assets in Macau and Hong Kong. It said furthered that Mr Ho and his associates have been unsuccessful in attempts to expand gaming interests into Australia, Canada and other countries, and that the repeated rejection by casino regulators in Australian states and Canada was based on reports from “law enforcement agencies and other sources that have found him to be associated with Chinese triad gangs in his Macau casinos.”

It was revealed that CTFE was in talks over the troubled resort on Thursday via a press statement issued by the Hong Kong-based firm.

On Friday, FNM Leader Dr Hubert Minnis charged that the disclosure of the company negotiating with the government to acquire Baha Mar is too bare on details to satisfy the public’s right to information on the matter.

On Thursday, CTFE said it is “a world-class developer with immense experience in global hospitality and mixed-use development.”

Rosewood Hotel, a subsidiary of CTFE Group, has had a relationship with Baha Mar since 2011 as one of the originally selected operators for one of Baha Mar’s hotels.

However, after the resort, under the direction of original developer Sarkis Izmirlian, filed for bankruptcy in a US Delaware court in 2015, Rosewood requested that the court void its licensing agreement with Baha Mar, arguing that its brand had been tarnished by its association with Baha Mar.

Buyer is corrupt? should fit right in the Bahamas, no problem. PLP forever.

We have regressed and are back in the days of Lynden Oscar Swindling and his connections to global organised crime. Instead of Columbian and Mafioso, this current PLP government has a Oriental flavour connection to organised crime, sponsored and sanctioned by the Bahamas state of ship under chief thug Perry Gladstone Crisco Butt.

I just can't believe Minnis has inflicted this white haired constantly yapping poodle on the good people of Montagu and the people of the Bahamas at large. He yaps even more than I post comments to The Tribune website! Why does he think Bent Fat-Headed Obie and Crooked Christie give two hoots about the new Fookers they are now dealing with? The corrupt PLP government defied the outcome of a national referendum and crawled into bed with the racketeering numbers bosses like Sebas Bastian and Craig Flowers, even going so far as to wipe Flower's criminal record clean so that he could obtain a web shop gaming license under the so called "legislation" that was illegally passed against the will of the Bahamian people. And this annoying white haired constantly yapping poodle really believes his words are troubling in any way to Little Good Brad, Crooked Christie or Bent Fat-Headed Obie!!

Me thinks this darling little white haired poodle doth protest too much! We can bank on the fact that this annoying little Yapper is just another wannabe politician with a big mouth who likes the sound of his voice. If elected by the Montagu voters, he would quickly turn his attention to serving his own personal interests and those of his business cronies, many of whom live in Lyford Cay and have very little in common with the good decent people of Montagu.

Dionisio D’Aguilar may be business astute but he certainly is not MP material. The only purpose the poor people serve him are to work in his washhouses and keep him rich by not purchasing washers and dryers. He's actually bragged on radio that he hopes they maintain the status quo by not purchasing any to keep him in business.

I can't picture him sitting his rich derriere on the Kemp Road people's porches and actually talking to them and dealing with their issues. Good luck winning them over.

You can say what you like about Richard Lightbourn but at least he knows how to hang. Those people in Kemp Road love him. It was a mistake to run this fool in his place.

"Mr Wilchcombe told The Tribune that upon receipt of the LOI, the government will begin due diligence on the Hong Kong conglomerate to ensure that any decision made is in the best interest of the country, the Bahamian people, and the gaming industry."

Since when could the PLP be trusted to take a decision in the best interest of the country?

You mean to tell me the PLP are in dealings with people who lack credibility!? Get out of town, I know my PM Mr. Perry Christie would never do anything to harm the Bahamas or the Bahamian people!!

Comrades! Lest We Forget: Dionisio is the man's touched to replace Montagu's Richard. Having been then during the filing for Creditor Protection ... the lead Director Media Spokesman's for Izmirlian and his failed Baha Mar project of which saw the construction of that extravagance of a 'dock.' Surly, this section on his resume would be fair game for the constituents of Montagu's discussion at their dinner tables and street corners as to, if he is indeed the best 2017 General Candidate Minnis could be presenting to represent Montagunites? If we are going to talk about other people and their failed projects, then we also must hold a discussion on exactly what and whom all contributed to Baha Mar's Creditor Protection filing? A discussion that so far has been directed exclusively at the Chinese Bank and their Construction Company?
Lead Media Spokesman for all things Izmirlian, a title someone seems not to ever want to relinquish?

It is no surprise that Mr: D"Aguilar slams the buyer because he wants the place to sit forever. Now granted I am a "D" graded and there are many "A" on this site can some one explain "Alleged well documented connection to organised crime in Asia? Alleged means it has not been proven. As for little old him. he make up for it with his big mouth. he now claims the china bank is so bad. well it was not so when his Lord and master borrowed their money. His master signed an agreement and he did not live up to the agreement.

Bran made Minnis "leader of the opposition" and it would appear that Minnis is now passing the baton to Bran. Minnis is assuming too much with the Montague appointment and will probably screw up St. Annes. Remember when Stupid thought he was on the toilette but wasn't.

I"m getting kind of tired of this topic. Just get the dang thing finished and up and running. At the end of the day, we haven't had a single tourist pass through its doors. Let's focus on getting some heads on beds!

Comrades! The Former Director Dionisio on board the Baha Mar ship when it ran aground on bankruptcy court in Delaware, must think only Izmirlian should be the one to restart the failed Cable Beach's resort.
Regardless, it's pure political cynicism for anyone to even suggest that whomever happens to be the government of The Bahamaland, that they will not sign a deal to include even more taxpayers moneys, lands and concessions to the new developers of Baha Mar.
Papa sure as hell signed off lots behind closed doors during his regime to favour both the Chinese and Izmirlian, and if anyone should know this is the case, it has be that newest Montagu Red Movement 2017 Candidate - Dionisio. Dionisio, also knows izmirlian left the Chinese bank holding a $2.5 BILLIONS mortgage that was in default.
Tell me something Montagu's Dionisio. Did the Scotia Bank ever get repaid their $200,000 loan that was also in default that they unwisely loaned to Izmirlian?