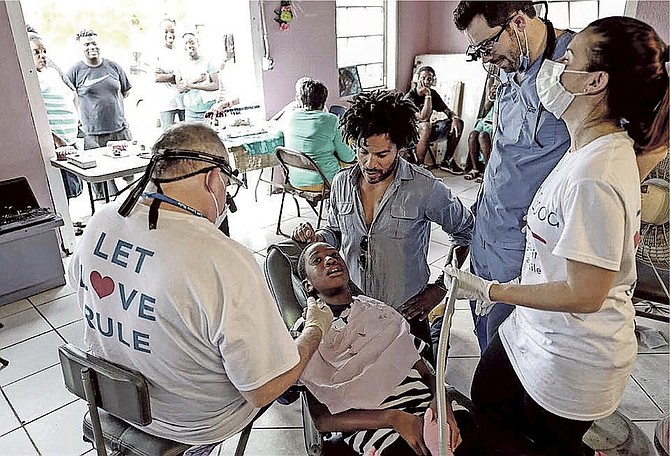 Musician Lenny Kravitz looks in as a youngster gets a dental check-up from a team in partnership with the GLO Good Foundation. Photo: Mathieu Bitton

HUNDREDS of Eleuthera residents are flashing bright healthy smiles thanks to world famous singer/songwriter Lenny Kravitz and the GLO Good Foundation that partnered once again to put on a free dental clinic in Gregory Town, Eleuthera.

The initiative is now in its second year and aims to give residents who do not normally receive dental care world-class services free of charge. Patients also received free health screenings and medical advice.

“We’re here to serve the people,” Mr Kravitz said at the site of the clinic in Gregory Town. “This is where I live. This is my home. It’s a privilege to be able to bring things to the people that are needed.”

“You might ask why start with dental but it’s something that I saw was extremely needed. There are so many people walking around with infections, with teeth that needed to be extracted, with no teeth. It’s beautiful to see this getting done, people walking out smiling, having teeth when they didn’t have teeth.”

Dr Jonathan Levine and his team transformed the Anglican parish hall into a fully operational dental clinic complete with top of the line equipment and a full dental team and support staff.

While there was serious business going on inside the clinic, the atmosphere outside was a festive family affair. Several children from the island ran around playing soccer while others ran a bake sale. Residents, young and old, praised Mr Kravitz for the great work he continues to do for the island and the country.

“During our last trip, in the three days the dentists worked they gave away over a quarter of a million dollars’ worth of dental care and worked on upwards to 300 people. I think we’re going to beat that this time,” Mr Kravitz said.

Dr Levine and his wife Stacey brought 37 dentists to Eleuthera, with the help of Mr Kravitz. Dr Levine operates a successful practice on Fifth Avenue in New York City and brought with him world-class specialists to Eleuthera, including oral surgeons and orthodontists.

“We can make partials on site,” Mr Kravitz said. “We can do extractions, root canals, dentures, cleanings, whitening and fillings. It’s a full service. These doctors, Dr Levine and his crew from New York City, are the best dentists in the United States. From the world really.”

Mr Kravitz spent most of the day weaving in and out of the clinic and interacting with the locals. He was not treated as a celebrity, but just another Eleutheran.

His cousin Deanna Holland, who was the nurse for Gregory Town, was the reason he moved to Eleuthera, Mr Kravitz said. Holland died in 2002 from an asthma attack.

“She took care of me when I was a kid in Nassau in the summers and she is the reason that I came to Gregory Town,” he said.

Mr Kravitz said it is his goal in the “next three to five years to have a fully set up medical centre, that offers medical and dental service with all of the proper technology for free for the people.”

“This is the beginning of that,” he said.

Dr Levine said the most rewarding aspect of the mission was the love Eleutherans were giving back. He added that it doesn’t hurt that Eleuthera is a gorgeous island.

“The rewarding side was all I had to do was go back to my practice last year, after we came down here, and listen to the energy and conversations that my team had with my patients. How excited they were about giving back and changing people’s lives and the compassion back from the Eleutherans to us, their gratitude. It warms the heart. There is nothing better,” Dr Levine said.

Mr Kravitz said the response to the clinic was amazing and it warms his heart to see the people of Eleuthera smiling bright.

“One woman put it best. She said that because of the attitude of these doctors and the love they gave them and the respect that they treated them with, they felt that they had paid top dollars for the service. It didn’t feel like a charitable thing that we gave them. It’s a privilege to do this,” Mr Kravitz said.