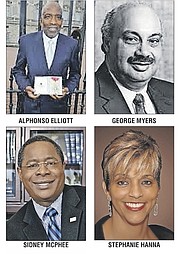 THE R E Cooper Sr National Meritorious Awards have announced four more outstanding people to be recognised for their service to their fellow Bahamians and to be honoured at the gala event on October 29 at the Atlantis Ballroom, Paradise Island.

The R E Cooper Sr National Meritorious Awards were founded more than three decades ago to recognise and honour outstanding people who have made a contribution of service, but rarely receive recognition for what they do. This was the legacy of R E Cooper Sr, who gained notoriety for his delivering the message at the first ecumenical service during Independence in 1973, but paved the way for thousands of Bahamians to receive a college education. Although he led the way with Prince William High School, his focus was on the full continuum of education. And right up to his death R E Cooper was still helping people to get a tertiary education both at home and abroad. His contributions were without fanfare and his satisfaction was knowing that the new Bahamas would have educated Bahamians.

The 2016 celebrations will include a number of activities leading up to the gala event. The following day there will also be a National Service at Mission Baptist Church, where the Family of R E Cooper Sr will give thanks and unveil a bust of their father in a special ceremony after church.

The Awards Committee said George Myers has quietly contributed to the welfare of the Bahamas through his many donations to and support of the various charities. He started in the hotel business in the 1960s and helped turn the hotel industry into one of the best in the Caribbean, winning many industry awards, including the Cacique Award in 2006 for his contributions to tourism and in 2009 for his business accomplishments. But rarely has he been recognised for his charitable and outreach contributions.

Sidney McPhee is originally from the Bahamas and has helped many Bahamians. Dozens of Bahamians have received scholarships to Middle Tennessee State University, but he has also contributed to the developments of several programmes through his associations that have benefited people here in the Bahamas as well as the US, the Caribbean, South and Central America and Europe, especially Turkey. “His example of what you can become is an inspiration to many young Bahamians who now believe they can achieve,” the Awards Committee said.

Stephanie Hanna is the Manager in charge of Public Relations and Administration at J S Johnson Insurance Company, the oldest and largest general insurance company in the Bahamas. Mrs Hanna has helped many charities, schools and other organisations with their development and is active in her church, especially in the dance ministries and outreach. She is described as “one of those quiet individuals who shun the limelight but her work speaks for her compassion and dedication to helping and offering service to her fellow man”.

Ellison Edroy Greenslade was appointed the sixth Commissioner of Police in an independent Bahamas in January, 2010. He attended primary schools in Cedar Harbour, Abaco, Lovely Bay, Acklins, Kemp’s Bay, Andros, Knowles, Cat Island, and Stephen Dillett, Nassau. He went on to S C McPherson Junior High and the Government High School in Nassau and also obtained an Associate’s Degree in Business Administration from The College of The Bahamas. He has completed a number of executive level courses in professional studies in the United Kingdom, Canada and the United States.

“Commissioner Greenslade has been selected by the R E Cooper Sr National Meritorious Award for Service because of just that,” the Awards Committee said. “His service to mankind and specifically to the Bahamas is outstanding. He loves his country and demonstrates that in his passion to his high end job of Commissioner daily. His commitment to helping the Bahamas to be a safe place despite the turbulent times is exemplary and worthy of recognition.”

International speakers are also expected to attend the gala event and be honoured for their accomplishments, among them Dr Xernona Clayton, founder of the Trumpet Awards in the US, and the world famous priest Fr George Clements.

the Bahamas has no shortage of outstanding people and living legends.

that is why they there are so many awards and beauty contests.