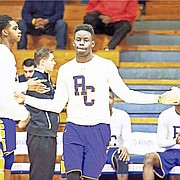 WITH major Division I offers in his sights, elite Bahamian basketball prospect D’Andre Vilmar will relocate for the final season of his high school career.

The senior guard will join the Eagles’ programme after spending the last two seasons with the Roman Catholic High School Cahillites in Philadelphia, Pennsylvania. 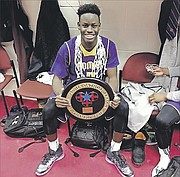 HEART OF A CHAMPION: With the Roman Catholic High School Cahillites in Philadelphia, Pennsylvania, Vilmar helped his team capture their second consecutive PIAA Class 4A title.

“At Roman, our head coach retired, a lot of players left and it just wasn’t going to feel the same,” Vilmar said.

“My host family I live with, their son is going to Paul VI with me, my parents think it’s a good move, my aunt and I have been talking about it a whole lot,  my AAU coach thinks it’s a good fit so I’m ready.

“I feel like going to come there and with some new scenery, I’m going to get to play my game and be more free to do the things I know I can do and the things everybody else in my circle knows I can do.

“It’s going to  be a great year and I feel like we can make a ‘cinderella’ run. We can really make some noise in south Jersey.”

Last season, the Eagles lost in the first round of the New Jersey State Interscholastic Athletic Association state tournament.

With the Cahillites, the 6’4” guard and Abaco native helped his team capture their second consecutive PIAA Class 4A title.

“I love Roman, I love the fans, I had great years there but I felt it was time for a change. I felt like this was something different and this was the right thing to do at this point,” he said.

Earlier this month, Vilmar announced via Twitter that he has recently received offers from the Oklahoma Sooners, Long Beach State 49ers and Buffalo Bulls.

The Bahamian connection with the Big 12 powerhouse Sooners has been well documented with the critically acclaimed career of Buddy Hield and Vilmar could be next in line for the Fall 2017 class.

The 49ers, out of the Big West Conference, last made the NCAA tournament in 2012 and participated in the NIT last year.

The Bulls have been one of the fastest rising programmes nationally with back-to-back NCAA tournament appearances, their first in school history.

In the offseason he participated with coach Darrell Sears’ Jaguars at various tournaments, including the the Big Foot Hoops Las Vegas Classic presented by Hal Pastner in Las Vegas, Nevada, the Texas Hoops Great American Shootout in Duncanville, Texas.

Prior to the summer circuit, Vilmar received one Division I scholarship offer, from the Colorado St Rams while other schools such as La Salle, Penn and Iona have all showed considerable interest.

Vilmar left Abaco in the sixth grade when he moved to live with his family in Delaware for a better opportunity at excelling in the sport.