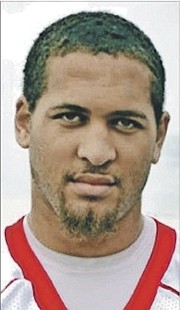 ALEX Cooper’s run at the NFL with the Cincinnati Bengals came to an end this weekend as the team made its final round of preseason roster cuts.

Cooper was one of 21 players released by the Bengals Saturday as the team trimmed its roster to 53 players ahead of next Sunday’s regular season opener on the road against the New York Jets at MetLife Stadium.

In each of the matchups, Cooper saw many snaps with the second and third units on the interior of the offensive line at both guard and centre.

Aside from starting guards Clint Boling and Kevin Zeitler, the Bengals chose to keep TJ Johnson who serves as a reserve for both guard spots and centre along with 2016 draft pick, Christian Westerman.

Heading into camp, the Bengals fielded 14 offensive linemen, making for a competitive finish for a final roster spot.

Cooper was signed as an undrafted free agent in May because of his versatility on the offensive line and that characteristic was on display immediately during his first appearance with the team. He participated in Bengals rookie-mini camp and immediately put that versatility on display.

Popular Bengals blog, CincyJungle.com, said Cooper’s versatility gives him an opportunity to remain in contention at several spots throughout training camp and the preseason.

“Cooper might not have any experience at centre, but he has enough experience at every other position on the offensive line that you probably wouldn’t have to take too long teaching him that position. Given his lack of athleticism, they will probably want to take full advantage of his skill set as he competes for a spot on the roster or practice squad.”

Cooper was one of 15 players signed as an undrafted college free agent by the Bengals following the completion of the NFL Draft.

Undrafted players made up 29 per cent of NFL rosters last season and within the Bengals organisation, six players were undrafted free agents including All-Pro linebacker Vontaze Burfict.

Following his stellar senior season with the Houston Cougars, Cooper garnered the attention of several NFL teams, including the Houston Texans and the Oakland Raiders.

In his senior season he was one of the anchors on an offensive line which powered the high-scoring Cougars’ attack. Cooper was named All-AAC and Phil Steele’s AAC Second Team selections.

Cooper started 25 straight games on the Cougars line at various positions, including both tackle spots and right guard.

Cooper and his line mates led a Houston team that is 14th nationally in rushing offence at 240.1 yards per game.

Houston’s leader along the line with 892 snaps, Cooper did not allow a single sack last season and conceded just eight quarterback pressures.