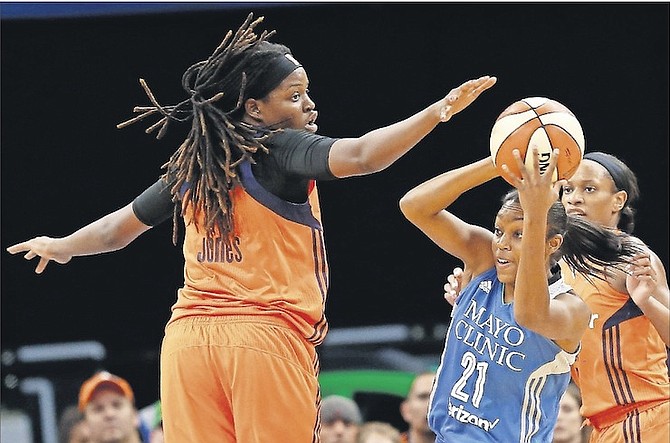 Minnesota Lynx’s Renee Montgomery (21) tries to pass the ball behind Connecticut Sun’s Jonquel Jones, of the Bahamas, during the first half of a WNBA game on Sunday in Minneapolis. (AP Photo/Stacy Bengs)

MINNEAPOLIS (AP) — Maya Moore was 4 of 5 from 3-point range and scored 24 points to help the defending champion Minnesota Lynx beat the Connecticut Sun 93-79 on Sunday night.

Minnesota (24-5) remained tied with Los Angeles for first place in the overall standings and will face the Sparks on Tuesday night in Los Angeles. The winner will not only take a one-game lead in the playoff race, but also secure the head-to-head tiebreaker with four games remaining.

The Lynx took the lead for good early in the second quarter but didn’t pull away until a 9-0 run spanning both halves made it 47-34 early in the third quarter. The Sun (11-18) got no closer than 12 the rest of the way.

Alex Bentley had 16 points, Jonquel Jones and Chiney Ogwumike added 14 each for Connecticut.