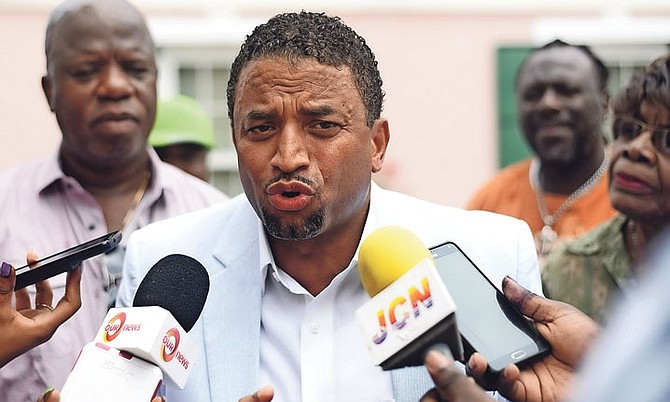 Last month, Mr Christie said that all Bahamian creditors would receive a substantial portion, if not all, of outstanding payments they were owed now that a new agreement has been made between the government and CEXIM to remobilise the resort.

However, the DNA leader said the truth is “no one is guaranteed payment” and those who will get paid will get “pennies” on the dollar.

“On Friday, September 9, many of you would have seen that the bank, via the Claims Committee has released a new set of Frequently Asked Questions (FAQs) on their website. These answers they gave on this website are a complete contradiction of what our prime minister promised us on August 22,” Mr McCartney said.

“Mr Christie promised the Bahamian people that all Bahamian creditors, including former workers, contractors and vendors had been protected, and would receive the majority, if not all of their outstanding claims. Well, the bank is now saying that no one, I repeat, no one is guaranteed a payment. And worse, they make it clear that any payment to any Bahamian creditor will be dependent upon the size of concessions offered to them.

“I want the Bahamian people to understand me clearly, the EXIM Bank will walk away with hundreds of millions in incentives while we the Bahamian people, who this government claims to represent, will receive pennies, if anything at all. And the government cannot lie to us any longer that this was the best deal they could come up with after a year of negotiating.”

Mr McCartney said it is clear that the government has been “bought, hook, line and sinker,” by the Chinese.

“What Baha Mar has truly exposed is how much a foreign government, no less the Communist government of China, is controlling the economic and political future of our country for its own ends,” he said. “This prime minister and his Cabinet have deceived the Bahamian people either because they have allowed themselves to be continually misinformed, or, worse, have sold themselves to the Chinese to maintain their own status quo.”

Mr McCartney said Mr Christie should hang his head in shame, ask the people for forgiveness and “demit office”.

Last Friday, the Claims Committee responsible for administrating payouts to former employees and creditors of Baha Mar updated its website with additional information about the claims process, including a warning that no one is guaranteed to be paid.

In the updated Frequently Asked Questions (FAQ) section of the website, claimsspv.net, the committee states: “There is no assurance that you will receive any payment at all. No creditor has any legal entitlement to the funds being administered but the committee. However, the committee has been formed to review claims and offer payments for valid claims at the committee’s absolute discretion. Priority will be given to Bahamian creditors on the basis that the fund has been provided in consideration for concessions and consents from the government which must benefit the Bahamian people.”

James Smith, the former state minister for finance who heads the Claims Committee, said these statements are made to emphasise that pay outs are being made on an ex gratia basis, meaning outside of any formal court-supervised liquidation process because the money is a gift from CEXIM.

The statement is also being made to emphasise that regardless of what one is owed, the amount of money legitimate creditors receive will be determined at the discretion of the Claims Committee, he explained.

YEs, Bahamians don't know if they are really going to be paid and if so, how much. They know that Bah mar may open (as well as it may not). And if it does open they know it will be at least a year or more before it is operational. They know that there is a buyer (as well as there may not be) and if there is they knows not who they are. They know the prime minister and his government made some deep, dark, secret deals, with the Chinese (who are not the original developers of Bah Mar) but they do not know what they are. They do know some moreconcessions have been given up. .

" I believe the process of going from confusion to understanding is a precious, even emotional, experience that can be the foundation of self-confidence. Brian Greene"&lt;

. I think television has betrayed the meaning of democratic speech, adding visual chaos to the confusion of voices. What role does silence have in all this noise? Federico Fellini

Lady AG shall make sure her family is paid, and paid in full. I wanna say that the government is so duplicitous, but I also have no confidence the Bahamian people. 40 more years!

Christie's new found Chinese friends have no doubt showered him and his son the realtor with very generous "ex gracia gifts" of one kind or another; gifts that likely would put political leaders in most developed countries in prison on the grounds of accepting illegal bribes. But Christie models himself after Mugabe and we stupid Bahamians have yet to do anything about it!