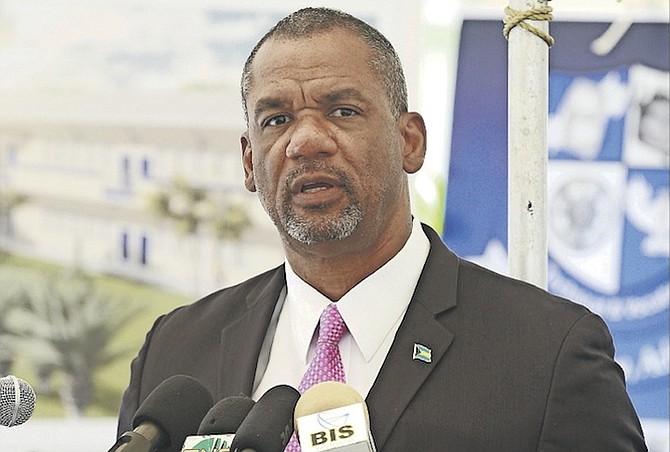 THE battle over parliamentary privilege is now before the Court of Appeal as Education Minister Jerome Fitzgerald has filed his appeal to have the landmark ruling and fine ordered by Supreme Court Justice Indra Charles overturned.

Mr Fitzgerald, with Attorney General Allyson Maynard-Gibson listed as the second appellant, is seeking to establish that Justice Charles was “wrong,” and “erred in fact and in law” when she ruled that he infringed on constitutional rights when he tabled the private emails of environmental action group Save The Bays in Parliament, and therefore could not be protected by parliamentary privilege. Justice Charles also ordered Mr Fitzgerald to pay $150,000 in damages for the breach – a decision the Marathon MP contends was made in error because he was “at all times acting in the public interest.”

The notice of appeal motion was filed last Friday.

In it, the appellants maintain that Mr Fitzgerald’s statements in Parliament were protected from legal liability by way of constitutional provision, parliamentary privilege, and also legislatively under the Powers and Privileges Act.

Insisting that Mr Fitzgerald’s statements – whether inside or outside Parliament – did not infringe on constitutional rights, the notice said that any potential legal liability would be a matter of private law.

The appeal notice read: “The judge was wrong to find that the first appellant (Mr Fitzgerald) conducted a search of the respondents’ property. He did not, and there was no evidence to support the judge’s conclusion that he did.

“The evidence did not demonstrate that the copies of the emails with which the case is concerned were the property of the first (Coalition to Protect Clifton) or the second respondent (Zachary Bacon) when they came into the possession of the first appellant, having regard in particular to their wide and/or unrestricted dissemination.”

It continued: “The judge proceeded on the basis that she was dealing with interference with the respondents’ electronic documents. In so doing, with respect, she was wrong. There was no evidence that the first appellant had searched or had anything whatsoever to do with the electronic versions of their documents, with their computers, email servers or otherwise.”

Mr Fitzgerald also argued that Justice Charles erred in fact and law when she determined that his actions were attributable to the government because of his ministerial position.

“There was no evidence to support a finding that Cabinet ministers, including the first appellant, either acted, or made the statements with which this case is concerned, as ministers on behalf of the government, or otherwise than in their capacity as members of Parliament.

“The judge referred, in support of her conclusion that the matters complained of (including the actions and statements of the first appellant) were attributable to the government, to the fact that a minister can in certain circumstances, bind the state as a matter of international law, for example if he signs a treaty on behalf of the Bahamas. With respect, this had no relevance or application to the facts of the present case, where the evidence demonstrated that the actions and statements complained of were not made by ministers (including the first appellant) on behalf of the government or the ministry concerned.”

In March, Mr Fitzgerald, the minister of education, accused STB of being a political organisation seeking to “overthrow” the Progressive Liberal Party government under the guise of an environmental group. In the House of Assembly, Mr Fitzgerald read private emails from STB members and others, which he said bolstered his claims.

Speaking outside Parliament, Mr Fitzgerald later warned members of the environmental group to “batten down” because a “category five” hurricane was on its way, as he threatened to table “every single” email and bank statement in his possession if needed to protect his integrity and parliamentary privilege.

Additionally, Foreign Affairs Minister Fred Mitchell claimed in Parliament in March that some $8.25m has been filtered through various organisations connected with STB – locally and internationally - from 2013 to 2015.

Coalition to Protect Clifton Bay (Save the Bays) and Zachary Bacon, the brother of hedge fund billionaire Louis Bacon, a resident of Lyford Cay, brought action against Mr Fitzgerald, Mr Mitchell and the attorney general.

However, Justice Charles found that there was no case against Mr Mitchell concerning breach of the group’s constitutional rights.

In her August 2 ruling, Justice Charles permanently banned Mr Fitzgerald from disclosure and publication of any further material belonging to STB, and ordered him to delete all electronic and hard copy material within 14 days.

In the appeal notice, Mr Fitzgerald argues that Justice Charles was wrong to order an injunction over the matter because the existence of electronic records was never established, and the hard copies tabled in the House of Assembly were not within the custody or control of the Marathon MP, but in the safekeeping of the House Speaker Dr Kendal Major.

The notice asks that the respondents, Coalition to Protect Clifton and Zachary Bacon, be made to pay the costs for the appeal.