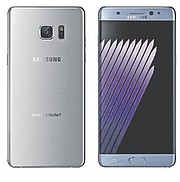 Dangerous smartphones: What Note 7 owners should do

Samsung plans a software update for its Galaxy Note 7 designed to prevent the battery in the mobile phone from exploding or catching fire. The company is also offering replacements for the 2.5 million phones it’s sold globally, but a new Note 7 is not available yet. Here are three things Note 7 owners should do:

Its latest software update is meant to protect those consumers who are continuing to use the phone. The update for users in South Korea will start Sept. 20, and the company hasn’t said when it will be available in other countries.

But Samsung says U.S. users can replace Note 7s now with a different model — either a temporary one until the new Note 7 is available or a permanent switch for the company’s Galaxy series. Owners should do the swap at the store where they bought the phone or, if bought online, call the company at 1-800-726-7864 (that’s 1-800-Samsung).

AND MOST OF ALL,

DO NOT USE ON A PLANE

The Federal Aviation Administration has warned passengers not to use the phone or charge it during a flight, and to keep it turned off.

Several airlines have also banned the phone, or asked passengers not to check it with their bags.

SAMSUNG, the world’s largest smartphone maker, plans to issue a software update for its recalled Galaxy Note 7s that will prevent them from overheating by limiting battery recharges to 60 per cent.

The South Korean company announced the move yesterday following its unprecedented global recall of 2.5 million of the smartphones two weeks after their launch after dozens of cases in which batteries exploded or caught fire.

Samsung is urging consumers worldwide to stop using Note 7 smartphones immediately and exchange them as soon as possible, as more reports of the waterproof, large screen phones catching fire emerged.

Aviation regulators and airlines have deemed the Note 7 a flight hazard. The Federal Aviation Authority (FAA) urged users to switch the Note 7 off and not to use or charge it during a flight. Several airlines around the world asked travellers not switch on the jumbo smartphone or put it in checked baggage, with some carriers banning the phone on flights.

Samsung announced the software update for any users of the Note 7 who may be disregarding its recall notice and continuing to use the smartphone. Analysts said the software update appears to be a last-ditch effort to contain the crisis, one calling it a “desperate measure”. Samsung “has to contain the battery explosions but people are not returning the phones,” said Peter Yu, an analyst at BNP Paribas.

The company did not say how many more battery fires in the Note 7 have been reported since September 1, when 35 cases were confirmed. There are more cases that Samsung said it is aware of - one at a hotel in Perth, Australia, and another in St Petersburg, Florida, where a family reported that a Galaxy Note 7 left charging in their Jeep had caught fire, destroying the vehicle. The New York Post reported that a six-year-old boy in New York was burned while watching videos when the Note 7 burst in his hands. The device is also suspected as the cause of a garage fire in South Carolina.

In announcing a recall on Monday, the Canadian government said one case was confirmed there while Samsung received more than 70 reported cases in the United States. The US Consumer Product Safety Commission is considering an official product recall after urging owners of the phone to turn them off and leave them off.

A recall by the safety commission would allow the FAA to ban passengers from carrying the phones on planes. The three biggest US airlines - American, Delta and United - have said flight attendants will remind passengers of the FAA warning, but it was unclear how they would make sure that passengers keep the Samsung devices powered off.

Scandinavian Airlines has prohibited passengers from using the Galaxy Note 7 on its flights because of concerns about fires while Singapore Airlines has also banned the use or charging of the device during flights.

Samsung said yesterday the software update for South Korean users will start on September 20. It was not clear when the update may be issued overseas. Also unclear was whether it will be forced on existing Note 7 phones regardless of user consent.

Samsung plans to begin issuing new Note 7s with batteries it says will not be prone to overheating starting on September 19 in South Korea, blaming the problem on a manufacturing glitch in the rechargeable lithium batteries. The company has urged consumers to immediately turn off the phones and get them replaced with the new Note 7.

But implementing such a large-scale recall is a challenge. Consumers have to visit Samsung service centres or retailers twice, once to get a replacement phone - not a Galaxy Note 7 - and have a safety check of their existing Note 7, and a second time to get a new Note 7.

Keeping the battery level low could reduce the risk of overheating, but would be equivalent to getting a downgrade of a top-of-the-line phone, said Kim Young Woo, an analyst at SK Securities. The Galaxy Note series are among the most expensive handsets made by Samsung. “It means that the phone has not been optimised before the release,” Mr Kim said.

So if you bought your phone in Miami or foreign you may not be allowed to take it back on the plane. How will you get it back to where you purchased it from

With the battery removed...

They are hot allowing these phones on flights period

You get swing @John

There has indeed been a big product recall and hopefully, they would be careful in future regarding the parts they use. However, no one should be using this now, but if someone is still using this device, then he should consider getting the software update. Getting the right software could solve many problems for you, if you are a coach who does not like to ask clients to pay bills then http://www.cloudnet360.com/blog/sched...">scheduling system for coaches would be ideal for you.