Vendors Claim They Are Blocked From Working On Cabbage Beach 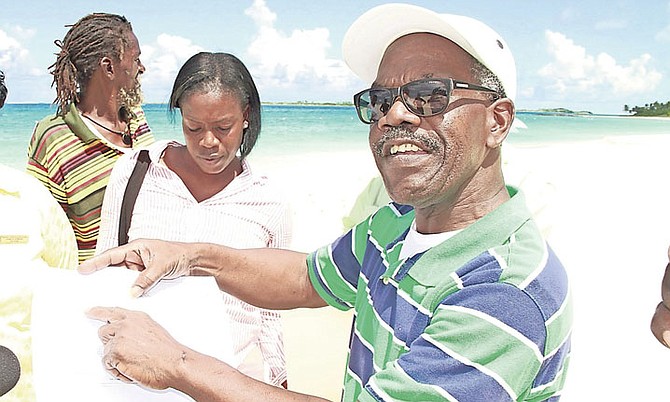 DESPITE the conclusion of several court matters, members of the Cabbage Beach Business Owners Association said they are still being blocked from operating on the beach by law enforcement and private security forces.

Senior members of the association, backed by several other concerned citizens, held a press conference on the shorelines of the beach property, pinpointing many of the problems blocking them from operating on a day-to-day basis.

CBBOA President Monique Taylor said members of her association are at their wits’ end and don’t know where else to turn, as many of them are now unable to make ends meet, as police and security officials have ramped up efforts to bar them from the Cabbage Beach property.

Detailing a series of arrests in recent weeks, Ms Taylor said events have got so out of hand, that she herself spent this past weekend behind bars, accused of trespassing. She claimed that she was operating in the same way she has for her entire career on the beach.

“Today we came to shed light on some issues and bring exposure to have the issues addressed. At present now, working on the beach we have a lot of harassment from the hotel’s security officers, along with officers from the Royal Bahamas Police Force,” she told reporters.

Association representatives indicated that the operators of the Ocean Club Beach Estate and the Paradise Island Beach Club have been more deliberate in their efforts to have members allegedly removed from the sections of Cabbage Beach directly behind the properties.

There are claims that an entry point furthest east on the property gives access to the part of the beach that is affixed to private property. If the claim holds true, the public easement, directly in front of the Paradise Island Beach Club, would allow vendors access to the beach, but would block them from setting up stalls in that section.

Vendors would then be relegated to operating their businesses nearer to the western easement that leads to Cabbage Beach - the section where vendors tore down a fence blocking access to the beach in March.

Ms Taylor said: “Even though we have a business license to operate on Cabbage Beach, it is said that Cabbage Beach is not this section which we are located on - in front of Ocean Club Estates and the Paradise Island Beach Club. But we have a map that clearly outlines Cabbage Beach being this entire area and apparently, when they had a problem with the vendors being on this part of the beach, they said to officers that this area is private and (they wanted vendors off the property and or arrested for trespassing).”

She added: “Just Saturday gone, two officers came out here and they arrested me for operating my business on Cabbage Beach with a legitimate business license, and a number of other vendors are being harassed because they are working out here.”

Ms Taylor said the matter has only been made worse, as the operators of the Paradise Island Beach Club are allowed to rent both umbrellas and chairs to persons accessing the beach - further hampering the business of vendors.

“The Beach Club is a well established hotel. I think it is wrong that someone from the government department has not come down and looked into this. Yet they decide to interfere, harass, arrest and unlawfully detain vendors who have business licenses.”

CBBOA Secretary General and Consultant Randy Rolle criticised senior members of the government, labelling the Christie administration as accessories to foreign investors attempting to plunder the Bahamas for its tourism value.

“Three generations of vendors have been on this beach, for more than 60 years,” he said. “The law states that if an easement has been unused for more than 12 years you cannot come back and say you didn’t know.”

He added that the law makes provisions for beach access.

The Cabbage Beach issue has been a contentious issue for most of the year.

Back in March dozens of irate beach vendors blocked traffic flow over to Paradise Island in protest of the sudden closure of the main entry point for vendors to the beach.

That incident led to the arrest of at least two persons, and further protests in the days that followed.

The dispute climaxed with the tearing down of the fence erected in a bid to block access to the property by vendors.

Subsequently, 10 persons were taken into custody, charged with destroying private property - the fence.

One of those persons, concerned citizen Francis Johnson, yesterday stood in support of the Cabbage Beach Business Owners Association.

She called on Tourism Minister Obie Wilchcombe and Prime Minister Perry Christie to stand by their political adage of “believing in Bahamians” and intervene in the matter.

“Well if you believe in Bahamians, this is a part of the Bahamian problem,” she said. “There are Bahamians who are going through this problem.”

“Three generations of vendors have been on this beach, for more than 60 years,”

Certainly NOT on Cabbage Beach 60 years ago.

Beach vendors were in very, very small numbers in 1974. It was mainly the parasailing and other water sports, vendors in those days.

How long will it take to realize that the owners of Atlantis, The Ocean Club, and other resort properties, don't want Bahamians on Paradise Island, PERIOD. All of this talk about beach access, and the right to operate a business on Cabbage Beach by a Bahamian, is wasted breath, because these resorts will not stop until there is no more beach access. I, for one refuse to patronize any of these properties, as I am made to feel that I am only allowed to spend MY MONEY at their pleasure. This discrimination must stop.

I am a Bahamian but due to the fact that I am white I am considered to be a tourist by the Vendors---When I tell them, as politely as possible, that I am not interested in buying any of their wares I am cursed and ridiculed in the most offensive manner---This is in front of my wife & children---This is a great way to encourage our tourist trade---These people should not be allowed anywhere near the beach!

Majority of dese Bahamians are God fearing practicing Christian vendors HOWEVER, there are a few who who are the practicing bad ones who regrettably are not chastised or reprimanded by their brothers the same God fearing ones and Christians who will look on in amusement as verbal blows are thrown on the white people. The term Bahamian should not be a euphemism for Black Bahamian as has been passed down and as you have experienced. Sadly the efforts in former Governor General Sir Orville and others in promoting one Bahamas has fallen on the wayside. Another challenge that will manifest in the coming years is a large percentage of the population speaking Haitian Creole which has only one other country understands and in Haiti too those in one part may find it difficult to understand those elsewhere. As with QUEBEC, it is inevitable that Bahamians with Haitian Creole language will advocate that all Bahamas be bi-lingual. Traffic signs, govt buildings, Airport, govt publications, school books, private sector will have to provide bi lingual media. Currently, there are many persons who are more fluent in Haitian Creole and currently one can be in any place and listen to persons talking in Creole. Being Bahamian should not only be quoted as in the Preamble, but practiced in Christian behaviour, language and overall broughtupsy.

Very few Bahamians are practicing Christians. Most go to church but very, very few are real Christians. Look at the number of children born out of wedlock, all the sweet hearting.

I don't know which country you are referring to but it is not the corrupt (millions stolen from taxpayers by civil servants - read the audits).

Comrade Economist, yes for sure whilst they're faithfully attending to hear the Sunday mornings sermons, they's ain't a practicing they Jesus teachings on them other six days week.
If most them Sunday morning touch basis with they Jesus, were to open the old family Bible the only faith fascination with Jesus that would fall out from pressed between the pages would be they copy of praying for it be they lucky numbers receipt.
My own home Church Preacherman's, uses his numbers receipt as his page marker.
If there was no numbers to bet on short of some kind sickness they wouldn't even thinks they need this miracle maker man's they calls Jesus - services.
Amen!