Carnival ‘Was Never Meant To Be Profitable’ 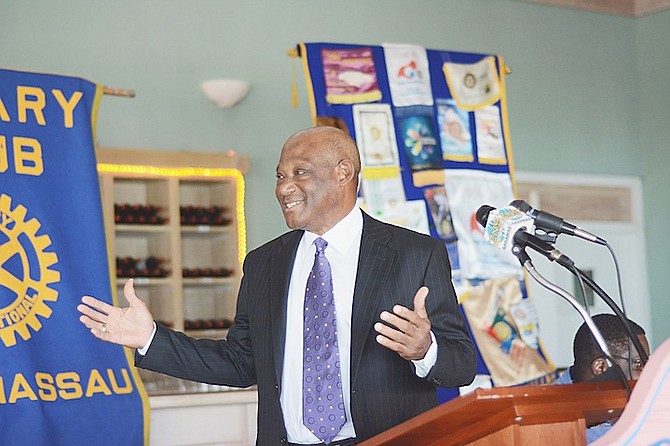 Responding to questions yesterday at a press conference in which the BNFC revealed its economic impact assessment of the event’s second year, Mr Major condemned opponents of the festival who continue to look at country’s annual investment, instead of the carnival’s “economic impact”.

He said the festival has never been and will never be about turning a profit on investment, contending that no variation of the event hosted around the world has generated a profit for the host nation.

“Nowhere in the world is a carnival a profit venture. In Trinidad they spend, I think we estimated somewhere around, based on the conversion, $40m a year,” said Mr Major.

He said the success of the festival must be measured by the thousands of persons that benefit from the event indirectly.

“So those 15,000 people that buy costumes that average prices between $500 and $1,500, that is what it is about. So the GDP impact in that is in the hundreds of millions dollars, and that is the big picture we need to see.”

He continued: “We keep talking about what we spend, but you are not looking at the economic impact of what this thing does. It is powerful. And you have got scores of countries that are using this carnival model to be able to draw people to their shores and to be able to expand their GDP.”

On Monday, officials released key financial details surrounding the 2016 event, revealing the total cost was $9.8m with a government subsidy of $8.1m.

However, at the time Mr Wilchcombe said the final figures were still being worked on.

Last year, the government spent $11.3m on the inaugural festival, going over its initial budget of $9m, with the total cost of the first carnival coming in at $12.9m, with the rest covered by sponsors.

He insisted that the Bahamian economy could not sustain another year of this sort of “reckless spending”.

He stated: “That is absolutely ridiculous, they need to show the people where and how these figures were determined. Show me the money. You’re telling me you spurred business, you boosted the economy - all of this is insane. It is curious that minister of tourism initially presented a $3 million budget. Weeks later, that figure jumped to (nearly) $8 million. That proves that there is no planning being done, they are working with a blank cheque and the taxpayers are footing that final bill.

“I think an investigation needs to be had to determine what exactly is going on with carnival and the BNFC. Absolutely, I think we have to look at last year and this year and determine how the government worked out these numbers because these figures come across as a design to lead the public to a pre-set conclusion,” Mr Turnquest said.

“The Bahamian people go in to this festival with expectations, and now, it is clear that our expectations and theirs don’t hold up. Now they are saying $8.1 million was the final spend (from the government). Well I’m saying that all of that or part of it could have gone to alleviate many of these problems we are facing in this country,” he stated.

“It could have been used to fix the air condition issues at the hospital where lives are at risk. How the hell does it take two weeks to fix a damn air-conditioner? This whole situation is ridiculous.”

“His claims that this event was never designed to turn a profit, that is just an incredible statement and it proves that they think the Bahamian people are just going to spend money without any indication on how it is benefiting the overall society. We can’t continue to do this, we are going broke and underwater. This entire whole situation is unreasonable, unbelievable and dumb,” the East Grand Bahama MP said.

According to the BNFC, the festival in its second year, continued to succeed in its mandate of stimulating economic opportunities for businesses in the creative sector and positively impacting the national GDP.

Officials estimated that some 278 small and medium businesses and 696 individuals benefited directly from the expenditures related to the annual festival, 85 per cent of which was spent locally with suppliers across a myriad of sectors.

The committee indicated that it was able to “realise significant cost savings” in year two of the festival by bringing a more strategic focus to the event and implementing several key recommendations made after the inaugural festival.

These moves are said to have reduced government subsidies by an estimated $5 million - about 38 per cent less than 2015.

I mean really he's right .... the PLP has never done anything profitable for the people only for themselves and their cronies.... why should we have expected anything else from these crooks?

Economics is a social science concerned with the factors that determine the production, distribution, and consumption of goods and services.

Regardless 4 years, 3 months ago

....put producers in place that know how to turn a profit. Major, Dames and Fields obviously think they don't need to!

That's not what we were told at the outset! Let's face it, this was just one big costly party. Watch for next year's event being even bigger and more costly as the PLP tries to distract the deluded from the reality of our dire economic situation and the party's abject failure at governing the country.

PS: My dear Government. I'm having a party next week . Can I have 40m toward it ?

This man's past record of "dealing" with OPM suggests that we take a long and hard look at what is going on with this project. . .

Comrades! So excited sounding were Paul and Roscoe leading up to Kanaval 2015, they could be heard bragging loudly live on-air on every talk radio show about how much money Kanaval 2015 would make for all involved. Their excitement levels were Pee level high. In fact one talk show host swears, they might have had a pee accident in they pants during the interview.
Nothing but silence from these two who I never heard once on talk radio bragging about all the millions those involved with Kanaval 2016 were about rings through their cash registers?
Did I read this correctly or not. Has Paul's fantasy also now magnified to 15,000 people that bought 2016 costumes?
Please Tribune reporters, either sell tickets to your reporters comedy hour, or try picking up the damn telephone to call the Rental Car companies in Nassau and Freeport to discover the facts? I spoke with them when the same claim was made in 2015 and the rental car companies people I spoke with, just laughed at the phantom all cars out on rental claims.

No it was always meant to be a way for political cronies to make a fantastic living off of the backs of hard working tax payers ,,nothing more nothing less then a faucet to the treasury

Again I quote... "Mardi Gras, New Orleans’ world-famous Cajun equivalent of Carnival, brought in $164 million directly to the city in 2014. When the year-round value of Mardi Gras’ brand (such as merchandise sales, and sustaining lodging, bars, and restaurants) is included, the figure grows to $465 million. This was 2.22% of New Orleans’ GDP and provided $17.6 million in tax revenue to the city and other government entities. In 2011, the net fiscal benefit to the city was more than $13 million, or a return of $8.45 for every city dollar spent.

Toronto’s Caribbean Carnival (the largest of its kind in North America) is also phenomenally successful, drawing in 1.2 million visitors. A 2010 study found that it generated $438 million for the local economy and resulted in the creation of some 6,800 jobs, of which over 80% were in the Toronto area. The return on investment is staggering, since the combined cost to Toronto and the provincial government of Ontario was only slightly over $1 million." . . . http://blogs.blouinnews.com/blouinbea...">http://blogs.blouinnews.com/blouinbea...

"Paul Major said that the Kanaval 2015 had a “positive” impact on the country. “Our main goals for the festival were to create an economic stimulus within the cultural sector; expand our tourist product offering; develop a framework for indigenous cultural production; 'create a platform that exposed Bahamaland music to the world' and revolutionised the entertainment industry; promote Bahamian entrepreneurship; and foster multi-sector economic impacts. Bahamamaland Junkanoo Carnival 2015 successfully accomplished those goals,” he Paul Major said all this crap and lots more.

Is this the same Paul Major who said at the inception of carnival that, "It will take three or four years before it (carnival) becomes profitable." Ok, so he is a grand papa, so lets blame alzheimer's

Same Paul Major who said "carnival" is just a word and we're not importing Trinidad carnival.

and, quietly in yesterday's news paper they say carnaval in 2017 will not me in may 'so as not to interfere with Mother's day festivities'.

they make sure it happens before the election , lest someone comes behind them and cancels it.

Not so quick Paul Major, who with a straight face again thinks taxpayers lack even the minimum of common sense intelligence. Flashback to what Paul was saying back on April 15, 2016, about the fantastic "profitability" forecasts around the corner for Kanavals.

Bahamaland Kanaval organizer Paul Major, yesterday forecast that the event 'will be generating a 'profit' by its third year, with the economic impact increasing by 20.5 per cent over the inaugural 2015 version.

Paul Major unveiled projections showing that a $5.323 million ‘loss’ on the Government’s initial $9.323 million investment in this year’s Carnival will be transformed into a $1 million ‘profit’ by 2017.

According to the data exhibited by Mr Major at yesterday’s National Conclave of Bahamaland Chambers of Commerce, the Kanaval will generate some $4 million in revenue in 2015, with this sum increasing to $7 million next year and $9 million in 2017.

Comrades, did I just make this up or what? If I am not making this up, then shouldn't the Tribune reporter, stop acting like Paul's, wordsmith?
Go ahead Tribune reporter, I challenge you to demand that Paul produce the data he was using back in April 2015, when he was all Kanavals 'profitability' gung-ho?