On Patrol With The Guards Of The Nation’S Heritage 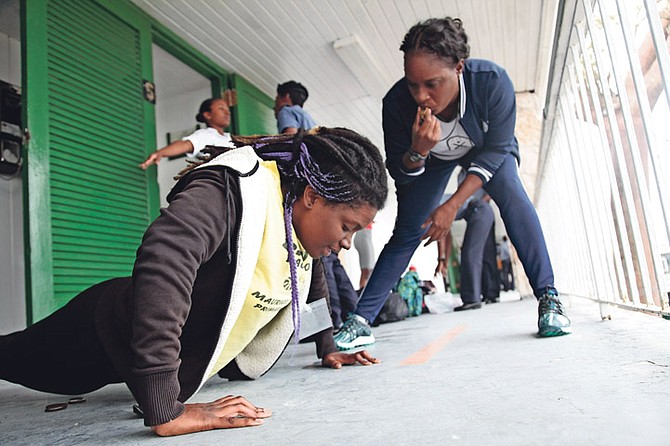 Training and teamwork are key elements in an efficient, modern Royal Bahamas Defence Force. Ava Turnquest, Tribune Chief Reporter, joins up for a day and finds out why the hard way.

IF you ask any member of the Royal Bahamas Defence Force (RBDF), any obstacle can be overcome with the right mix of training.

Whether it’s a leopard crawl through sand at its Coral Harbour base on the southwestern tip of New Providence; on rough seas and under a harsh unforgiving sun; or by the capital’s crime-filled hot spots - it makes no difference.

Such is the mindset The Tribune encountered during a recent media embed designed to raise awareness of the RBDF’s 37th anniversary on March 31 by offering the public a view from the frontlines through the experience of four hapless journalists.

Bleary-eyed and unsure of what challenges lay ahead, media personnel lined up with young RBDF Rangers and two undercover officers for what would be the start of a very different kind of immersion reporting. Stripped of personal effects, and some degree of bodily autonomy, we were thrust into the life of a new-entry recruit as the intinerary shuffled from training to strategy and mission deployment. While the physical elements were gruelling depending on the fitness of the journalist, it is true that there is a mental toughness that emerges in situations of total physical exertion.

The young Rangers and undercover officers who took part in the training exercise, complete with mini-obstacle course, established morale among the group. The easy harmony that can only be attributed to the dilution of ego inspired a weary media team and lifted spirits in a challenging and unfamiliar environment.

“Pain is weakness leaving the body,” was an oft-repeated mantra by course participants, and the attending officers who shouted harsh words of encouragement to push everyone through each activity. The recruits were grouped in teams with a journalist on each. As the training wore on, and journalists lagged behind, it became clear that the exercise was not only a test of physical skill, but also a mental test of team-building as no member could be left behind by the group. This meant that each team had to pace itself based on its slowest member, and account for how it would effectively progress through the obstacles.

“First of all it’s teamwork, understanding the command structure of the Defence Force and the persons who fill those critical roles,” said Commander Defence Force (Acting) Captain Tellis Bethel when asked for the secret to maintaining such an expansive operation. “For example, we have an Operations branch and we have an Administration branch and those are two principal areas for governing and co-ordinating all the activities of the Royal Bahamas Defence Force.

Ava Turnquest discovers why the mantra “Pain is weakness leaving the body” is oft-repeated at RBDF training.

“I use those resource elements for the purpose of addressing all of the demands at hand. For example, you can have a situation where we’re required to patrol our borders 24/7, and what we do for example is divide the Bahamas up into quadrants or patrol sectors and we ensure that those vessels that are assigned to those areas are actually doing their job.”

As the journalists would soon come to realise, each element of training reinforces the core principles of the RBDF’s operations. Each action, each procedure, we discovered, has a practical and often vital consequence.

“The obstacle course is just like a microcosm of what will happen in the daily routine,” Leading Seaman Omar Albury, Commando Squadron, said. “Each obstacle is actually a task to be done. You can do it properly where it will be easier to do, as simple as the leopard crawl. It may sound simple to crawl under an obstacle but if you are not fully there you’ll be dragging, your technique will be off, it’ll take you longer, you’ll do it hard, you might give up halfway.

“But if you were to be trained to be in a stressful environment and keep the technique in mind it becomes easier. So we use the obstacle courses to see how the training is affecting you.

“For instance, as a simple obstacle it should be done simply. If we see you having trouble with it we already know you’ve shut down mentally. It gives us the opportunity to see how you would perform somewhat menial tasks when the body is stressed.”

While news of the nation’s military often centres around reports of migrant apprehensions and smuggling operations, and the whopping $232 million invested in vessel acquisition, the underreported phenomenon at the heart of each mission, and every deployment, is immense personal sacrifice.

And for the nearly 1,500 enlisted men and women, it’s a sacrifice they can make only as a result of intense mental and physical training to prepare them for weeks-long tours of duty away from loved ones and comfortable amenities.

“One of the biggest things I think for a Defence Force officer is getting to understand that it’s a lot of thankless work,” said LS Albury, “and if you are a part of this organisation one of the first things you will get to understand on that first operation you go on is that they ain’t gonna call your name, they aint gone come and tell you thanks or do a big parade.

“So if you’re not able to have that personal pride and not able to get past the ego you will have a problem in this organisation. It’s a lot of thankless work,” he said.

“It takes a special type of person to continually do that over the years. Once or twice on average but after a third or fourth time a lot of people just suck their teeth and say ‘I’m not going no more’. You have to hone that part of your character in this environment.”

If not palpable after a morning of intense calisthenics, that sacrifice would become demonstrable as new media officers donned official fatigues and stepped aboard the HMBS Arthur Dion Hanna. Under the command of Acting Lieutenant Commander Berne Wright, journalists were stationed to several different crews and took part in fire and safety drills before being lowered into a smaller craft to do a cay search with LS Albury and members of the Commando Squadron.

As evidence of the perilous consequences of even the most routine task, fellow Tribune reporter Rashad Rolle fell overboard while attempting to disembark on a particularly craggy cay. Due to the jutting sharp rocks, the small craft had to be tethered and then held stable by an officer on the land. When Rashad slipped underwater while still holding on the rope, there was no time for alarm or panic on the part of the officers, who later explained that the Tribune journalist could have been crushed between the boat and the cay by the forceful waves had he become entangled in the rope.

The unpredictable nature of the job was again on display when the smaller craft’s radiator overheated and began to smoke as the cay search team headed back to the Hanna. Although a fire drill had been planned on board the patrol vessel, journalists were immediately thrust into a real-time fire emergency when thick black smoke billowed from the engine hatch and water flowed up into the boat as it tossed back and forth on the choppy waves. Once the situation was under control, journalists were then able to participate in a search and rescue as the engine was out and officers had to saddle up to to the HMBS vessel and help the search team climb aboard.

Out at sea it becomes blindingly clear that your crewmates are your lifeline and also why training is so important in ensuring that all officers return to Coral Harbour in the same condition that they left.

Carving a disctinct path for itself as a unique marine-oriented infantry, the country’s military is blazing ahead on its mandate of “guarding the nation’s heritage”, and in turn, is seeking to rebuild the nation’s character, courage and integrity.

“Training is key to success for us,” said Capt Bethel. “It’s fundamental to joining the Defence Force and certainly it should be ongoing throughout the career. We’ve found that with the international exposure that we’ve gotten, we’ve been able to gain experience and also to add to the experience exposure to others. The Bahamas is a unique place, it’s a maritime nation, and the Defence Force is unique, maritime-oriented unlike many in the region that are infantry-oriented. We have over 100,000 square miles of water and approximately five per cent of our territory is land. There are unique experiences that we have and we’ve been able to master them but now we are looking forward to exporting those experiences.”

“The Defence Force is a world where ordinary people do extraordinary things as an ordinary way of life. By all means I would welcome all those who want to do extraordinary things to join the RBDF and be prepared to grow, develop and learn both in leadership and character-management, technical skills. We see the Defence Force as a leadership manufacturing plant,” he said.