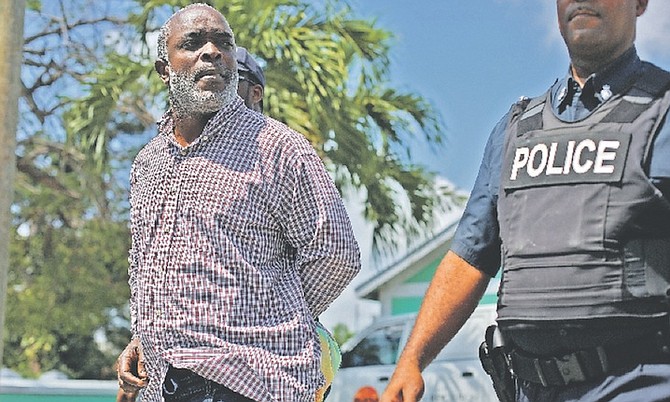 OMAR Archer Sr’s apology yesterday to a magistrate for failing to appear in court four months ago for his criminal libel case was not sufficient to spare him being remanded to prison.

The 45-year-old Nassau Village resident was flanked by armed policemen as he was brought to the Nassau and South Streets Magistrate’s Court complex concerning a pending intentional libel charge brought against him in September, 2015.

The allegation concerned defamatory posts against a woman on the former political candidate’s Facebook page in April, 2015, in which he claimed she had a medical illness, was a substance abuser and had a baby in a bucket.

The complainant had refuted the claims when the case commenced in November, 2016, and the matter was adjourned to December 30 for Archer Sr to present his defence.

In yesterday’s hearing before Magistrate Derence Rolle-Davis, the magistrate informed Archer Sr that there was a warrant of arrest out for him for his non-appearance on the adjourned date.

“I’d twisted my ankle and sent a medical slip with my brother but I don’t know if he brought it in. It wasn’t intentional,” Archer Sr said.

He also claimed he had been in contact with the court’s staff in this regard. However, the magistrate said he had different information.

Barry Sawyer, one of three lawyers who appeared for Archer Sr, formally apologised on his client’s behalf for missing court. He added that Fred Smith, QC, is expected to represent Archer Sr, who intends to give his defence.

“Mr Archer is not a flight risk and it is unfortunate the circumstances in which he was brought here,” Mr Sawyer said.

“Twisting your ankle doesn’t mean it incapacitates you,” the magistrate said to Archer Sr, stressing that he didn’t follow up on his case for nearly four months.

“My only fault was I didn’t call to find out the date and I do apologise to the court for any inconvenience caused,” Archer Sr said.

The libel case was adjourned to April 11 for continuation in which Sgt Lakisia Moss is the prosecutor.

“The defendant is remanded into custody until such time,” Magistrate Rolle-Davis concluded.

On March 31, Archer Sr was arrested by police at his home a week after police issued a wanted bulletin for his arrest.

Assistant Commissioner of Police Stephen Dean confirmed that Mr Archer Sr was in custody but did not provide any further details.

He had been wanted for questioning in reference to the possession of an unlicensed firearm concerning a photo on his Facebook page that depicted him holding a shotgun with a text overlay that read: “Minnis messenger paid for by the Free National Movement.”

In the comment section, he explained that the edited photo was “the work of desperate PLPs trying to discredit me in any way possible”.

Archer Sr is a former Progressive Liberal Party (PLP) member and one time chairman of the now defunct third party, the Bahamas Democratic Movement (BDM). He ran unsuccessfully on the BDM’s ticket for the former Kennedy constituency in the 2007 general election.

No indication has been given as to whether a charge would be brought concerning the wanted bulletin.