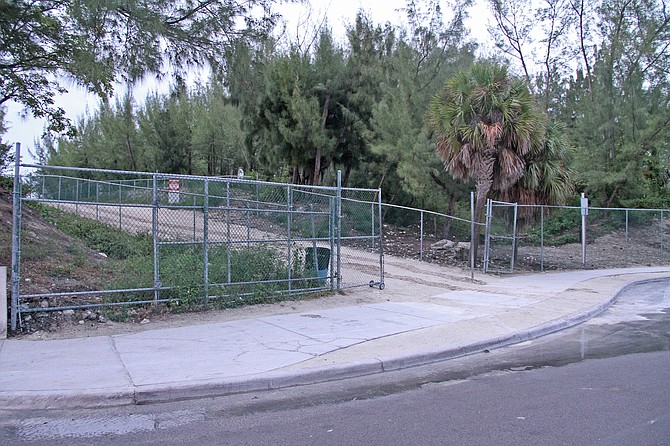 DESPITE losing their appeal, Halston Moultrie, lawyer for the Cabbage Beach Business Owners Association (CBBOA), said last year’s protest against restrictions to the main access path to the popular Paradise Island beach translated into a moral “victory” for the vendors.

Supreme Court Justice Bernard Turner had previously ruled that the CBBOA had no legal position to file an injunction or block the property’s owners from restricting vendors, a decision that was subsequently upheld by the Court of Appeal, his clients are “satisfied” that the actions of protesters “was sufficient to maintain the access.”

Mr Moultrie noted that there has been no interference in access to the beach since the protest, which saw the tearing down of a fence that was erected to block one of the two access points to the beach. He added that since then there has been “a free open access now to Cabbage Beach for more than a year, without incident”.

On May 5, 2016, Justice Turner sided with Access Industries, the landowners, over a dispute about whether vendors had a right to traverse the path in question near the Riu Palace Paradise Island Hotel to get to Cabbage Beach.

Justice Turner acceded to a position put forward by legal counsel for Access Industries suggesting that CBBOA did not hold the legal position to file an injunction or block the property’s owners from restricting vendors.

At the time, Access Industries had applied for the union’s legal action claiming the right to operate their business to be struck out on April 4 on the basis that the CBBOA, as a union registered under the Industrial Relations Act, did not have the capacity to bring the action.

Access Industries further charged that the vendors had signed agreements giving the property owners the right to cancel the contracts at any time.

Shortly after the ruling, Mr Moultrie suggested to The Tribune that the CBBOA still had a card or two to play in the matter, telling this newspaper at the time: “Whether we accept or appeal the judge’s decision, the matter is far from being over.”

When contacted on Friday, Mr Moultrie told The Tribune that the CBBOA appealed Justice Turner’s decision, but to no avail, as he said the judge’s decision was upheld by the appellate court. Nonetheless, Mr Moultrie said his clients still secured a moral victory, which he attributed to the actions of those who participated in last year’s protest.

“We were satisfied that the action of the Bahamian people in the demonstration that caused the gate and the fence to be removed was sufficient to maintain the access,” he said. “And even though Atlantis and AI Bahamas Ltd were successful before the courts, they dare not put that gate or fence back up.

“And so the whole purpose of our action was really to maintain the access to Cabbage Beach. So we felt that we earned a victory despite the court’s ruling.”

When asked if his clients have faced any issues in accessing the beach since last year’s ordeal, Mr Moultrie said: “There’s not been any interference with respect to access since then,” he said. “The fence has not been put up, nor has the gate been restored.

“The gate is no longer there that was locked every evening at 6pm. That has been removed from the day of the demonstration, and it has not been replaced. And so there’s a free open access now to Cabbage Beach for more than a year, without incident.”