Proclamations To Prorogue The House And Return To Parliament Read 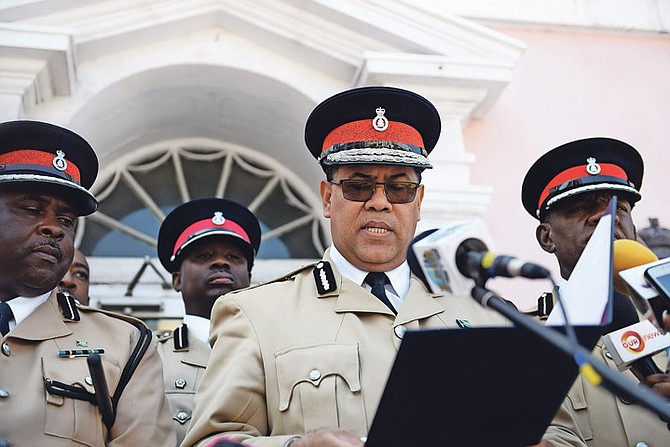 COMMISSIONER of Police Ellison Greenslade, in his capacity as Provost Marshall, read two Proclamations on Friday - one to prorogue the House of Assembly immediately and another to advise of a return to Parliament on Monday.

This comes after Prime Minister Perry Christie announced earlier this week that the House will dissolve on Tuesday, April 11.

Despite finally receiving the Proclamations, which signal the end of the Christie administration’s term in office, no mention was made of a proposed date for the 2017 general election.

However, Bain and Grants Town MP Dr Bernard Nottage, who has responsibility for elections and referenda, hinted on Tuesday night that elections could be planned for the first week or second week in May.

House of Assembly chief clerk Maurice Tynes, explained on Friday what the Proclamation to prorogue the House meant. He stressed it does not affect people registering to vote, as those who have not ensured they are on the voter register will have until Monday at 5pm.

“Prorogation today will not affect the registration process in any way. People will still be able to register today and tomorrow and up to Monday at 5pm. So the prorogation does not impact that at all,” he added.

Standing on the steps of the House of Assembly, Commissioner Greenslade read both Proclamations, signed by Governor General Dame Marguerite Pindling.

“Whereas, by virtues of Article 66(1) of the Constitution the Governor General acting in accordance with the advice of the Prime Minister may at any time by proclamation prorogue Parliament,” Commissioner Greenslade said as he read the first proclamation.

“Now, therefore, I, Dame Marguerite Pindling, Governor General of the Commonwealth of the Bahamas, do hereby prorogue Parliament as from Friday the 7th day of April 2017. Given under my hand and the public’s seal of the Commonwealth of the Bahamas at Government House in the city of Nassau this 7th day of April 2017 in the year of our Lord 2017 and in the 66th year of Her Majesty’s reign.”

The second proclamation read: “Whereas the Parliament of the Commonwealth of the Bahamas stands prorogued from the 7th day of April 2017 and whereas it is provided by Article 65 of the Constitution that each session of Parliament shall be held at such place and commence at such time as the Governor General may by Proclamation appoint now.

“Therefore, I, Dame Marguerite Pindling, Governor General of the Commonwealth of the Bahamas, acting in accordance with the advice of the Prime Minister, do hereby proclaim that the next session of Parliament shall be held in the city of Nassau in the island of New Providence on Tuesday the 11th day of April 2017 and shall commence at 10 o’clock in the forenoon given under my hand and the public’s seal of the Commonwealth of the Bahamas at Government House in the city of Nassau this 7th day of April 2017 in the year of our Lord 2017 and in the 66th year of Her Majesty’s reign.”

In a press statement from Bahamas Information Services, Dr Nottage urged Bahamians to get registered to vote, so that they can exercise an important franchise afforded to lawfully qualified citizens.

Registration Centres will be open from 9am to 9pm on Saturday. On Monday, all registration centres will open at 9am and close at 5pm. After this point, no citizens will be able to register to vote in the upcoming elections.

And beginning on Tuesday, registered voters in New Providence will be able to collect their voter’s card at the Parliamentary Registration Department Headquarters, Farrington Road. In the Family Islands, residents can collect voter’s cards at the office of the Family Island Administrator.

Such intrigue and pomp and circumstance! Getting an election date this time round seems to be like the extraction of an impacted wisdom tooth, must be extremely painful!