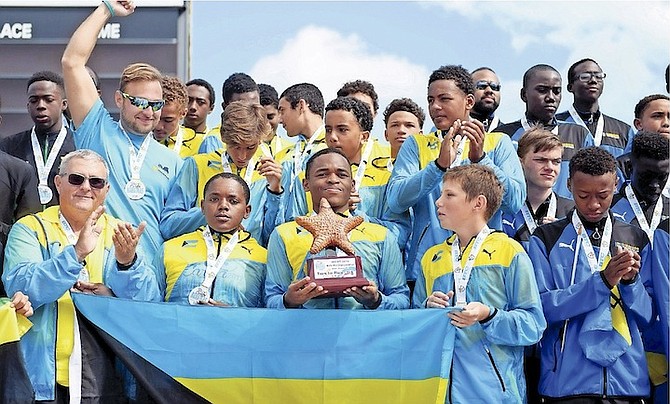 JOB WELL DONE: Team Bahamas’ water polo team members on the medal podium yesterday after the under-16 boys won gold and the under-19 settled for silver. Photo: Shawn Hanna/Tribune Staff

After watching the under-19 boys lose a heartbreaking 8-7 decision to Jamaica for the silver, coach Laszlo Borbely breathed a sigh of relief as the under-16 team won the gold by holding off Barbados 5-4.

The two games brought the curtains down on the exciting three days of competition in BTC CARITA Water Polo competition on Sunday at the Betty Kelly Kenning Swim Complex, just ahead of the swim segment of the games that will start on Friday.

“I can celebrate this one. It was just as exciting as the other one,” said a somewhat rejuvenated coach Borbely after he got thrown into the pool amidst the celebrations by Team Bahamas.

“One goal, we finally won it, but these guys fought to the last second. They just kept going and going. They came out of the hole after the previous game affected them mentally, but I talked to them at the half and I told them the previous game had nothing to do with them and they pulled it out.”

Down 3-0 at the half, Team Bahamas came up with four unanswered goals in the third quarter, led by two consecutive shots from Gabriel Sastre, one from Thor Sasso and another Sastre to go ahead 4-3.

Team Bahamas extended their lead to 5-3 in a quick goal from Loron Bain before Nathan James got his fourth goal of the game to bring Barbados within one (5-4) with just 35 seconds left.

However, time ran out on Barbados and they were left just as disappointed as Team Bahamas’ under-19 team, falling short of clinching the gold medal.

“It’s a great feeling to win this gold after I just finished playing the under-19 where unfortunately we got the silver,” Sastre said. “We had to take the gold and take at least one home.

“I was tired, but I put my whole effort into it. I didn’t want to go home without the gold. After we fell behind, I felt a little down, but I knew that God would have given us the power and strength to win the gold.”

Barbados head coach Ryan Forde said for a team that has only been together for eight months, to come here and lose the gold to the Bahamas by one gold was exceptional.

“They had a lot of heart and they fought right to the very end,” Forde said. “The tournament was very good, well organized and we were pleased to see how well the Bahamas played. They have improved under coach Loszio. Everywhere he goes, he does a good job.”

In a keenly contested match-up that went right down to the wire with Team Bahamas attempting a last second Hail Mary, Jamaica held on a 8-7 win for the gold medal.

Team Bahamas opened with a goal from Gabriel Sastre and they ended the first quarter with Saequin Miller scoring for the second time to push their lead to 302 at the first break.

Miller scored again to start the second quarter with a 4-2 advantage, but the Reggae Boyz got three consecutive goals from Oraine Garrick, David Bryan and Keith-Jordan Wilkinson as they snatched a 5-4 lead at the half.

Cody Jones joined Garrick and Bryan in pushing Jamaica out front 8-4 in the third. But the Bahamas made one last push in the fourth as Miller came up with a hat trick as he three goals trimmed the deficit to just one, 8-7.

“We started of a little bit shaky and our coach told us when we got in the water to open the game and let them know that we were here to win it,” Miller said. “At the end, picked up our momentum, but it wasn’t enough.

“It really hurt to lose by one, but we will go back and train hard and try to get them back at CCCAN. I think we performed very good. We gave it our all. Jamaica wasn’t a light team, so we had to give it our all and played team ball. In the end, it wasn’t in our favor.”

Coming from Germany where he spent some time training and playing, Miller said he was able to strategize on the weakness of Jamaica and managed to break free for his

Not what coach Laszio expected, but he will take the defeat gracefully.

“My players played their heart out. They gave it everything and even the Hail Mary didn’t work. It happens. What can I say I can only praise my players. They did an excellent job. They did everything. They left everything in the water.”

It wasn’t a happy hour in the camp, but coach Laszio accepted the defeat.

“This Jamaican team is very strong. Their players play in Washington and they are big physically and they are fit,” he stressed. “My team, which is coming up in the last few years, caught up with Jamaica. Only one goal difference and they are happy they got away with one goal. They just got lucky today, but I’m very happy with my team.”

On the flip side, Lance Rochester said his Jamaican team would take the victory.

“We’re very happy. Hats of to the organizers, hats of to the Bahamas team in general,” he said. “It was a really nice tournament. Our under-16 boys would have liked to have done better, but we’re happy overall.”

After taking the lead, Rochester said they were hoping to increase their margin, but they made some mistakes and it almost cost them the victory.

Jamaica made up for some disappointment after their under-26 boys had to settle for the bronze with their 7-3 triumph over Trinidad & Tobago. Barbados took home the under-19 bronze with their 11-8 win overt Bonaire.

Three girls contested the under-19 division with Trinidad & Tobago winning the gold 4-0 in the only shutout game of the tournament. Barbados finished as the bronze medalist.

On hand to help the teams celebrate was Minister of Youth, Sports and Culture, Dr Daniel Johnson.

“What you see today is the expansion of our sports franchise,” he said. “This is what are talking about Sports in Paradise, Team Bahamas doing what only we can do and the only way that we know how to do it.

“We’re trying to show young kids the amount of things that are available to them. Those are kids who may not make the Carifta swim team, but boy they are big and strong and they are tough. They might not make the football or track team, but they brought out what it is to be Bahamian.”