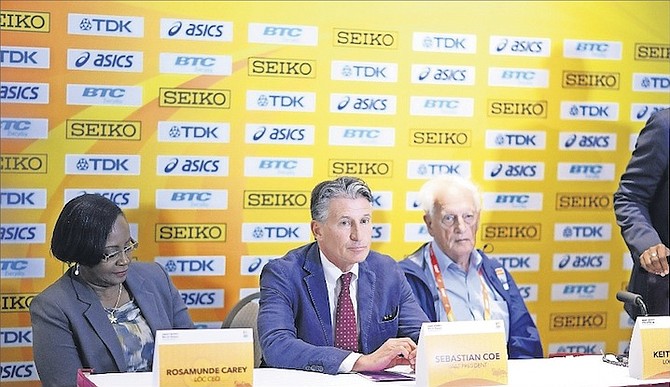 IAAF executives, athletes and spectators continue to file into the capital as the Bahamas prepares to host the IAAF World Relays for the third time.

The 2017 IAAF/BTC World Relays Bahamas is all set for Saturday, April 22 and Sunday, April 23, at the Thomas A Robinson National Stadium.

IAAF President Lord Sebastian Coe, fresh off his appearance at the CARIFTA Track and Field Championships in Curacao, visited New Providence yesterday to meet with BAAA executives and conduct a walk through of the stadium as preparations for this weekend’s event continues.

Coe will be unable to attend this year’s meet.

“Honestly, the BAAA and the LOC have become friends not only to the IAAF, but also to me personally as well, and although I will be watching the relays from somewhere far away, I trust that my team, who will remain here, and the LOC will host another spectacular event,” Coe said.

“I first came to this beautiful island about 30 years ago, and it didn’t take me long to realise that this is a community that appreciates track and field. I am delighted to be here, because this is becoming a favourite part to the international family of events. This is the third time that The Bahamas has so graciously hosted all of us. I am delighted, also because this event has now become a big event on the IAAF calendar.”

The top eight finishers in both the men’s and women’s 4x100m and 4x400m will earn automatic entry for the IAAF World Championships London 2017 to be held later this year.

The field is expected to include approximately 180 world and Olympic individual and relay medal winners. Seven Olympic champions and 11 world title holders will also be represented. A total of 34 member federations have entered 513 athletes – 285 men and 228 women.

The United States will seek its third Golden Baton, awarded to the team with the highest point total.

Teams will also compete for the total prize pot of $1.26 million. The gold medal team in each event will claim a prize of $50,000 and any team who breaks a world record will receive an additional $50,000 bonus by the IAAF.

Kenyan teams set new records in both the men’s and women’s 4x1500m while the USA did the same in both divisions of the Distance Medley.

Neither event will be contested at this year’s meet.

The Bahamas was only able to get the men’s 4 x400m team qualified for the Olympics at the last edition of the World Relays. The other three fell short.

The women’s 4 x 400m team took advantage of the last chance meet at the Blue Marlin Classic to secure their spot, although they had to wait on a court ruling against Russia before they were finally in.

BAAAs president Rosamunde Carey said after she and IAAF councilwoman Pauline Davis, Minister of Youth, Sports and Culture Dr Daniel Johnson and Director of Sports Timothy Munnings met with Coe at the 2016 Olympic Games in Rio de Janeiro, Brazil, the Bahamas was granted the rights to continue to host the relays for the 2019 edition.