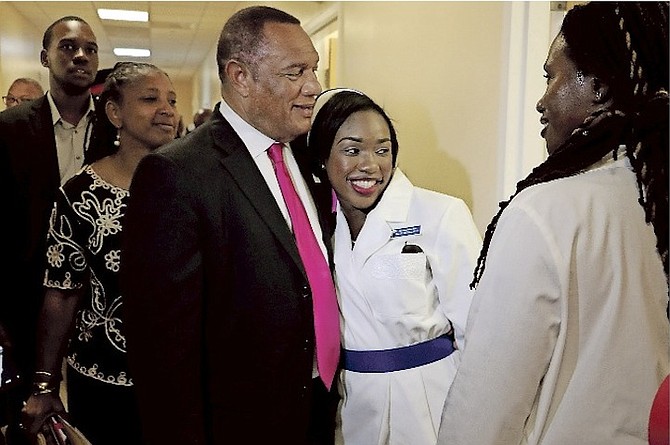 GOVERNMENT officials commissioned the Marsh Harbour Healthcare Centre in Abaco yesterday, touting it as a long-awaited boost to the island and the Christie administration’s National Health Insurance plans.

Like the Child and Adolescent and Robert Smith (CARS) Complex that was commissioned last year, the Marsh Harbour Healthcare Centre has a tortured history, one of missed deadlines and claims of shoddy workmanship, all without any clear accountability.

Construction of the healthcare centre began under the former Ingraham administration.

“The floors had to be ripped up and lots of work had to be done,” added Minister for Grand Bahama Dr Michael Darville, who oversees aspects of NHI’s implementation.

Now, the facility is state of the art. At 33,000 square feet, it will be a place where dental and lab services will be provided.

Abaco currently has about three nurses and one doctor, Dr Darville said. By December, the island will have 16 nurses, five doctors, a radiologist and two lab technicians.

Charlene Bain, the director of public health, added that the overall health staff on the island will grow from the 20 that it has now to 70 by September.

The facility boasts an administrative wing, pharmacy and a morgue where autopsies will be performed.

Mr Christie noted during his speech that a similar facility is planned for Exuma, to be opened “in the shortest time possible.”

He also revealed that the Ministry of Finance has dedicated funding for a mini-hospital to be constructed in Palmetto Point, Eleuthera.

“It is important to understand that the improvements to our clinics will translate into improvements in the patient experience throughout out public health system,” he said.

In April 2012, The National Insurance Board signed a $12 million contract with Coastline Construction to create the new community hospital in Marsh Harbour.

At the time, the facility was scheduled for completion within 60 weeks.

Abaco residents have complained that the stalled construction left them to cope with “substandard” medical facilities.

Impeccable timing Mr. Christie!! Less than a month before the general election. Coincidence, I think not. I hope by know you have hinted on the sarcasm in my vernacular...

good that opened for Marsh Harbour, too bad the new baseball stadium is at a grinding halt due to the govt

It might be open today but this morning there was the usual crowd of people and vehicles outside the old clinic along the main road just south of downtown Marsh Harbour.

I understand that 'new' facility, initiated by the Free National Movement, was all but completed five years ago. I also understand the PLP refused to pay the contractor to complete the building and allowed it to lie fallow for five long years, during which time the staff at the clinic in Marsh Harbour walked out in protest as they could no longer tolerate the deplorable conditions there, including severe mould. I am very surprised the Abaconians actually tolerated the presence of the PM at the Healthcare Centre after such callous treatment, less than a month before the general election no less. He musie tink da people dem stupid! FIRE THE MAN!

Abaconians seemed to have lost their fight and independent spirit .......... They should have not even let him land on the airport ....... much less open a clinic that he deliberately sabotaged since 2012

Christie is an A$$. He need to get the F off Abaco.

Hatchet Bay. ???? Must be invisable improvements.

How many buildings have been opened and schools renamed in the past month?

IF IF IF the hospital is really "open" the sickening part is Perry LET people be sick and potentially die so he could play this fan far photo op right before elections.

Repeat: Perry, the PM, for five years let people get sick and die in Abaco so he could score some election points.

Abaconians are FED UP with the PLP. They could open 10 hospitals and Abaco will still go red.

No improvements have been made to Hatchet Bay clinic, James Cistern clinic was renovated with public donations, the ambulance service and fire service is 100% operated by volunteers and with no government assistance. Clinics lack basic medical supplies--- election rhetoric.

This healthcare centre obviously doesn't have a psychiatric ward because they certainly wouldn't have let PC leave in his current mental state.

Actually the dead only ever vote PLP so with the clinic finished but not opening for 5 years might actually be his only successful 5 year plan!