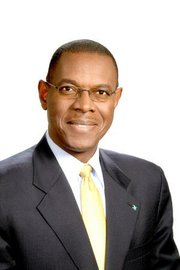 PROGRESSIVE Liberal Party Chairman Bradley Roberts lashed out at his former party colleague Vincent Peet last night, accusing the former North Andros and Berry Islands MP of being a “political enemy” who mounted an independent campaign because he was denied a nomination from the governing party.

Speaking to PLP supporters at a rally in North Andros last night, Mr Roberts said “this is war” as he urged the crowd to vote for incumbent Dr Perry Gomez, adding that a vote for Mr Peet is a vote for the Free National Movement.

“Our commitment to you North Andros remains unquestioned,” Mr Roberts said. “Each step of the way, your MP Dr Gomez has superintended these developments in your best interest.

“Our foundation is strong and firm and must move forward together because our work is not done, North Andros. We must not turn back the clock on Andros with the FNM who has no track record in North Andros.

“This brings me to the Vincent Peet factor. Let me be perfectly clear and frank. The role of the party is to assemble a group of leaders and a political machinery capable of forming a government through the democratic process.

“That said, I am here as the national chairman with responsibility for the party’s operations to circle the wagon and to aggressively close political ranks.

He said the PLP has “intelligence” that suggests the FNM is counting on Mr Peet to split the PLP’s votes.

“We are reliably informed that FNMs are saying that if Peet can syphon 100 votes from the PLP, then (FNM candidate Carlton) Bowleg can walk into Parliament without breaking (a) sweat. Well we know the devil was always a liar.

“Let the word go out far and wide and let it be known in Lowe Sound, Morgan’s Bluff, Nicholl’s Town, Conch Sound, Mastic Point, Stafford and Staniard Creeks that a vote for Vincent Peet is a vote for the FNM.

“There can be no backing away from this. This is war fellow PLPs. Vincent Peet your political enemy and cannot support your enemy. His political plot against the party that gave him political life and a national platform for many years is nothing short of treachery. He is clearly an interloper with your perennial enemy, the FNM.

“With hard work, an abiding faith and God’s help, North Andros will be in the winning column on May 10 and Dr Gomez will be returned to Parliament.

Earlier this month, Mr Peet announced his plans to run as an Independent, saying residents have urged him to return to politics.

At the time, he challenged incumbent Dr Gomez, who, he said, was given time to “find his footing,” but area residents feel that they have no representation.

Mr Peet represented the area from 2002-2012, but did not run in the last election after a controversy occurred involving $180,000 in client funds.

In spite of his decision to run against his party, Mr Peet expressed his longstanding loyalty to the PLP earlier this month.

I've never seen the PLP so scared of an election. IT OVER!!!! Law and order will replace corruption!!!!

boy Peet is finding out the hard way that in politics you have no friends.. its every man for himself...

If the PLP is so sure of its popularity why should the party fear the appearance of Vincent Peet in the arena? This campaign is looking more and more like 1992 and the PLP is well aware of what that means.

all FNM's are the ENEMY and must DIE... but i believe in Bahamians.....

I am Happy Mr. Peet is running. As a North Androsian, say what you want about Peet but Gomez can't drag his old slippers when it comes to looking after North Andros. Peet will cause the PLP this seat unless they spend some long dollars to buy Andros. Send the money, after that Salami people could use the cash. Crab on former Crab crime!

the plp eats its children

I can't imagine having to watch Gomez sleep in the House of Assembly for the next five years. He is embarrassing, so for Gods sake vote him out.