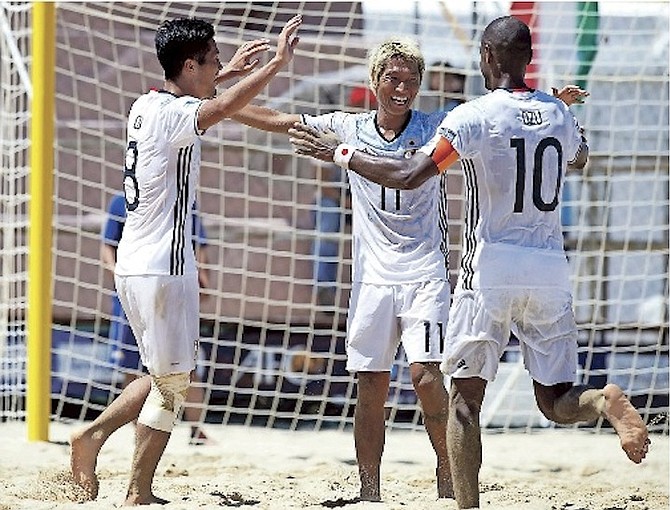 Japan were drawn in Group C at the 2017 AFC Beach Soccer Championship in Malaysia in March. After easing to respective 14-0 and 11-2 victories over Qatar and Iraq, they went down 5-4 to United Arab Emirates in a thrilling encounter.

Japanese hopes of winning the Asian crown ended with defeat to eventual champions Iran in the semi-finals, and it took a 6-3 win over Lebanon in the match for third place for them to secure their place at the FIFA Beach Soccer World Cup Bahamas 2017.

Coached by Marcelo Mendes, the Japanese once again drew on the considerable skills of Takasuke Goto at the Asian finals, the tournament’s second-highest scorer with 11 goals. There is more to the ‘Samurai Blue’ than just the experienced Goto, however. Strong in every department, they were also indebted to Takaaki Oba’s eight-goal contribution in Malaysia, while Takuya Akaguya and Ozu Moreira chipped in with seven goals each.

Japan have featured at every FIFA Beach Soccer World Cup and finished fourth at the inaugural competition in 2005. Following a series of first-round exits, the ‘Samurai Blue’ returned to the quarter-finals at Dubai 2009, and though another early elimination came at Italy 2011, the Asian side graced the last eight again at Tahiti 2013 and Portugal 2015.