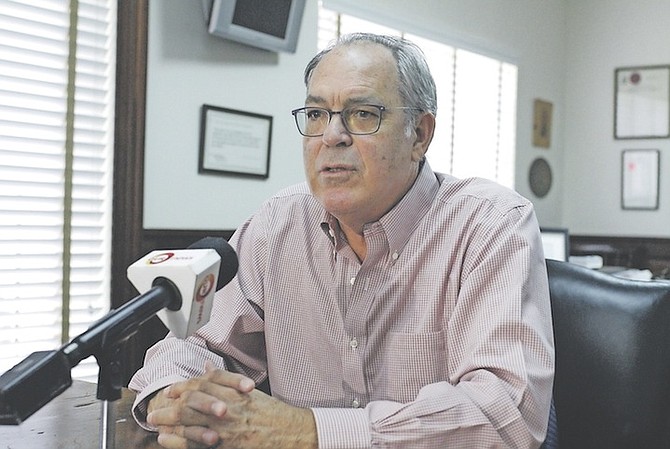 FORMER Deputy Prime Minister Brent Symonette leads the pack of a long list of millionaires and wealthy candidates who are vying for seats in the House of Assembly with a total net worth of $156m, according to financial disclosures submitted to the Parliamentary Registration Department.

According to the disclosures, Mr Symonette, the Free National Movement’s candidate for St Anne’s, listed his total assets as $159m with an income of just over $6.2m a year. His liabilities are $2.6m.

Among his assets, the Lyford Cay resident noted that he has $2.1m in a current account, $140m in securities and $10m in real estate.

However, Mr Symonette is not the only wealthy candidate on the list.

The declarations also show that Dr Minnis still has a contract with the Public Hospitals Authority, which is leasing a building from his company Leechez Investments at a rate of $7,500 a month. The contract began in May 2005 before he was a member of Parliament.

Prime Minister Perry Christie, the PLP’s incumbent for Centreville, listed his net worth as $2,029,151, which is roughly the same amount he declared in 2012. He was worth about $2.2m according to his declaration in 2007.

Political newcomer Bishop James Darling of the Bahamas Constitution Party listed his net worth as $48m. Bishop Darling, whose occupation is listed as a “minister of religion,” listed the bulk of this figure as $40m from securities.

He is vying to unseat Mr Christie in the Centreville constituency.

Other wealthy candidates of note include Minister of National Security Dr Bernard Nottage, the PLP’s incumbent for Bain and Grants Town, who has a net worth of $7.2m.

The PLP’s Tall Pines standard-bearer Leslie Miller has a net worth of $7m, with total income listed as $260,000, with $86,000 in salary, $54,000 in real estate, and $120,000 in other income. He declared having a contract with the government through his company Summerwinds Investments Ltd, which he said rents properties to the government.

PLP incumbent for Mount Moriah Arnold Forbes has a net worth is $3m with the bulk of this figure coming from real estate valued at just over $2m.

In the FNM, Elizabeth candidate Duane Sands has a net worth of $6m. FNM Golden Gates hopeful Michael Foulkes listed his assets as $1.1m.

The party’s Mount Moriah hopeful Marvin Dames listed a net worth of $1m while the party’s candidate for North Eleuthera Howard “Rickey” Mackey lists his net worth as just over $5m.

The FNM’s Fox Hill hopeful Shonel Ferguson has a net worth of just over $1m.

Her rival in the Democratic National Alliance Kendal Smith lists his net worth $1.1m.

The DNA’s candidate for South Beach, Randy Butler, has a net worth of $12.4m.

Independent Long Island candidate Loretta Butler-Turner has a net worth of $3.1m.

Not everyone running in the next election is a millionaire.

PLP Yamacraw standard-bearer Melanie Griffin listed her net worth as $561,439 and her rival in the FNM Elsworth Johnson lists his as $650,500.

FNM Bain and Grants Town candidate Travis Robinson has a net worth of $7,300.

Denise Rolle, a newcomer vying for the North Andros and Berry Islands seat, has a net worth of $1,500 with no salary or income noted.

The full list of financial declarations was published in The Nassau Guardian on Saturday.

I would venture a guess that NONE of these are accurate.

Still a bunch of lying racist arseholes though.....

Most of these people hide their money or assets in companies so they only have to reveal the assets they hold personally. For example Commonwealth Bank is valued at $1.4 billion. At least 50% of this bank is owned by the (Brent) Symonette family. There were only 3 siblings so Brent's value in CB is around $250 million. Then he has other companies including Bahamas Hot Mix. So Brent is worth more than half a billion dollars. And if you go down the list and see that basically all the candidates, at least in the top halfof the list, real assets or true net worth are undervalued, simply because they only have to declare their personal assets and their personal liabilities not what is in holding companies.

John I think Sir Franklyn Wilson is also a multi-millionaire or even billionaire by now.

Comrades! This Rich List is chiefly of those who didn't start their lives out living on the corner among the wealthier natives.
No damn wonder a select few will see May 10, 2017 - as their Financial Liberation Day!

a former candidate , defeated in 2012, once complained to me that he was 'broke'.

i told him, he declared himself worth 1.5 million in 2012. he replaied ; that was just bulshit.

in his 60's, he still rents an apt. and hardly gets any business.

Valuation for tax purposes is done differently from appraisals for insurance and commercial value. It is done basically on square footage. So if you have, marble tiles, high cedar ceilings, air conditioner etc, those things does not affect your value for tax purposes. Now hush before you cause all of our taxes to go up.

Yall forgot to read the fine print that says values expressed in units of 1000 :)