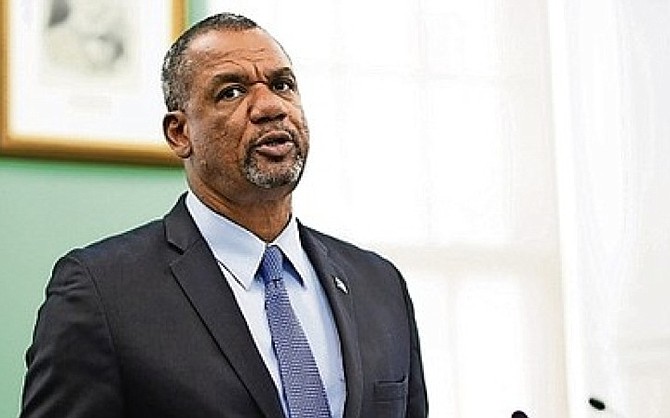 THE National Insurance Board (NIB) sought simultaneously to make a company owned by a Cabinet Minister’s mother the ‘broker of record’ for both its group health and property insurance business less than two months after the 2012 general election.

Documents obtained by The Tribune show that NIB imposed A Scott Fitzgerald Insurance Brokers and Agents Ltd into the existing medical insurance contract for its employees, which was held by BISX-listed Family Guardian, in late June, 2012.

The company, which is owned by the mother and family of Jerome Fitzgerald, Minister of Education, Science and Technology, was introduced as the group health insurance broker at exactly the same time as NIB tried to give it the same role for its property and casualty business.

The commission for insurance brokers is typically three per cent of a policy’s premium amount and, given the size of NIB’s workforce and multi-million dollar property portfolio, A Scott Fitzgerald Insurance Brokers and Agents would likely have earned a six-figure sum from these contracts according to industry sources.

Those sources suggested that the company’s insertion into a group health contract that had already been placed meant it stood to get “thousands of dollars” in commission fees without “doing anything to get it”. And they raised questions over whether A Scott Fitzgerald Insurance Brokers and Agents, as a relatively small company, would have had the manpower resources to handle an account as big as NIB’s.

Tribune Business revealed in 2012 the “grave concern” over plans to make A Scott Fitzgerald Insurance Brokers and Agents Ltd its general insurance ‘broker of record’, given that the company had not participated in the contract bidding process.

However, what was not exposed then, but has now been uncovered, is that NIB also granted the company the brokerage contract for its group health insurance business - a policy that would provide coverage for its near-600 employees.

There is nothing to suggest that Mr Fitzgerald or his family members have done anything wrong in relation to the NIB insurance contracts, and there is no evidence - unlike in the recent Baha Mar controversy - that the Minister sought to lobby for his mother’s company to get the business.

But letters obtained from an NIB employee, acting under condition of anonymity, emphasised that Family Guardian, not the national social security system, would absorb the costs associated with A Scott Fitzgerald Insurance Brokers and Agents’ commission.

A June 29, 2012, letter to then Family Guardian president Patricia Hermanns written by then NIB director, Algernon Cargill, said: “I enclose a copy of our letter to Allardyce Scott-Fitzgerald dated June 29, 2012, and write to formally confirm to your company that, effective immediately, A Scott Fitzgerald Insurance Brokers and Agents has been appointed as representative (broker of record) for NIB at the existing commission rate for NIB’s group insurance business that is currently placed with Bahama Health/Family Guardian under a contract that expires January 31, 2013.

“It is also understood that, as a result of this appointment, there is to be no increase in cost and/or decrease in the existing benefits offered under our group plans and, specifically, no direct cost to NIB.”

It is unclear whether A Scott Fitzgerald Insurance Brokers and Agents was replacing an existing ‘broker of record’, or whether the role was newly-created for it.

This idiot Toxic Fumes Fitz is a greedy corrupt thug on the scale of Sebas Bastian, Craig Flowers and Sir Snake! But Minnis will protect all of them (Perry, Shane, Allyson, etc.) from a Royal Commission of Enquiry and subsequent prosecution for their crimes, and not one of them will spend even one day behind bars!

Why will Dr. Minnis protect these gangsters?

Because when he looks in the mirror- he sees them.

I believe that Patricia Hermanns is Dr. Michael Darville's sister........emmmm.....and what position does she hold now????

Lord what next? Did his cat and dog also get a contract?

I really believe these gangsters (with the Prime Minister at the helm) made a pact to "protect and serve" each other - not the Bahamian people. Hence you gat Fitzgerald helping Gibson (Allyson), Gibson not prosecuting Gray; Shame helping Fitzgerald, etc. and the PM and nobody talking.

Keep silent! The Bahamian people will speak on May 10!

Yes, the Bahamian people will speak on May 10th. But we, the lowly people, will be left holding the bag (an empty Public Treasury and unsustainable National Debt) while the retiring well fed set of thieves are left to feast for the rest of their lives on their ill-gotten unjust riches. We then get to witness the new lot of very hungry thieves (led by the very greedy and power hungry Minnis) take their seats in parliament with every intention of outdoing their predecessors when it comes to royally screwing the Bahamian people. I'm now very tempted to consider moving to Florida like so many of friends with another passport have been lucky and smart enough to do!

and yet they can't seem to make their ill gotten gains multiply in ways that would prevent repeated trips to the public purse...

Comrades! Well I'll play the donkey's ass....Just when you thoughts there couldn't possibly be any more moving parts - then there was NIB's insurance coverage for near-600 employees?
Might I remind you that this is the same NIB cash cow who when ran under Papa Hubert's red regime - wrote a $11 million cheque to subscribe to a foreigner owned company to produce Beer.
NIB subscribed cause the smart financial investors, didn't subscribe to the $11 million public offering?
NIB, just like Bank of Bahamaland - has a long track record of bending over - that is under certain special circumstances.

I bought this stock and it has performed very well.

Now I would have bought BTC but Perry them won't share.

Lord help us, and I mean that in the 100% religious context. Cuz some serious darkness going on here

Comrades! Is there some reason why the Guardian Talk Radio's - The Revolution Hosted by Juan McCartney, has been running previously recorded shows in his time slot? Could it have something to do with the show's Jerome coverage?

At least the Bahamian people got an INVESTMENT. It is still right there at NIB paying dividends. How is that corrupt? Many Bahamians who where smart invested as well and have MADE money off of that investment.

Comrades! Back to the important peoples basics....How many "new" schools were built and opened under Minister Of Education Jerome's tenure?

Small wonder the education system in this country has fallen even further down the drain.

Bradley Roberts has to be the devil! The wrongdoers are keeping mum while Roberts is rushing to any mic to defend them! This whole crew needs to go!

The fact they are defending and keeping Fitz as their man is just what you would expect from the Plunder, Loot, and Pillage party. They just do not understand ethics, morals, or for that matter honesty. Corrupt SCUM!

So have it that this guy held the Rubis oil spill from his very own constituency because he claimed to have fear over losing his job but this S.O.B risk the lives and health of innocent people because he was too busy breaking laws and worrying about how much money to steal from the people. This is nothing to be proud of at all highly damn shaming.

Comrades! The VAT Minister Michael Halkitis stood before a convention of PLP delegates to claim that VAT revenue was being invested in new schools....However, how is it Halkitis did not known that NOT EVEN ONE - not a single new school has been built under this 2012-2017 PLP administration....It does make you thinks - this PLP cabinet are conspiring to keep public needs to know business things well hidden from the population!

there is a school being built in West End for sure and a fire station in Freeport.

If there was no wrong done by him or his family why is this a story? when he wins his seat all of this will be put to rest. Why is he constantly being attacked?

What a low life piece of worthless dung this guy turned out to be!!

They say FNM's are Mean Spirited and you folks prove them true with every post.

Birdie is correct that there are mean spirited people out there.

We can start with people who assist and supported CCA in its quest to rip Izmerllan off of several hundred million dollars just because they did not get the contracts that they wanted.

Mean spirited because they were happy to delay, by two years, Bahamians from getting jobs.

Why are all these PLPs of Caribbean-descent so wicked and greedy????? ....... What is about Pindling that created this kleptocratic class of first and second generation immigrants that have Pillaged, Looted and Plundered our country?????? .......... they are the Black Pirates

Regardless 4 years, 8 months ago

....don't insult the pirates. They had far more honor.

The man borrowed money from the Chinese bank. He diid not honor his side of the agreement. remember Mr Lightbourne and hnunders of Bahamans who have lost their homes and businesses are they less than Mr; izmarlian? perphas in you all view. not in mine.

Birdie, I've decided to stop insulting you. I have realised that you don't have the faculties to honour yourself or the truth or even the rational faculties to overcome your blind partisanship. Or .... you are a paid agent of the PLP, in that case you don't have the moral compass to stand up for patriotism for your country. Either way, there is no way forward on your road to enlightenment, so I for one will stop insulting you. God Bless. Whoever you are and whatever you are, I hope that you make your way with honesty and truth in this highly dysfunctional country and populace.

Reading Dr. Mike's series, especially the one on hate, made me realise that I een contributing to anything by spewing venom.