Festival Millions - Where Did They Go? 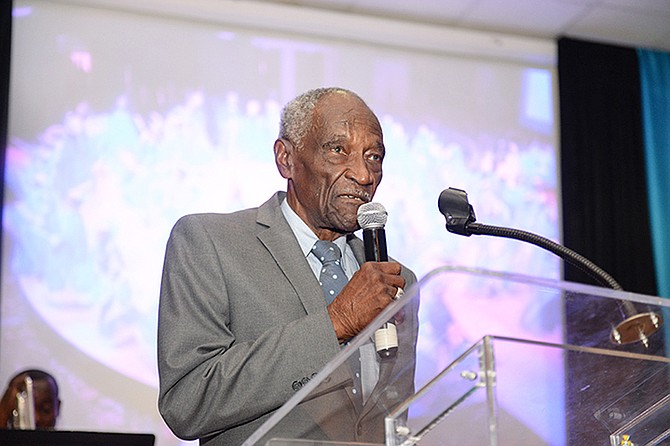 FORMER Assistant Commissioner of Police Paul Thompson, who celebrated his ninetieth birthday Saturday evening, has offered to investigate the first two Junkanoo Carnival festivals “free of charge” so long as the Minnis administration provides him with the necessary staff to conduct the probe.

Mr Thompson, who joined the Royal Bahamas Police Force at the age of 23 from his native Trinidad, told his guests at the birthday party given in his honour at the Paul Farquharson Convention Centre, East Street, that being from Trinidad he was very familiar with carnivals and festivals, but he never knew any of them to cost as much as those in the Bahamas.

His guests burst into laughter when he told them that now that he was 90 years old he could say what was on his mind without fear of consequences. And on his mind was a desire to find out why the Bahamas’ festivals were so expensive.

He said he believes a police investigation into these matters would lead to court action.

Mr Thompson, a long-time Bahamas resident, said his proposal is aimed at answering the many questions surrounding the two controversial events, along with validating the former government’s justification for spending approximately $21m combined on both festivals.

Mr Thompson also said he would offer to investigate, under the same conditions, the $650,000 spent by the former Christie administration on the failed 2016 Caribbean Muzik Festival.

In 2015, the government spent $11.3m on the inaugural Bahamas Junkanoo Carnival festival, going over its initial budget of $9m, with the rest covered by sponsors. The first Junkanoo Carnival cost $12.9m overall.

The government reaped $8.3m in combined direct and tax revenues, with the latter providing $6.7m of that sum.

Last year, the Bahamas National Festival Commission (BNFC) revealed that the 2016 version of the festival cost $9.8m with a government subsidy of $8.1m. The event attracted $1.2m in sponsorship while ticket sales and ‘other revenue’ accounted for $578,342.

Earlier this year, officials said the Christie administration would slash the subsidy for the event by as much as 50 per cent for the 2017 incarnation.

Officials have also said the festival has succeeded as a stimulant for small and medium businesses, 278 such businesses and 696 people benefitting directly from the expenditure related to last year’s festival.

In an interview with The Tribune, however, Mr Thompson suggested the figures previously provided by officials do not give a concise breakdown of exactly how the millions of dollars were spent.

“My point is, I did not see $12m being spent on our first carnival and $9m on the second,” Mr Thompson said. “And the reason why I say that, well I feel justified in saying that too because there was never a proper accounting as to how $12m and $9m was spent.

“They gave some figures, but nobody came out and said this is what was spent for labour costs, fencing costs, stage costs and all that type of thing. We never got that. And I believe there’s reason for a proper audit of that $12m and $9m, and I hope (the Minnis administration) doesn’t forget about it because that should happen.

“Where was $12m spent?” Mr Thompson asked. “Unless they paid the committee and paid some people some huge sums that we don’t know about. And $9m the next year; you already have generators, the fence was up, you already have the stages, what was $9m spent on?”

Prior to the debacle surrounding the event, the Caribbean Muzik Festival was a part of the former government’s efforts to fill the Bahamian calendar with musical and sporting events that would promote culture, encourage commerce and put a spotlight on the country’s tourism products year-round.

The festival was produced and promoted by a company called Caribbean Republic Inc. The Ministry of Tourism was the event’s biggest sponsor, having invested $650,000 in the festival.

However, the four-day festival was postponed after two nights of inactivity. The debacle spurred a war of words between former Tourism Minister Obie Wilchcombe and former Attorney General Alfred Sears, the latter having served as a director of Caribbean Muzik Festival (2000) Ltd. In July, Tourism Minister Dionisio D’Aguilar confirmed the government was seeking to secure legal counsel in its effort to recover the $650,000 lost as a result of the failed event.

However, lawyers for the principals of the Caribbean Muzik Festival hit back, suggesting the government failed to live up to many of its contractual obligations.

“So what $650,000 was spent on?” Mr Thompson asked. “As a police officer I have a suspicious mind, and I look for answers. And I believe the Bahamian public should be looking for answers to those questions.

“…That $650,000, we want to know what happened to that,” he added. “At least we should satisfy people that the money was properly spent. I’m really, really interested in knowing what cost $12m and what cost $9m and what cost $650,000. Those are more important than BAMSI and all of them, because you could see something is wrong there.”

Sooooo, why is this ole Bajan so fired up to investigate Kanaval??? ...... lol

He is from Trinidad and therefore not a Bajan but Carnival should be investigated.

Sorry about the mix-up in nationality ........ but he comes from that background in Carnival .............. ours should be renamed Junkaval or Carnavoo

It's the tie-in of these costly Junkanoo Carnivals and Music Festivals to the numbers' boss, Sebas Bastian, that should be fully investigated, but not by Thompson - he's too old to lead such an investigation. Sears is integrally tied to all of the shenanigans that went on behind the aborted music festival.

Well let someone else do the investigation and let Mr. Thompson tell us again what we already know.... all the bloody music fests were scams and methods for the PLP to either flat our steal the money or funnel contracts to their friends who in turn pay themback....

Who does Sebas and the other 7or 8 numbers houses work for??????? That is the real investigation that MUST take place ......... before it is outlawed.

Who does Sebas and the other 7 or 8 numbers houses work for??????? That is the real investigation that MUST take place ......... before it is outlawed.

well I know that I was never paid for items produced for the music festival, luckily it was not too much and the business just absorbed the loss. I hope they found out which crook ended up with the money.