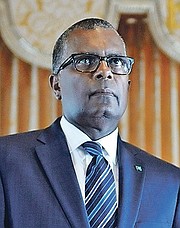 IN the wake of calls from Prime Minister Dr Hubert Minnis for the Progressive Liberal Party to say "sorry" for the actions of the Christie administration, PLP Senator Fred Mitchell is adamant the only apology he will offer is to former Prime Minister Sir Lynden Pindling for allowing the country to be turned over "to a set of gangsters and crooks dressed up in white gowns" calling themselves the government of The Bahamas.

While the former Fox Hill MP said he could not speak for the former governing party, Mr Mitchell said the prime minister will get "no apology from me".

His comments came while speaking to PLP supporters at a branch meeting in Bailey Town, Bimini on Wednesday night.

A day earlier, Dr Minnis told reporters that while he appreciated PLP Leader Philip "Brave" Davis' admission the opposition party made mistakes during its last term in office, he was still waiting to hear "a real apology".

Dr Minnis said he listened "attentively" to Mr Davis' address to the nation on Monday night and said he noticed the words "I am sorry" were missing.

"I saw some headlines saying that the prime minister wants an apology from the Progressive Liberal Party," Mr Mitchell said Wednesday night.

"Now I can't speak for the Progressive Liberal Party, but let me tell you what my personal position is: he'll get no apology from me except this one. I want to apologise to Lynden Pindling for allowing this country to be turned over to a set of gangsters and crooks dressed up in white gowns calling themselves a legitimate government of The Bahamas. That's what I want to apologise for.

"We are at risk of reversing ourselves to a pre-1967 period. So that's the fear I have. So I apologise to the man who has gone on above because we have some work to do to get back to where we were."

In his national address Monday night, Mr Davis admitted the former government was not perfect, made "serious" mistakes and lost the "trust" of Bahamians, but offered no outright apology for the missteps of the previous Christie administration.

Instead, he sought to justify the former governing party's actions saying that during its last term in office the Christie administration was always thinking of the people affected by its policies.

At the time, Mr Davis said: "Our previous administration was not perfect.

"We made mistakes, including some serious ones. But we were always especially mindful of the people impacted by our policies - we did not and do not think in terms of statistics, but in terms of individuals, people, families, neighbours, friends. We know the people who will be helped when the government does good, or harmed by an ill-considered government slash-and-burn policy.

"In considering the human impact of government policy, we have always been steadfast. The frustration and sense of hopelessness amongst our 'poorly-guided young men' will only grow if the government cuts off their educational, economic and social lifelines, and its expression through criminal activity will only increase," he said, referring to the government's announced austerity measures.

If you are looking for him, you will find him in the same place as Pablo Escobar. They are together reminiscing about the good old days and sharing some good jokes.

If I were Mr. Davis, I'd be very worried. I'd be asking myself not if, but when, the anti-corruption unit will be knocking on my door. The cheek and brass of these PLPs continues to amaze me. You'd think the lot of them would just fade away, and sit quietly in a corner somewhere, and not want to attract any more attention to themselves after running the Bahamas into the ground.

Fred Mitchell is obviously still bitter, angry and still in unbelievable shock after the May 10th shellacking the electorate rightly dispensed on Pillage Loot Plunder.

Poor Fred & the boys dem have totally lost their power base. Now suddenly finding themselves in here to date uncharted waters with the "new sheriff in town".

SIT SMALL Mitchell! We the people have rejected all of you after you abandoned us 4 decades ago.

Fweddy does not care about Bahamians ........ He sees himself as a globalist with First World status and a UN elitist ........... He is not a bona fide Bahamian

Members of the diplomatic community the world over have never taken Fred seriously about anything. They will tell you that he's been on the butt end of many good jokes made behind his back at international conferences and meetings. He's literally seen to be, much to the embarrassment of our country within the international community, nothing but a laughingstock! The U.S. government has in fact documented him to be an individual steeped in racist beliefs with strong anti-American sentiments.....AND THE WHOLE WORLD KNOWS THAT TO BE TRUE!

Wow, what utter nonsense! The Bahamas would certainly be better off if you are never again elected or appointed to any public office. It is my sincere hope that you and those who believe as you do will NEVER represent me or this country ever again.

Fweddy is nothing more than a racist. He is an embaressment to the Bahamas and should never have held public office.

Fred Mitchell shows all of the attributes of a sociopath. That he is or was a politician should worry us all.

Fred Mitchell (like his ex-con brother Matthew) has always had loose screws and will always be mentally unstable to say the least. The pharmaceutical industry the world over has yet to develop medication that might be of help to him......his many undesirable qualities seem to be attributable to a poor gene pool, possibly combined with poor social upbringing. In any event, he is now for all intents and purposes irrelevant to Bahamian politics and that will be the case forevermore. Good riddance Fred!