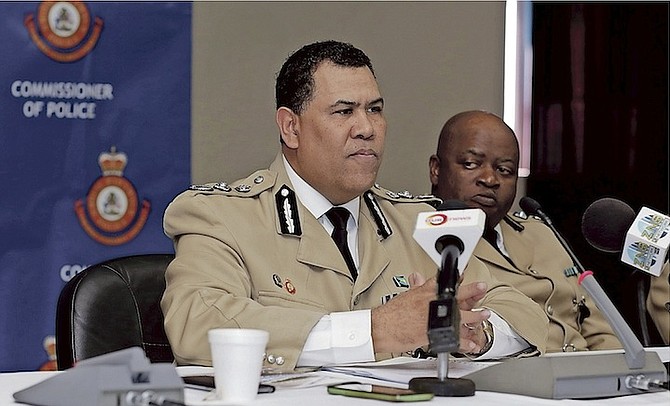 AGAINST alarming homicide numbers and weeks of uncertainty over the police force’s hierarchy, National Security Minister Marvin Dames yesterday skirted questions on the status of Police Commissioner Ellison Greenslade amid speculation that he is considering a top foreign post.

In the weeks since these reports first surfaced, Commissioner Greenslade has remained out of the spotlight.

“We are in the business of governing,” Mr Dames told reporters outside of Cabinet on Tuesday morning.

In mid-July, The Tribune reported that it is understood that Commissioner Greenslade has been offered the post of high commissioner to London and was set to be replaced by Deputy Commissioner Anthony Ferguson.

It was also reported that Deputy Commissioner Emerick Seymour, now in charge of Freeport, will be transferred to Nassau as deputy commissioner.

As these reports surfaced, former Assistant Police Commissioner Paul Thompson told The Tribune he had also heard rumours that Commissioner Greenslade was being “forced out” of the Royal Bahamas Police Force. He said he was “very disappointed” by the reports.

Mr Cash suggested the optics of removing the police chief would make it hard for his successor to seem to be politically neutral.

He insisted that Commissioner Greenslade should not leave his post quietly and should instead force the government to fire him.

Mr Cash at the time added if there is justifiable cause for the commissioner to be removed, the government must inform the public.

Despite these views, however, there has been no clarification on how the government would move forward with Commissioner Greenslade.

Since the May 10 general election, there have been 30 homicides, according to The Tribune’s records.

When asked about what the Minnis administration was doing to mitigate violent crime, Mr Dames promised “scientific and methodic approaches” were on the way, contending that issues facing the country had not manifested overnight.

“As I continue to say, this is a problem that has manifested itself over the decades and it’s a result of our failures as families (and) as Bahamians; and so the sooner we come to grips with that, the better we will be,” the Mount Moriah MP said.

“And that’s why we as a government continue to say that we intend to take a multi-agency approach to this problem; it will not be ad hoc. Most people would like to see a quick fix, we all would certainly, but this is not a quick fix thing.”

Mr Dames said the Minnis administration is in the process of bringing bills to Parliament that will contribute to what the government is hoping to achieve in the long run.

He said the bills will bring about programmes that will see the community, the police and all stakeholders playing meaningful roles in assisting and reducing the problems with violent crimes.

“We will put in place scientific and methodic approach to address this problem but one thing is certain whatever we do moving forward, we will invite all spheres of society.”

Comrades! The pretend uncertainty over Greenslade's future does lends more credibility to the belief shared by many red shirts that PM Minnis early targeting Four- red shirts by appointing them crown cabinet ministers? By-elections may be coming sooner than the opposition parties could have first imagined?

Commissioner Greenslade deserves respect. It seems to be the FNM way to disrespect as many as they can . Then lie . it is all right. They say God does not like ugly.

"God does not like ugly" Indeed. Why do you think the PLP were kicked out of office then?

Where the hell was Commissioner Greenslade when Pillage Loot Plunder was running wild in the Treasury?

Under the Police Act any serving officer of or above the rank of inspector after they have serve 30 years they work at the pleasure of the Government, they are pensionable. The government can do what they want after 30 years, most civilians don't understand that, but once you have 30 years and carry the rank of Inspector or above you can be let go.

“We are in the business of governing,” Mr Dames told reporters outside of Cabinet on Tuesday morning.

He thinks governing is repeatedly refusing to account to the nation on this very important matter?

Lol this guy is hilarious and definitely in over his head.

"We are in the business of governing"...

You Moron, as minister of national security making determinations with the armed forces is a part of your government appointed portfolio.

Who's advising this guy?

Mr. Dames is right not to respond to this question. There is never a need to respond to every rumour or innuendo when a mike is shoved in your face by a lazy reporter. When the appointed time comes, the public will learn of Commissioner Greenslade's fate. Until then, everyone should sit small.

There really is nothing here for Dames to say and thankfully he knows it.

The vast majority of us already know its high time for Greenslade to relinquish his post and go fishing on anyone of his several yachts. He must know that he long ago lost the public's trust and that the present unsolved murder count for the year-to-date is around his neck, as it rightfully should be. Greenslade will receive a very generous pension by most standards, one that many of us would love to be so fortunate to have. Accordingly there should be no need for our new government, as resource strapped as it purports to be, to find him a plum cushy post anywhere else at the taxpayers' expense. Greenslade should know there is no upside to staying on - only considerable downside. It therefore only remains for him to do the right thing by the Bahamian people, his family and himself - Resign.