Bronze For Shaunae In The 200m 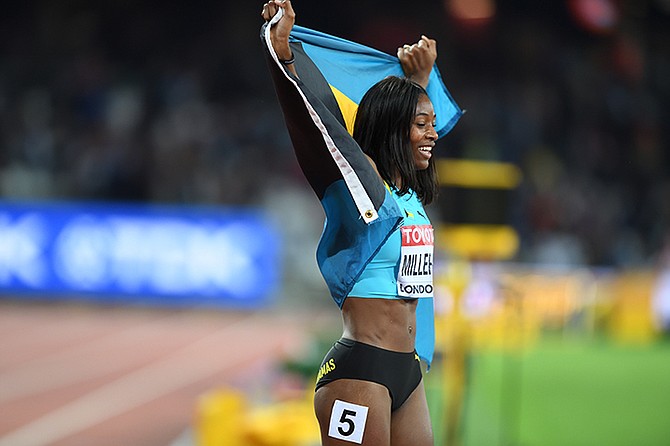 LONDON, England: Shaunae Miller-Uibo didn't get the IAAF World Championships' 200/400 metre double, but after six hectic and unexpected days of intense competition, she will walk away with a bronze medal.

Putting away the disappointment of slipping from the podium to fourth in the 400m on Wednesday night, Miller-Uibo came back on Friday night and earned a hard fought third place in the 200m final to add to her Olympic gold in the 400m last year in Rio de Janeiro, Brazil.

Her time of 22.15 seconds in the final event on day eight of the 16th IAAF World Championships wasn't enough to catch Dafne Schippers of the Netherlands, who successfully defended her title in a season's best of 22.05 or Marie-Josee Ta Lou of the Ivory Coast, the second place finisher in a national record of 22.15.

While Schippers (bronze in the 100m) and Ta Lou (silver in the same event) celebrated with their second medal of the championships, Miller-Uibo was just elated that she will collect some hardware.

"I just thank God so much for it," said Miller-Uibo after taking her victory lap and sharing the moment with her family members and friends. "It was a fun, but very competitive race. That's how I like it.

"I like it when the girls bring their A game and they brought just that. It was real competitive and a fun race. The girls were amazing athletes and I just enjoyed the race from the very beginning to the very end. My speed kicked in a little late, but I'm just glad that God brought me through to collect a medal."

She added that she intends to go for the 200/400 double again at the 2019 World Championships in Doha, Qatar.

It was the second medal at the championships for the Bahamas following the silver from Steven Gardiner in the men's 400m. That pushed the Bahamas in a two-way tie with Hungary for 22nd spot on the table.

Miller-Uibo, 22, had power from behind after she came off the curve in sixth place. She used her 6-feet, 1-inch frame from lane five to reel in Americans Daejah Stevens (seven) and Kimberlyn Duncan (nine) as well as Great Britain's Dina Asher-Smith (eight).

But she didn't have enough real estate at the end to pass Schippers and Ta Lou who took the top two spots. Miller-Uibo, in taking third, became only the second Bahamian to medal in the race at the championships.

Debbie Ferguson-McKenzie holds the distinction of being the first, having finished second, but then being elevated to gold due to the disqualification of American Marion Jones in 2001 in Edmonton, Canada. She also picked up a bronze as well in 2009 in Berlin, Germany.

The race also featured Bahamian Tynia Gaither, who joined Miller-Uibo in making history as the first two to represent the country in the half-lap race in the championships.

But the 24-year-old Gaither, nursing a slight injury from securing her berth into the final, had to settle for ninth in 23.07 in her debut in a global event.

"This one was actually more fun than the others," she stated. "I was just going in there to try and execute what I did in the heats and the semis. But I'm done."

Competing against what she called "the best" competitors on the planet, Gaither said it’s an inspiration for her as she looks towards the future. But if there's anything she wants to do now, it's "rest”.

On hand to congratulate the pair of Bahamians before he returns home on Saturday was Minister of Youth, Sports and Culture Michael Pintard.

"We are proud of our athletes, especially Shaunae and Tynia, who both made the final," said Pintard, who was accompanied by his Director of Sports, Timothy Munnings.

"It puts us in good stead for the future, She brought home yet another medal. She has an incredible future ahead of her and her and the other athletes here are an inspiration to the country, no matter what, we will be in their corner supporting them."

Hopefully both Miller-Uibo and Gaither will be ready to go on Saturday when the heats for the 4 x 100 and 4 x 400m relays are contested.

At 5:35 am EST, the women's 4 x 100 team will run out of the last of two heats in lane three, sandwiched between Trinidad & Tobago and the Ukraine. Jamaica will occupy lane five. The United States will head Group A in lane four.

The top three finishers in each heat and the next two fastest finishers will go to the final at 4:30 pm EST.

Following them, the men will go at 6:04 am EST in lane nine in the second heat as well. They will have Canada in two, Jamaica in three. The USA will again run out of heat one in lane eight.

Like the women, the top three finishers in each heat and the next two fastest finishers will go to the final at 4:50 pm EST.

Also on Saturday, the women's 4 x 400m team will run in lane two in the first of two heats at 6:20 am EST with the United States and Great Britain in three and four respectively. Jamaica will head heat two in lane eight.

The first three in each heat and the next two fastest finishers will move on to the final, scheduled for Saturday at 3:55 pm EST.

At 6:50 am EST, the men's 4 x 400m team will run from lane four in the first of two heats with arch rivals Jamaica in eight. The USA will be in nine in heat two with Trinidad & Tobago (eight), Botswana (seven) and Great Britain (six).

Again, the top three in each heat and the next two fastest finishers will move on to the final, scheduled for Saturday at 4:05 pm EST, bringing the curtain down on ten days of exciting competition.

The coaching staff have up until one hour before the start of the relay to disclose the quartets that will run in each event.

Congratulations to both of these ladies for making it to the final. Not everyone in a final is going to medal but those that do can only do so because they are in the final. Ms Gaither is young enough that she has opportunities to return to more finals in the future and hopefully medal then. Mrs Uibo has added to her cache of medals and hopefully will return to future finals and win medals of other colours. They are both to be congratulated for the fruits of their hard work and their coaches congratulated for preparing them to get to this position. Well done and much future success.

She should get a bronze just for that body..ok gold den!