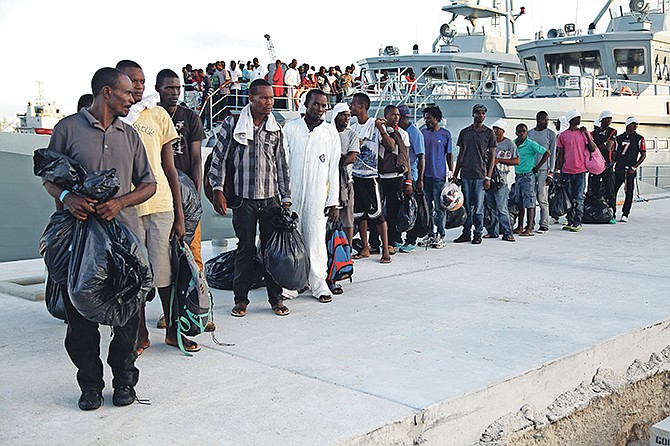 MORE than 150 Haitian migrants were apprehended in waters off Ragged Island last week, according to law enforcement officials.

According to a statement released by the Royal Bahamas Defence Force Public Relations Department on Sunday, some 151 Haitian migrants were apprehended in two separate incidents between August 9 and 11 in waters of the southern Bahamas.

This brings the number of apprehended Haitian migrants to more than 640 for the year, officials added.

“On August 9, the US Coast Guard vessel with a defence force ship rider on board apprehended 73 Haitian migrants aboard a freighter,” the statement said.

“Under the Comprehensive Maritime Agreement between the US and The Bahamas, defence force personnel are permitted to conduct tours of duty aboard US Coast Guard vessels and to arrest persons engaged in illicit activities in Bahamian waters.

“A Coast Guard vessel also apprehended a second group of 78 persons on August 11 in waters north of Ragged Island. All migrants apprehended in both incidents were subsequently transferred to the defence force patrol vessel, HMBS Arthur D Hanna, under the command of Lieutenant Commander Berne Wright for transport to New Providence.

“This latest group brings the total Haitian migrant count apprehended in Bahamian waters for the year to over 640 as a result of (the) defence force conducting its own patrol operations, as well as RBDF joint operations with the Bahamas immigration and US Coast Guard authorities,” the RBDF said.

“The 151 undocumented migrants arrived earlier this morning (Sunday) at Coral Harbour and are currently under the supervision of Immigration officials for further processing,” the RBDF added.

Just last month, on July 30, the RBDF, assisted by the Royal Bahamas Police Force and the Dept of Immigration, apprehended 57 undocumented Haitian migrants onboard a 30ft wooden sloop off Humming Bird Cay near mainland Exuma.

Then on July 25, 120 Haitian migrants were apprehended off Long Island.

On July 3, a Haitian sloop was intercepted on the Great Bahama Bank west of the Exuma chain by Her Majesty’s Bahamian Ship Lignum Vitae under the command of Senior Lieutenant Bertram Bowleg around 2am. The vessel was subsequently boarded and searched resulting in 69 migrants (58 males, ten females and a child) being apprehended.

The wooden vessel was initially sighted by a RBDF surveillance aircraft piloted by Chief Petty Officer Gregory Storr earlier that day when HMBS Lignum Vitae, which was on routine patrol at the time, was directed to intercept.

The migrants were taken to New Providence and turned over to immigration officials for further processing.

According to statistics, the Department of Immigration arrested 7,357 persons in 2016. Of that figure, 6,869 persons were deported and 488 foreign nationals were released.

Haitian nationals were the highest number of repatriations with 5,241 for 2016. The figure represents a 65 per cent increase over 2015’s total of 3,183 persons.

Repatriations of Chinese nationals increased by 16 per cent in 2016 with just 10 more persons repatriated over 2015’s total of 63.

These are only the illegals who get apprehended. Surely the leaders of the countries of the immigrants and the country to which they are attempting to migrate should collaborate to make this venture less attractive. What of the punishments meted out to the smugglers themselves? We have more than enough unemployment in this country as the figures seem to indicate, housing problems, health system in crisis, over-crowded jails, Government with bare cupboards and massive debt. The great U.S. of A. that apprehends these illegal immigrants seems to want no part of them. Is this the way they PROTECT their neighbours?

“Under the Comprehensive Maritime Agreement between the US and The Bahamas, defence force personnel are permitted to conduct tours of duty aboard US Coast Guard vessels and to arrest persons engaged in illicit activities in Bahamian waters." Can anyone expand on this? Do the U.S. get the smugglers and we get the smugglees? Is there any financial contribution from Cousin Sam for the retention and repatriation of the smugglees?

The country from which they leave has no grass to cut or trees to trim or farms to maintain. There is nothing in Haiti for these people to do. They must leave in order to keep their families alive.

Nothing to do with us & NOT OUR PROBLEM

They must accept the consequences of their actions and deal with the cards they dealt themselves.

Why must Bahamians be responsible and pay for Haitians self-inflicted wounds?

Get these parasites OUT of our country!

SP, why are you sounding like a demon right now?

There are huge resources of gold and other minerals in Haiti. It would seem that the majority of the population is unaware of this fact...........

U.S. Border Patrol personnel from U.S. Customs & Border Protection (a division of U.S. Department of Homeland Security) are now operating large drones to assist U.S. Coast Guard in tracking and intercepting these illegal aliens within Bahamas territorial waters. U.S. refuses to let any of the illegal aliens captured in Bahamas territorial waters set foot on U.S. soil. Bahamians are made to bear all medical treatment, temporary detention and repatriation costs for these illegal aliens. This works out great for U.S. taxpayers and the State of Florida when you consider that most, if not all, of these illegal aliens have the U.S. as their desired final destination. Not a good deal for us Bahamians at all.

Hmm. Sounds par for the course. Not a good deal for us at all. Wonder who has drones in the Mediterranean?

Perhaps the US should pull back and stay on our side of the Gulfstream and let the RBDF handle it all. You want it both ways, you want your sovereignty AND uncle sam too.These Haitians were interdiction in Bahamas Waters. I suppose none of these Haitians might want to go to Abaco.