Alonzo Russell: We Could Really Have Used Gardiner In 4x400 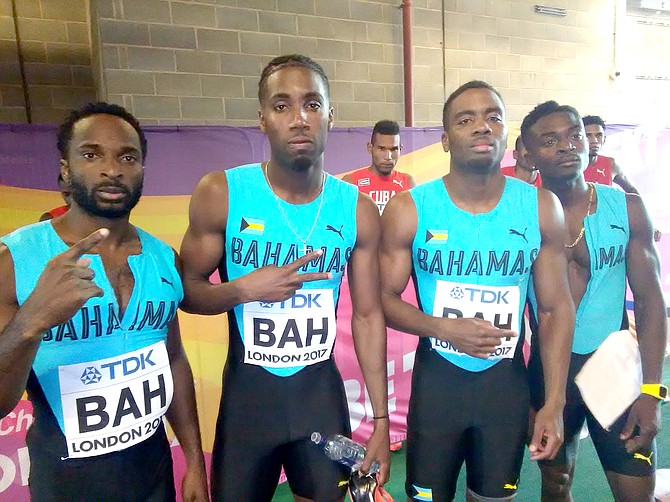 ALTHOUGH they went out and gave it their best shot, Grand Bahamian quarter-miler Alonzo Russell said the Bahamas team could really have used silver medalist Stevie Gardiner in the heats of the men’s 4 x 400 metre relay at the 16th IAAF World Championships.

Following the team’s dismal showing in London, England on Saturday where they finished seventh in their heat and 11th overall, fingers have been pointed at Gardiner, who stated that after three grueling rounds of the 400m, he was only prepared to run in the final.

But Russell claimed on their arrival in London the week leading up to the opening of the championships, Gardiner made it crystal clear to them that he wasn’t prepared to run with them at all.

“I thought it was selfish because within the first couple of days when we arrived in London, we (Russell, Ojay Ferguson, Kendrick Thompson and Ramon Miller) were informed by him (Gardiner) directly that he did not have any plans to run with the relay team,” Russell said.

“He said that as soon as the 400m is done, that will be it for him. I made sure I let the coaches (Dianne Woodside-Johnson and Rupert Gardiner) know the very moment it was said so that there would be no surprises at the end.”

Russell said the coaches said not to worry bout it because they would handle it.

Without Gardiner, Russell led the team of Mathieu, Ferguson and Miller to a seventh finish in their season’s best of three minutes and 03.02 seconds. That was 11th overall, leaving the Bahamas without one of the eight lanes in the final on the closing night of the championship

Trinidad & Tobago went on to stun the United States of American for the gold. Great Britain picked up the bronze medal.

“Being honest, I think we would have won the heat and qualified for the finals if he ran,” Russell said. “Looking at the numbers, Steve most likely would have shaved two seconds of the total time since his time of 43.89 is far beyond Michael’s season best of 45.-9, Ramon’s 46.1, Ojay’s 46.4 and my own 45.5,” Russell projected.

That was then and this is now. Another year, a different team.

“We remained positive about it and just went in the race with the hopes of advancing to the final,” Russell said. “I assured the guys that I will pop off and put them in a good place to set the tone.”

Russell, in producing WhatsApp messages that they all shared in their group congratulating Gardiner after he lowered the national record in the semifinal and again after he won the silver medal, said they were hoping that the medal winner would have a change of heart and run with them.

“Even if Steven decided that he wasn’t running the first round with the team, I thought he should have show us some support and attend the relay practices, relay meetings organised by the coaching staff, but he wasn’t there,” Russell said.

The Bahamas came into the championships ranked at number nine in the standings with their time of 2:58.49 that they ran in the semis of the Olympic Games last year in Rio de Janeiro, Brazil. The Bahamas got the bronze in the final.

The Bahamas have not medaled in the championships since the team of Avard Moncur, Mathieu, Andrae Williams, Brown and Nathniel McKinney (who ran in the heats), got the silver in 2007 in Osaka, Japan.

This was the second straight appearance that the Bahamas failed to get into the final at the championships.

The team of Brown, Demetrius Pinder, Mathieu and Miller clocked 2:56.72 for a national record breaking performance as the Bahamas won its last global medal with the gold at the 2012 Olympics in London.

Call it for what it is. I'm happy the Tribune decided to release this story as well, which provides a contrast to a previous story highlighting Gardiner's original comments to the media " [[[[[[[[]]]]]]]]

“I’m an adult. The reason why I didn’t go out there was because I told her I wasn’t feeling well and I was going to jeopardise myself for a relay team and get hurt,” he said. “It’s not that I was saying that I wasn’t going to enjoy running the relay. I told her that I was tired." [[[[[[[[]]]]]]]]]

Congrats to the Bahamas and Gardiner for his silver medal performance in the 400M......... - Disappointed (for other reasons) Supporter

You have to be really mature not to give payback when the time arrives. Gardiner harbored a lot of ill-feeling in the manner the Golden Boys and the coaches treating him over the years. When he did get a chance to prove himself he was criticize for the botched relay leg he ran when he went out too fast and was past be several competitors denying the Bahamas a medal. He finally got his chance for payback. That may very well be the fuel for his success. The saga continues.