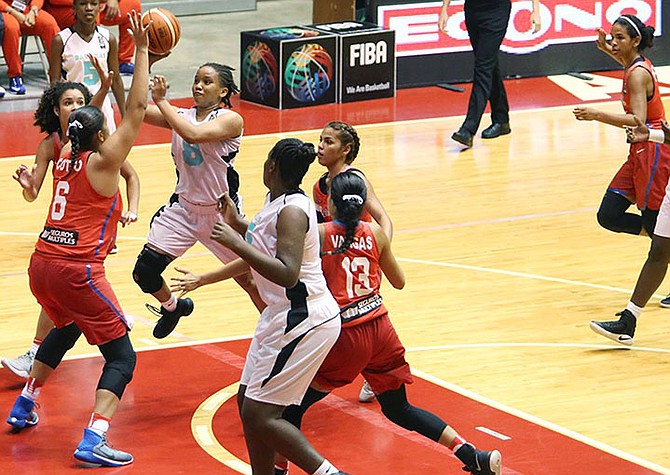 The Bahamas in action against Puerto Rico.

The Bahamas couldn’t stop the up-tempo game from host Puerto Rica and ended up getting blown out by 64 points in the FIBA U17 Centrobasket Championship for Women.

The only thing that the undefeated Puerto Ricans didn’t do in their near flawless feature game on day three of the championships on Thursday night was reach the 100 century mark in pulling of their 99-35 massacre over the Bahamas.

Puerto Rico used an impressive 21-9 first quarter to propel them to a 49-19 advantage at the half. They came out of the locker room and the Puerto Ricans out-scored the Bahamas 28-5 as they extended their comfortable lead to 77-24 spurt at the end of the final break.

In the fourth quarter, the Bahamas got some contribution of the bench, but it wasn’t enough as Puerto Rico cruised to a 22-11 margin to drop the Bahamas to 1-2 in the tournament after splitting their first two games, beating Suriname 86-69 the day before and losing 53-39 to Costa Rica on opening day.

Before fouling out in the third quarter, forward Valencia Demeritte ended up leading the Bahamas once again with just seven points. In the 19 minutes and 23 seconds she played, Demeritte shot 3-for-9 from the field and 1-for-2 from the free throw line.

Puerto Rico had seven players in double figures with Sheslanie Laureano scoring a game high 23 points with nine rebounds, five assists and as many steals.

The Bahamas was dominated in each statistical category, except for turnovers where they had a 37-20 advantage and the team committed 37 fouls, compared to just 20 by Puerto Rico.

Puerto Rico enjoyed its biggest margin by 70 points, while the Bahamas only had one lead and that was 3-2 at the start of the game, thanks to a 3-pointer from with the first 4:44 into the game in the first quarter.

The Bahamas didn’t get into 7:21 into the second quarter on a free throw from Bowleg. Demeritte, who had picked up three fouls in the first quarter, came back into the game and scored on a lay-up for a 45-15 deficit.

But on the next ply, she committed her fourth foul and had to go back on the bench.

Without Demeritte in the line-up, the Bahamas found it difficult to score, coming up with just five points in the period.

The Bahamas, coached by Varel Davis and assisted by Terrance ‘Red Eye’ McSweeney and Deven Johnson, will have to play a reclassification game today to determine the final position they will finish in.

When writing an article like this, please put the name of the sport in the title. I have no idea what sport was being played.