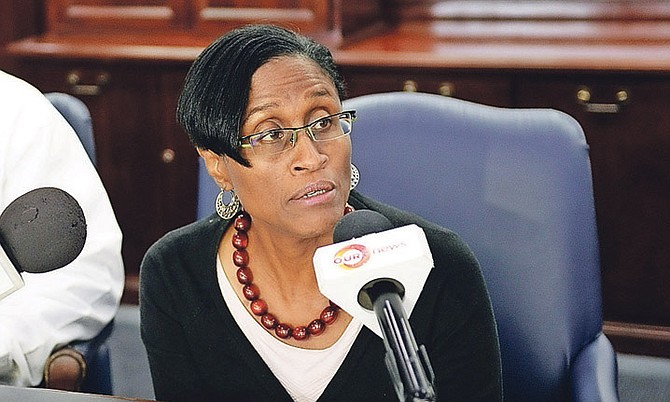 BAHAMAS Power & Light CEO Pamela Hill has been terminated, The Tribune has learned.

A high-ranking executive at the corporation confirmed that Mrs Hill was given notice of her termination with immediate effect.

The announcement comes less than a week after the company fired three junior employees in connection with a more than $2m fraud scheme uncovered earlier this year.

The scheme, which involved approximately 44 cheques paid out to 16 vendors from December 16, 2016, to May 9, 2017, prompted a wide-ranging audit by Ernst and Young of the electricity provider.

Hill was named chief executive officer in May, 2016.

PowerSecure’s five-year management services agreement, reportedly worth as much as $25m, was promoted by the former Christie administration as being the answer to sub-par electricity service and high electricity bills.

she had a good ride. nice salary, a mansion rented, hotel stay during hurricane, all she had to do was dress in expensive suits, high heels and talk crap,

talking crap, that is usually what these economists. accountants and other business types do. only works because they are well dressed.

if you get one of those science types in tie dye shirts and birkenstocks no one takes them seriously, but they know how to run places better.

100% agree. The brilliant technocrat in khakis gets very little respect. The semi-literate bullshitter in cuff links and a nice suit goes all the way to the top. Image is everything in this society.

With all due respect the CFO should've preceeded this termination or succeed it.

We need both peas out of that pod gone!!

Comrades! Say it aloud - Pamela Hill gone get her own self fired! One less work permit for Immigration Minister Brent to have deal with from boxes files on floor he office!
What a perfect opportunity for PM Minnis and his DPM/ Finance Minister "KP" to show some that 'much promised transparency.' Now make the transparency decision to tell the public what was the salary and perks package of the now fired BEC/BPL CEO - and the public treasury's left on the hook golden severance benefits parachute she walks away with? And, all this was done in the name of attempting to prove that the hiring of foreigners does knows best for the best interests Bahamaland's electricity?

We really need to terminate PowerSecure, the foriegn operators of BEC. What a waste of $5 million a year plus $1 million bonus plus $2 million in frauds. Both administrations just love foreigners and wouldn't give Bahamians a chance to buy BEC.

But none of us ever want any part of BPL/BEC to be owned or managed by Sir Snake or any enterprise in which he has a direct or indirect beneficial interest of any kind.

ABSOLUTELY. (Not sure Bahamians would WANT to buy BEC.) Would love to see BEC's Balance Sheet! (Or maybe not!)

who would buy BEC w/ 500 million in a debt and a worthless bunker C burning power plant ..The companies bidding were bidding to build own and operate a new plant and guarantee us a 28 cent kilowatt rate .PLP would never pull the trigger b/c that would cut out Snake and his bunker C fuel contract .

So Hill is gone and Basden, the man who took BEC from making millions, to losing millions is back. Will he be paid on top of his pension/severance deal? The board can't be serious. The CFO bears responsibility for the financial operations at BPL/BEC, and should be held accountable for the fraud that transpired under her watch.

This is that "noise in the market" the old folks used to warn us about. I suggest that you keep your eye on the "fuel surcharge" part of your bill since that is where the largest increase has appeared in recent months. Who got fired or who allegedly got what out of BPL is not going to help you pay that upcoming large BPL bill.

Who profits most as the fuel surcharge gets higher? BPL/BEC, the Public Treasury. Or is there some other player involved.

Foreign oil companies and their main local agent involved in supplying the fuel to BPL/BEC.

The government has a chance to get rid of Basden and the rest of the BPL/PowerSecure bunch who have compounded the problem ......... Revert to the old BEC model, remove all of the Out Island plants from BEC through privatization and solarization/windmills ...... then convert Clifton to a new LNG facility and get BEC back on track to profitability ........ Get rid of Snake oil monopoly

Since one does not know what BPL's goals and objectives are one cannot rate them. They never made their business plan public. You do know a lot of money was being stolen, the cost of electricity increasing for no apparent reason and almost two years in the power supply is still insufficient and unreliable. So you must question why was Power Secure brought in in the first place or the second? May as well have left things under the control of the Potcake. At least you would know when ya a$$ gone sweat.

Weird but this accomplished exactly what the PLP set BPL up for, "blame someone else". BEC's problems preceded Pam Hill. If the government had allowed the "plan" to be released, the public would have had a realistic view of what to expect. Pam got a golden parachute, we still suffering in the heat, nothing change for us but we "happy" someone get fired. The FNM is using the same tactic parading MPs to court for one day. Nothing change in the approach to governance, but we "happy".

This scam of cutting checks and sending them to a false company or a bank account in a fake name seems to be something new, if not very popular in the Bahamas. Need to get to the bottom of it and find out who is behind it. Many companies had to stop taking checks because persons were even counterfeiting managers' bank checks and presenting to places like Super Value and building supplies companies and scamming those businesses out of hundreds of thousands of dollars

As a Bahamian I love all this blame the foreigner crap, no wonder nobody wants to invest here with all this underlying hatred. Face facts the PLP practiced third world economics and spent spent and spent again whilst ignoring the maintenance and replacement of old and inefficient utilities. Christie was smart because if power and light had succeeded in making a go of the power situation he would (if re-elected) have taken the credit but if they failed then its back to blaming the foreigner. As a country we have had plenty of time to get our economy in order train people and run our own show but seem happy to accept cash donations and volunteer help when it suits us but put out this same old "blame the foreigner mantra" .Remember it is our own black Bahamians that have the power and freedom to make these choices.

OMG/This is Ours need to take your head out the shadows. If the foreigners were in charge of BPL when the money went missing then who is to blame. There are crooked and incompetent foreigners just like there are Bahamians. And many believe there was never a need to bring BPL/Power secure here in the first place. What single thing have they accomplished to justify their being here? If Bahamians are being fired and dragged before the courts and charged with corruption and stealing, then the least you can do with foreigners is fire dey a$$ and deport dey a$$. Tiefin is Teifin... To bad if you still boot licking.

Listen, I agree with you 100% on the need for BPL. The PLP, strategy was quite clear. From the story of Shane Gibson ordering a 1.4m bonus, the "plan" that was never publicized, (I'm sure they completed it, the government didn't release it, the GOVERNMENT didn't want a measuring stick applied), the rejected rate increase, the government never gave BPL the authority to "manage". So what were they there for? A clever ruse to shift public anger to someone other than "the government". And funny enough, it worked! People are overjoyed the boogeywoman "Pam Hill" is gone. Same old equipment, same lackluster employees, same visionless operation, but wooooy, she gone.

If your argument is correct and they were serious about anything, the first person to be fired would have been the CFO.

As I said before een nuttin change, find a scapegoat and carry on smartly.