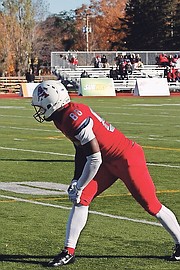 EUGENE McMinns is back at the top level of collegiate football in Canada and looks to make an immediate impact in his second stint with the Acadia Axemen.

McMinns was one of the bright spots for the Axemen in their 20-17 preseason loss to the Saint Mary's Huskies in Wolfville, Nova Scotia.

The 6'1", 190-pound wide receiver spent the 2015 season with the Axemen but left the programme the following year. In five games he finished with five catches for 101 yards and one touchdown. He had a breakout game with two catches for 48 yards and a touchdown against McGill. And he also led Acadia with three catches for 53 yards in his team's 27-0 win over Huskies.

"As a player I would as physically nothing has changed I am still an athletic and explosive wide receiver," he said.

"Mentally as a player I understand the game of football more and I can say I am more of a student of the game by watching film with a closer attention to detail in order to have a better edge on my opponent. Also understanding my role on every play and performing it to the coaches' design."

Axemen head coach Jeff Cummins told the team's athletic website that the effort was ahead of the pace for a first preseason game. "I thought they played well. We had enough mistakes in the game to create some teachable moments. We had some opportunities for big plays," he said.

The Axemen will face the Mount Allison Mounties in Sackville, New Brunswick at 2pm this Saturday in the Atlantic University Sport regular season opener.

Acadia is a member of Canadian Interuniversity Sport (CIS) and (AUS). They hold more conference and national championships than any other university in Atlantic Canada and has the highest number of Academic All-Canadians for primarily undergraduate universities in the country.

In their history, the Axemen have appeared in four Vanier Cup national championships, winning two of those in 1979 and in 1981.

In two years with the Hurricanes, McMinns developed into one of the team's top playmakers as they claimed back-to-back Atlantic Football League titles in 2013 and 2014.

McMinns was named the Holland College male Rookie of the Year as he finished with 21 receptions for 441 years and two touchdowns. He was also an impact player on special teams with 11 returns for 189 yards.

Following football season, McMinns' success continues on the track as a sprinter. He was named the Hurricanes' male athlete of the week after he won both the 60m (7.32s) and the 200m (24.01s) at the Atlantic Indoor Track and Field Championships.

He also won the 60 metre and 200 metre events at the Atlantic Indoor Track and Field Championships in Moncton, Canada.

In his second season, McMinns caught three touchdowns, but saw his season cut short when he was sidelined due to a head injury in the AFL semi-finals.