The Little Kitchen That Could 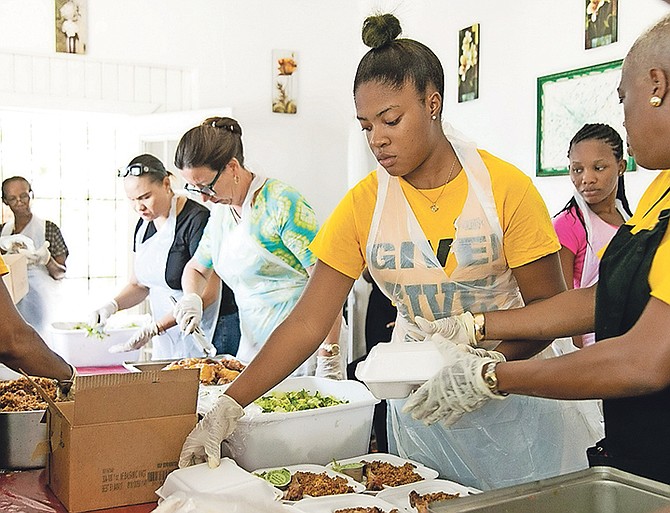 Bahamas Feeding Network board members such as Robin Symonette, centre, work alongside mother and daughter volunteers Alicia Pugh and Lisa Pugh to help plate and package up to 1500 meals every Sunday at Mosseff House, Fox Hill Road.

IN a world of fast-paced, high tech talk and expectations, a ritual plays out every week in a modest house in an even more modest neighbourhood that reminds us of what humanity is all about.

The building where it takes place is called Mosseff House. Donated by the Davis family who never forgot their humble beginnings in the Fox Hill community, the little yellow structure next to the Fox Hill Police Station comes alive every Thursday and Sunday preparing food for the hungry.

Volunteers clean, chop, marinate and cook over 500 pounds of chicken a week. They grate cabbage for coleslaw, stir massive pots of peas 'n rice, wash and tear enough lettuce to lay out a regulation football field.

And every movement, every stirring with a supersized spoon or plating and packaging in individual containers is accompanied by a smile and inspired by compassion.

"Hunger is a horrible thing to endure, but together we can wipe it out," said Philip Smith, who has been feeding the hungry for more than a decade, these days as executive director of the Bahamas Feeding Network. "What we see out there breaks your heart. Some of the people in the community who come to collect their meal may not eat another hot meal until the next time they come to the door which could be three or four days away. We are a rich nation and yet there are people hunting for scraps in dumpsters."

Founded in 2013, the Bahamas Feeding Network is the brainchild of its patron Frank Crothers, ambassador of the order of Rhodes & Malta. Since its launch, the network has provided hundreds of thousands of dollars in food coupons and supplies to help ease the pain of hunger. It has donated food or cooked meals for over 120 soup kitchens, churches with feeding programmes, children's homes and senior centres throughout the Bahamas. Its vans crisscross the island meeting up with church or feeding centre representatives or feeding centres, its packages are routinely shipped to Family Islands.

Nearly every major food retailer or wholesaler has gifted food or sold it at reduced prices for the cause.

Their donations are essential, said Mr Smith. "We could not do it without our sponsors."

But all the supplies, the 40-lb bags of chickens, the 50-lb sacks of rice, the hundredfold high stacks of Styrofoam containers would be inanimate promises of hope without the hands and hearts of volunteers like Skully and Solomon.

"Their dedication is unbelievable," said Mr Crothers. "I don't know how they do what they do and do it with such love."

Skully, short for Recina Ferguson, hauls hundreds of pounds of chicken. It may be 1am Saturday morning when she unlocks the door at Mosseff House to begin prepping for Sunday. While others are sound asleep, she is cleaning, chopping, seasoning. A retired teacher and tutor, she's been known to work 18 hours straight. And never a penny's pay.

"This is my heart," she said. On Sunday, her male counterpart, Solomon, a tall, wiry and fit man, hoists a huge steaming tub of peas 'n rice, running with the burning hot pan to replace the one that volunteers like Wendy Deveaux have just finished dishing out.

With as many as 30 volunteers, often buoyed by organisations like Rotary, Kiwanis and Rotaract that swell the numbers even higher, the cooking and preparation of containers can take as little as five hours or as much as nine. A week ago, people from the Fox Hill community collected 300 meals before the distribution with vans even began or church and feeding centre representatives showed up to collect the distribution trays.

"These meals are going to help people who largely fall below the poverty level which the government pegs at $11.74 a day. And the government's own statistics show that one in every seven to eight people falls into that category. When we cook, plate, package and donate meals to the hungry, everything is carefully accounted for but what we can never measure is the love that goes into each one," said Mr Smith. "You have to be there, to hear the singing, watch the camaraderie and feel the spirit. Then you will understand."

A small house with a very large mission.