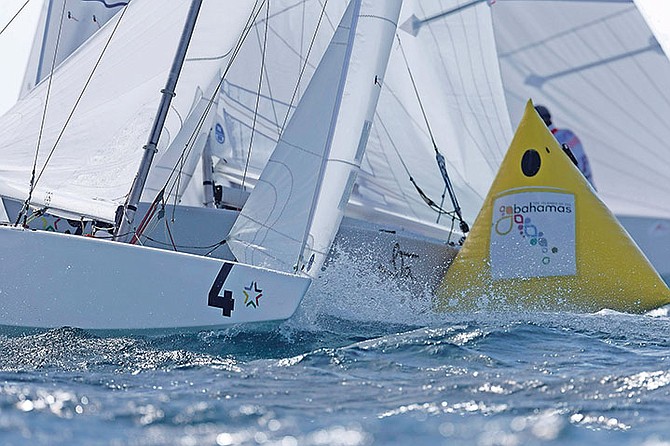 Racing at the fifth edition of the Star Sailors League Finals is all set to begin at 1pm today, just a few miles out from their base at Nassau Yacht Club in Montagu Bay.

For the fifth year in a row, some of the world's best sailors will line up to compete for the 2017 Star Sailors League title, the 4,000 Star Sailors League Ranking points and the biggest share of the US$ 200,000 prize pot, on the crystal blue waters of the Bahamas.

The entry list comprises 25 outstanding teams from 15 nations. Among them are nine of the top 10 skippers of the Star Sailors League Ranking and 16 VIPs picked from across the many different avenues of sailing. Twenty three Olympic medals have hung from the necks of the 2017 Star Sailors League finalists, of which seven are gold medals.

British Laser Olympic gold medalist Paul Goodison will race on the Star boat for the first time, after winning, twice in a row, the World Championship for the foiling Moth dinghy, the polar opposite of the one time Olympic doublehanded keelboat, designed in 1911.

Among the fiercest competition will be between the legends of the Star class including Robert Scheidt, Freddy Lööf, Mateusz Kusznierewicz, Hamish Pepper, Mark Mendelblatt, Eivind Melleby, Xavier Rohart and crewmen Bruno Prada, Frithjof Kleen, Pierre-Alexis Ponsot, Brian Fatih and Dominik Zycki - all of whom raced at the London 2012 Olympic Games.

Then there are the Grael brothers - Torben and Lars, plusPaul Cayard, Augie Diaz andGeorge Szabo, all sporting the Gold star on the mainsail as past Star World Champions, plus Diego Negri and Francesco Bruni, who have history fighting to represent Italy in the Star back in their Olympic sailing days.

All races will be streamed live every day from today to Saturday 9th on www.starsailors.com and on the Star Sailors League Facebook page.

Tune in for spectacular racing in some of the world's most spectacular waters and to participate in 'Watch The Finals', a photo contest where you take a picture of yourself watching the SSL Finals and share it on Instagram with #WatchTheFinals and tag @StarSailorsLeague.

The winner of this competition will receive SSL clothing signed by all the competitors.

On Thursday there will be a press conference to welcome journalists, both local and international, followed on Fridayby a special birthday party by the pool to celebrate Bahamian Star Olympic champion, Sir Durward Knowles, who turned 100 last month.

The Star Sailors League Final will end with a prize giving ceremonyon Saturdayand the closing Gala Dinner at Nassau Yacht Club in the evening.