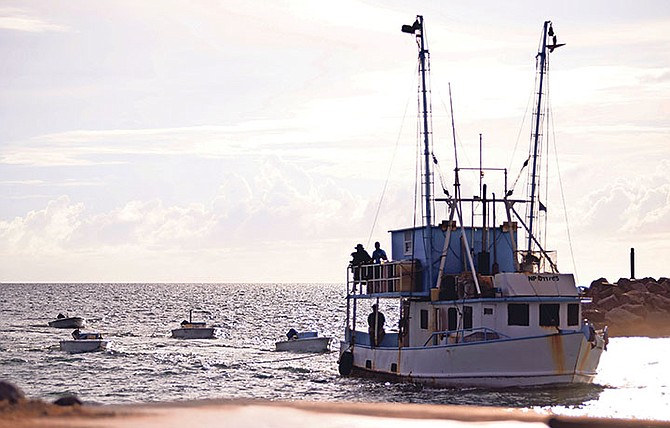 A RBDF file photo shows one of the apprehended vessels with skiffs in tow entering the RBDF Coral Harbour Base. Photo: RBDF Public Relations Section

TWO weeks after they were apprehended for fisheries violations by members of the Royal Bahamas Defence Force (RBDF), two Dominicans were charged in court.

Rialerky Lantigua and Yordi Andujar were charged with possession of prohibited apparatuses for fishing purposes, with dive compressors. Both men pled guilty and each were fined $2,000, according to the RBDF. Their bail was set and the matter was adjourned until February 7 or 8, 2018.

On November 23, a total of 45 fishermen aboard two Bahamian registered fishing vessels were apprehended approximately three miles east of Bimini. The vessels, were “SRJ” and “Black Bahamian.” The crew, consisting of 16 Bahamians, 23 Dominicans and six Haitian nationals, was taken into custody after being found in possession of illegal fishing apparatus, namely diving compressors. Also found on board the vessels were a large quantity of fisheries products. The vessels and crew were brought into the capital and turned over to the relevant authorities.

Magistrate Joanne Ferguson said she would also make a ruling whether the vessels would be released, as there were no charges against them and the captains.

About time we start protecting what is left of our rapidly diminished marine enviroment before there is literally nothing to protect.