Dame Anita Allen Pays Tribute To Family, Friends And Colleagues Ahead Of Retirement 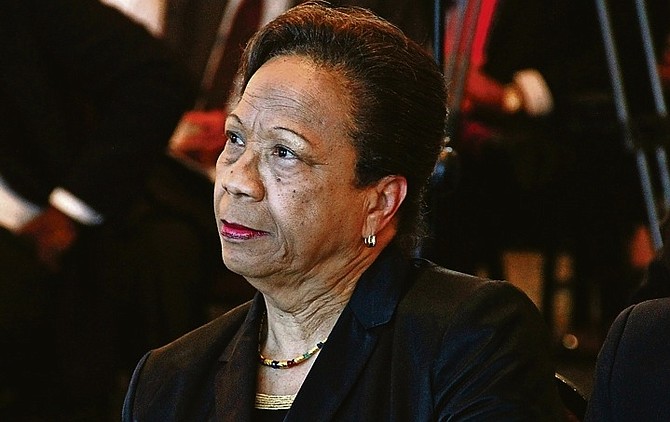 COURT of Appeal President Justice Dame Anita Allen will officially take leave from her post next Thursday, following a special sitting of the Court of Appeal to mark her retirement on Friday.

In her farewell address, Dame Anita recognised family, friends and colleagues who played critical roles in her success and achievements over her more than 40-years of service to the legal sector.

Highlighting the many judicial milestones which occurred during her tenure, Dame Anita noted the presence of her husband, retired politician Algernon Allen; her son, Attorney Algernon Allen Jr; and several of her contemporaries throughout the years including former Attorney General Allyson Maynard-Gibson, attorney Wayne Munroe, attorney Brian Moree, QC and those that served with her on the bench – Justices John Issacs, Stella Maureen Crane-Scott and Roy Jones.

To the latter she stated: "Thank you for your kind sentiments and let me again take this opportunity to publicly recognise and acknowledge a dedicated commitment and stellar service to the Court of Appeal."

She added: "And thank you for your personal support and encouragement of my leadership. Suffice to say, you have been my best critics, my most honest friends, my most reliable teammates and my most dependable colleagues."

As for the judiciary she is leaving behind, Dame Anita said, while she isn't interested in offering her views on the current state of laws, the judicial system or overall judicial administration; her commentary throughout the year and efforts to improve the system should be viewed as her parting assessment.

She asserted: "All I wish to do today is to pay tribute to the judiciary and to say that we are most fortunate to have in The Bahamas a judiciary that is independent and impartial. And one that commands the respect and confidence of the community."

Dame Anita became a Justice of the Supreme Court of The Bahamas in 1995 and was elevated to Senior Justice in 2005.

In 2007, Dame Anita served as Acting Chief Justice, later succeeding Justice Dame Joan Sawyer as President of the Court of Appeal in November of 2010.

In January, during the annual special sitting of the Court of Appeal, Dame Anita confirmed she was set to retire from the bench on December 21.

At that time, Dame Anita said the appellate court had much to be proud of for the work accomplished since her appointment with the help of colleagues and staff.

She attributed the court’s high level of performance to the work of registrars, judicial research counsel secretaries and staff at the court.

Chief Justice Sir Hartman Longley, also present for Friday's ceremony, is expected to be appointed the new President of the Court of Appeal.

That appointment will then vacate the post of Chief Justice, which is expected to be filled by Senior Justice Stephen Isaacs in an acting capacity, according to well-placed sources.

Sir Hartman had previously announced he and Justice Rhonda Bain were set to reach the mandatory retirement age in February and April this year respectively, adding the latter had made an application for an extension to continue as a judge of the Supreme Court.

A statement issued by Cabinet Office in February noted that in accordance with Article 96 (1) of the Constitution, Governor-General Dame Marguerite Pindling, acting on the recommendation of then-Prime Minister Perry Christie, after consultation with then-Leader of the Official Opposition Loretta Butler-Turner, extended Sir Hartman’s appointment.

However, that announcement made no mention of Justice Bain’s application at that time.

The epitome of how mediocrity has been allowed to rise to the top of the Legal Profession and indeed, a major contributor to the dire state of the Country today resulting from extremely poor Judicial Deciisons, just review any over the past few months for ample example of Judgments on Appeal (perhaps even "rushed" on account of pending retirement) now requiring still further redress at the Privy Council by Litigants simply in search of most basic "honest" justice, so far denied due to such Judical incompentnece, notwithstanding having already incurred literally years and years of delay at inordinate expense in pursuit of such basic Human Right, suffice it to say, Good Riddance!

Abolish the pensions and see how many step forward to serve the country! Start with the M.P.'s and Senators..........

Dame Anita is a good example of a Bahamian Woman who has worked hard and has done well. May the good Lord be with her all the days of her life.