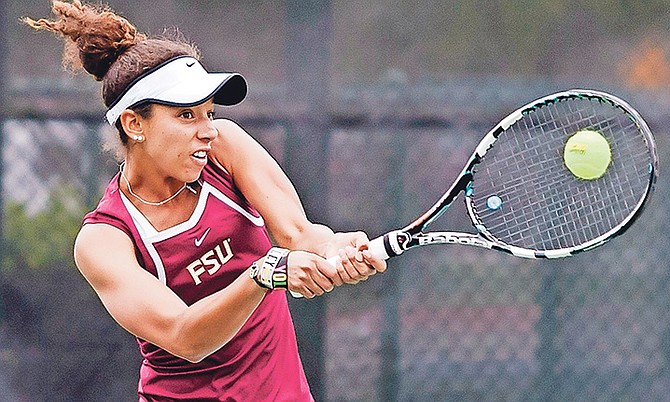 Top seeds Kerrie Cartwright and Baker Newman will be in action in the first set of matches played today at the National Tennis Centre as the Bahamas Lawn Tennis Association's Annual Giorgio Baldacci Open gets started.

Cartwright, one of 12 players entered in the ladies' draw, will begin play 9am this morning on the Stadium court against Donesha Gibson, while Newman, one of 19 men, will play the opening match at the same time on court one against Perry Newton Jr. Cartwright, the only female player with a WTA ranking, is back in the tournament after missing the past two years.

She is being joined by Grand Bahamian collegian Simone Pratt, the No.2 seed, who is also making her return from a brief hiatus. Collegian Danielle Thompson is seeded at number three and local junior player Sydney Clarke will occupy the No.4 spot. Missing will be collegian Iesha Shepherd.

The women will be playing for their spots on the Fed Cup team.

On the men's side, Baker and Spencer Newman will be back as the top two seeds respectively. Veteran Marvin Rolle will play out of the No.3 spot, Kevin Major Jr is No.4 and Philip Major Jr round out the top five.

At the end of the tournament, the BLTA will select the players who will be eligible to represent the country on the Davis Cup team.

The BLTA have divided the players into four pools for the women and five for the men. They are seeded based on their ATP/WTA, NCAA and national rankings respectively in singles.

The remaining players were drawn randomly to complete the pools. Each player will play each other in the round robin during the course of the week.

The first two finishers in each men and women pools will go into a knockout main draw with the eventual losing semi-finalist playing for third and place.

Second round losers in the main draw will then play for fifth through eighth places.

The players have been matched up in the following pools:

Today's matches are as follows: