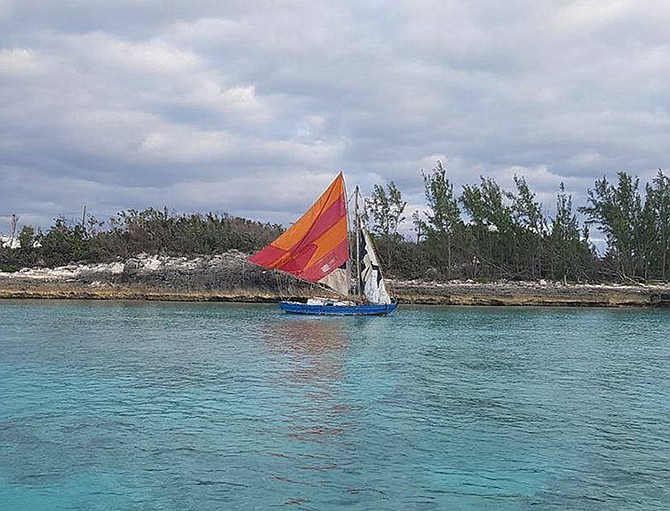 The sloop that landed near Clifton Pier earlier this month.

IMMIGRATION officials have received information that five Haitian sloops “are on the way” to the Bahamas, according to Kirklyn Neely, head of the Immigration Department’s Enforcement Unit.

In an interview with The Tribune, Mr Neely said after questioning several people, including the captain of the boat of migrants that landed near Clifton Pier last week, officials have “reliable information” that five more boats left Haiti last week bound for The Bahamas.

He also expressed concern that the captain of the most recent boat that landed in the capital has been deported “at least three times and keeps coming back.”

“We got information that these boats are all leaving from Haiti to come here,” Mr Neely said.

“They left en route to the Bahamas last week is the information we received, so all eyes are now on the lookout. We don’t know how big the boats are or how many persons were on board so that is why it is important to catch them out to sea.”

Last week, Mr Neely said officials are bracing themselves for an “influx of illegals,” as the holiday season “usually sees about three to four” Haitian sloops illegally land throughout the islands.

His comments came moments after a boat “loaded” with Haitian migrants landed near Clifton Pier last Monday about three miles from Coral Harbour.

It was the second time in a month an illegal sloop landed near the Royal Bahamas Defence Force’s (RBDF) Coral Harbour Base.

Immigration officers and other authorities spent the week combing the area for the migrants. The RBDF said 57 people - 43 men, 11 women and three children - were taken into custody and transported to the Carmichael Road Detention Centre.

Since then Mr Neely said they have picked up more migrants suspected to have been on board that boat, however he said, “no one is admitting anything.”

“We have picked up a lot of persons and as a matter of fact we are sending 114 back to Haiti on Tuesday. We got people with no documents that we believe came on that boat but they are not admitting to it. We also got the captain. He has been here at least three times but he is not prepared to write a statement saying anything and we can’t take them to court. There is something wrong with that.”

In November, a large empty sloop was discovered on the shoreline of Adelaide Beach. Despite extensive searches, immigration officials said no one from that boat was captured.

At the time, Immigration Director William Pratt said he “had no idea” how such a large sloop could land so close to the Royal Bahamas Defence Force’s base and go undetected, but suggested the RBDF should perhaps “improve their surveillance.”

Authorities believe the immigrants who landed at the time had help from people already on New Providence and warned anyone who was found to be hiding them would be jailed, fined or both.

Last month, Mr Neely estimated between 150 to 250 undocumented migrants were on board the sloop.

The hunt for the migrants began on November 12 when the RBDF said it was investigating reports of a wooden Haitian sloop landing in the southwest area of New Providence.

Last month, Minister of National Security Marvin Dames said the Bahamas is an archipelago of over 700 islands and cays, adding it is not possible to identify every vessel that comes through its borders.

“I can tell you from personal experience I’ve had many trips when I was in the police force running operations, you can go out for hours and not see anything, land, boats, or anything else. For someone to think that every vessel that comes through here should be identified, that’s not humanly possible,” Mr Dames said at the time.

I still don't understand why the defense force isn't using more aircraft. Drones are nice but still seem expensive and have a much higher crash rate. For the price they paid for just one of those bigger boats they could of gotten four or five aircraft. And not even regular aircraft but modified ones with actual zoomable surveillance cameras for day and night patrols instead of trying spot it with just their eyes which they seem to be doing now.

Aircraft is also expensive. It's easy to get a loan to purchase but noone finances the maintenance. I still advocate that the best solution is a hybrid system with a partial civilian force comprised of persons living in or near the coast, concealed cameras in sparsely populated areas and defence patrols. Details are deep, you'd have to complete surveillance training, get scheduling right, ensure anonymity and security of participants, don't want any collusion

Relatively speaking aircraft are not that expensive. Smaller aircraft like this http://www.diamond-air.at/en/special-...">http://www.diamond-air.at/en/special-... are possibly less than 2mil. Can't imagine the maintenance and crew costs are more than it is for one of those boats. The smallest ones of the new boats we just got cost over 10mil i believe. We need multiple layers to catch these illegal immigrants.

The captain of the illegal human smuggling boat has been here before at least 3 times which is shameful as we should have people ho figure out what iis going on and charge and jail him. Simple if you cant stop the illegal boats stop the captains. We should notwait for a bigger disaster to happen if a legitomate ship is to run over one of these packed slow wooden sloop at night and next morning The Bahamas is world news and we will never win that one.

Let the 9 RBDF ships meet them at the border (near Inagua) and open fire ...... the traffickers and the trafficked will get the message in Haiti and stop coming very soon .......... The solution is not difficult, just cold.

Like the idea of gunboat policy/diplomacy. After all these decades its worth a try.

So the Department of Immigration knows when the boats are coming......emmmm and the Defence force doesn't......interesting.

I think Dames is wrong. He's basing his statement on old methods. Not surprised given the last six months. Hybrid system

Why are we so kind as to send the boat captain back to Haiti so he can load up another sloop and do it all over again? Is he not a smuggler of, at least, humans? Why not send him to Fox Hill?

What we need to do is to publish many stories in Haiti about finding those five vessels overturned in the middle of the ocean or floating around without a captain, and all passengers dead or half eaten by sharks, bodies floating all over the ocean and up on shore. Stories of boat captains throwing the men overboard and raping the women, eating the kids etc. Then hopefully the Haitian people would lose faith in getting across safely, or will refuse to pay such a high price for such a perceived higher risk. In short, we need the Haitians to think that the journey is so horrific and risky that it is not worth it.

You are sick for real.

Comrades! Ballsy hey to send an advance communication to immigration's top brass officials that five Haitian sloops “are on the way” sailing towards the Bahamaland with a warning.... catch we if you can?

I do feel for the BDF (nothing Royal about them). It is difficult to spot a red and yellow sail on the horizon, going a full 3 knots, when you are pissed and smoking the latest seizure from Jamaica.

How you bring Jamaica into your mouth? Don't they grow weed in the sunny Bahamas?

It's a backhanded compliment. Your stuff is the best.

Sorry to disappoint. Most of us do not mess with the green stuff. Many do most dont

The captain who has been in charge with illegal trips bringing illegalmigrants to our shores should NOT be sent back to Haiti, but put in the hole (solitary confinement ) for a twenty year stretch. The vinegar of human kindness now runs through my veins and it feels so sweet!

That is torture. You need to check your soul if you have any.

He's probably an illegal as well and trying to protect his family and brothers in crime. Probably already got ran out of Canada for doing shit and claiming 'I's a Rasta dread!'.

Ok you psychopathic joker. Anyway, put it this way, you would be glad to be in my shoes. Your only asset is Bahamian citizenship, that isntotaly useless to me.. But I will defend justice. To hear you casually talk about killing pro souls who are seeking a better life.

It's only losers spend all day griping about foreigners doing menial work. Successful people who are doing stuff don't have time to waste.Remember you live on a set of islands that hardly raise 20 meters off sea level. Be humble, that same Haiti could be your refuge tommorow. Be humble people have to be fleeing these low lying islands in pacific because the sea is rising. Be humblem you gyys dont grow your own food. Be humble your best and brightest go to Florida and never return. Most of so, be decent and stop advocating atrocities and murder in the name of immigration enforcement.