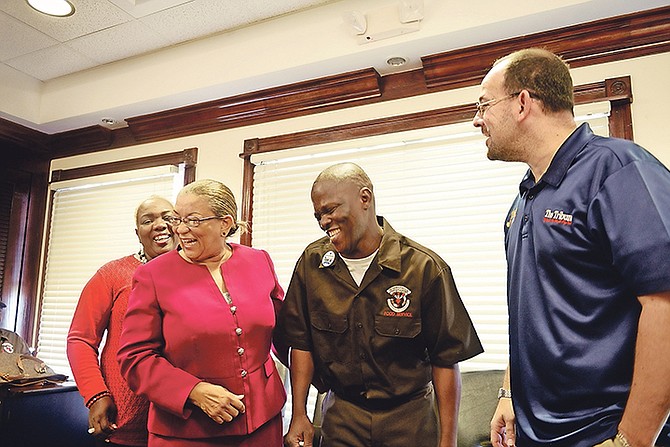 Mr Sweeting is senior porter in the Food Service Department at the Sandilands Rehabilitation Centre (SRC).

At a press conference held yesterday at PHA’s Third Terrace Corporate office, Mr Sweeting was celebrated for his years of hard work and dedication and especially his commitment to the SRC this past hurricane season.

Acting managing director of PHA Hannah Gray said: “Mr Sweeting’s planning, proactive approach and work ethic came to notice during the preparations for the hurricanes which threatened The Bahamas recently. He ensured that food ration boxes were placed throughout the institution, so that patients and staff could access food supplies even in the event that strong winds prevented food deliveries by the porters.

“Even during the storm, Kendal made sure that when he delivered hot meals to patients and the staff on duty, he did so with a cheerful disposition, in spite of the inclement weather. This so impressed his colleagues that his head of department and even the hospital administration department received calls complimenting his services during that stressful time.”

Of these accolades, Mr Sweeting humbly said, “I thank the Food Services Department, for everything they’ve done for me. I love doing my job.”

For this statement, those present at the press conference heralded him as, “A man of few words, but of deeds.”

The Unsung Heroes Award is the result of a partnership between the PHA, The Tribune Media Group, and the Aidan Carron Children’s Foundation. It is presented monthly to those who “go beyond the call of duty” in the field of public health.

Kevin Darville, The Tribune Media Group’s special projects manager, presented Mr Sweeting with a certificate of recognition, a cash prize of $1,000, a dinner voucher for two at the Dune restaurant at the One&Only Ocean Club and a commemorative pin.

Nomination forms and full criteria for eligibility and selection can be found on the PHA website (phabahamas.org) or submitted via email to or obtained from the Department of Human Resources. Nominations must be submitted by the last day of the month.

Excellent! These are the stories that need to be on the front pages in 2018. Put the pictures of criminals in the back.