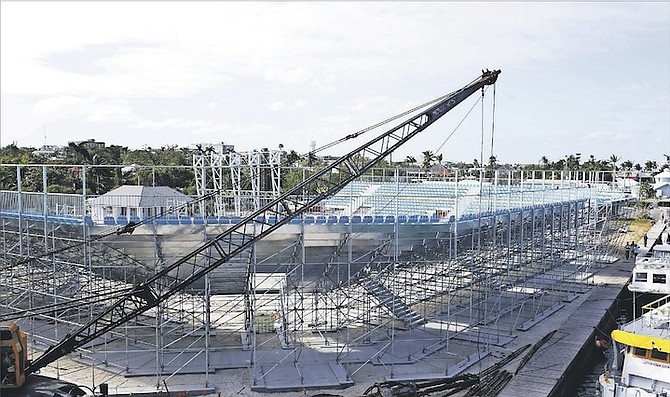 WITH the draw set and facilities nearing completion, the official schedule was released as the Bahamas learned more about their path to a Confederation of North, Central America and Caribbean Association Football (CONCACAF) Beach Soccer Championship title.

For the first three days of the tournament, the Bahamas will close out competition, headlining the 8pm feature game at the National Beach Soccer Facility, at the foot of the Sir Sidney Poitier Bridge.

The CONCACAF Beach Soccer Championships will be contested February 20-26 and the Bahamas was drawn in Group A along with Jamaica, Belize and Guyana.

On February 21 they will face Belize and will close out play in the group phase the following day with a matchup against Jamaica.

The USA will face Trinidad and Tobago in the 8pm feature on day four.

Play during the group phase will kickoff at 1:45pm with six games on the schedule and the final game beginning at 8pm.

The quarterfinals begin February 25, followed each subsequent day by the semi-finals and finals to conclude the week-long event.

In the playoff rounds, play will begin at 11:15am each day.

According to the latest Beach Soccer Worldwide rankings, the Bahamas is the top ranked team of their group within the region at No.6 in CONCACAF and No.55 worldwide.

Jamaica is ranked No.8 in CONCACAF (65th overall), Belize is No. 16 (92nd overall) while Guyana is presently unranked.

The tournament champion and the runner-up of the will join host Bahamas as the three CONCACAF representatives in the FIFA Beach Soccer World Cup 2017. If the Bahamas reaches the final, the World Cup spot will be allocated to the next best placed team.

In addition, the tournament will also serve as a test run for the upcoming Beach Soccer World Cup, April 27-May 7.

In an effort to further develop the sport, each one of the 16 participating member associations are guaranteed to play six games, with all competing for final tournament placement, until the last match date.

The Bahamas last hosted the CONCACAF Beach Soccer Championships in 2013 where they finished sixth following a loss to Guatemala in their tournament finale. “As The Bahamas prepares to be the first Caribbean country to host the FIFA Beach Soccer World Cup in 2017, we are pleased to organise the CONCACAF championship there as well,” said CONCACAF General Secretary Philippe Moggio. “Beach soccer holds a very special place in this nation as displayed when it hosted the Confederation’s qualifying tournament in 2013. We look forward to an exhilarating competition, while leveraging it as a powerful platform to strengthen the game within our region.”