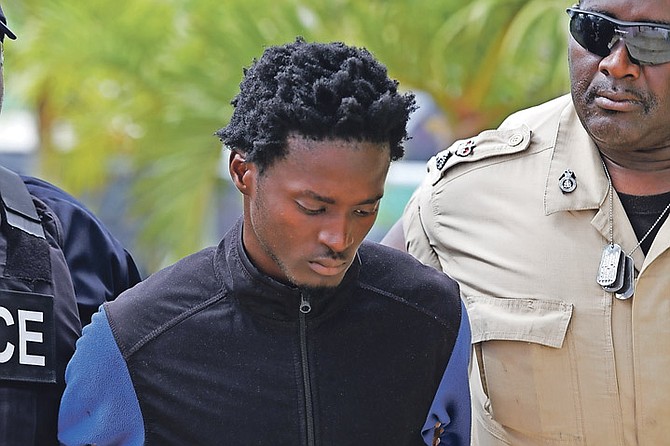 A MAN was remanded to prison on Friday after he was charged in connection with two recent fatal shootings in the capital.

Richard Charlton, 22, appeared in Magistrates Courts facing two counts of murder, and a count each of attempted murder and arson.

The murder charges were brought under section 291 (1) (b) of the Penal Code, which does not attract the discretionary death penalty if a conviction is reached at the end of trial.

It is first alleged that on January 22 he intentionally and unlawfully caused the death of Anthony Mather and then attempted to cause the death of Ashtain Gale on the same date.

It is also alleged that on January 11, he caused the death of Kevin Rolle.

Concerning the charge of arson, it is alleged that he and 20-year-old Delano Fawkes, being concerned together on January 18 with others, did intentionally and unlawfully cause the house of Lynda Joseph at Majors Alley to be set on fire.

Neither accused were allowed to enter a plea to their respective charges because the cases would be fast-tracked to the Supreme Court, where a formal arraignment would take place for each of them.

This would occur through service of a voluntary bill of indictment, scheduled for March 28 when they return to Magistrates Court.

They were remanded to the Department of Correctional Services in the interim. However, they were advised of their right to apply for bail to the Supreme Court.

Fawkes has retained attorney Lennox Coleby to defend him while Charlton was unrepresented in Friday's arraignment.