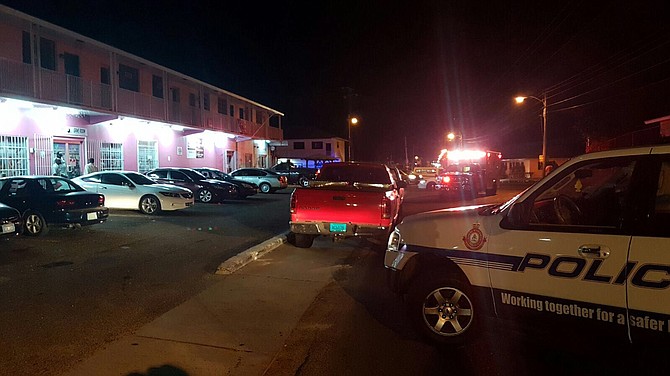 The scene of the shooting in St Vincent Road and Faith Avenue where a man was killed on Saturday night after a lone gunman opened fire on a group playing dominoes.

A SPATE of shootings in Nassau on Friday night and Saturday has left two men dead, five in hospital and police investigating five separate incidents.

On Saturday around 8.40pm, officers were called to the scene of the fatal shooting of a man at St Vincent Road and Faith Avenue near the Kryptonite restaurant and bar.

Chief Superintendent Clayton Fernander, officer in charge of the Central Detective Unit, said: "A group of young men were playing a game of dominoes at this business establishment ... when a lone gunman fired several shots at them. As a result an adult male was shot to the body and he died on the scene." He said police did not know the motive at this time.

Police reported the suspect sped off in a dark vehicle.

It was the second killing in 24 hours in the capital and pushed the country’s homicide count to 19 for the year, according to The Tribune’s records.

Then shortly after 10pm, a man was standing on Washington Street when a man with a handgun approached and shot him before fleeing on foot. The victim was transported to hospital where he is detained in stable condition. Police have launched an island wide hunt for suspects in these two cases.

In the first fatal first incident, shortly before 7.30pm on Friday, police reported that two men were sitting in a vehicle on Durham Street, off Mount Royal Avenue, when two men with handguns approached and shot them before fleeing on foot.

The two men were taken to hospital where one of them succumbed to his wounds. The other man remains in serious condition.

Shortly before midnight, a man was sitting in his Honda Civic on St Cecilia Street, Chippingham, when a man with a handgun approached and robbed him of cash and a gold chain, according to police reports. The gunman then took the victim’s car and shot him before speeding off. The victim was taken to hospital where his condition is listed as stable.

Police are also investigating a shooting incident on Coconut Grove Avenue shortly after 9am on Saturday.

According to reports, two men were shot to the body by two men in a champagne-coloured vehicle that sped off. The victims were taken to hospital where they remain in stable condition.

Police have also reported they have taken four illegal weapons off the streets of New Providence in separate incidents during the past 48 hours.

Shortly before 9am on Thursday, Drug Enforcement Unit officers, acting on information, went to a bushy area on Saki Street off Soldier Road, where they uncovered a 9mm pistol with two rounds of ammunition.

A short while later, a concerned citizen handed over to police an AK–47 assault rifle with 21 live rounds of ammunition.

Around 4pm, Selective Enforcement Team officers were on routine patrol on Fowler Street, off East Street, when a man walking aroused their suspicion. On seeing the officers he threw a firearm to the ground and fled on foot. The officers gave chase but were unable to catch the man. The firearm was recovered and found to be a .40 Austria Pistol with 11 rounds of ammunition.

Shortly before 9am on Friday, Firearms Tracing and Investigation Unit officers, acting on information, went to Bailey Drive, Coral Harbour, where they uncovered a 12 gauge shotgun.

No one was taken into custody in connection with these seizures. 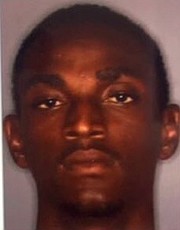 On Saturday police released a wanted poster for 27-year-old Shawn Brown, aka Fire, of Rupert Dean Lane for conspiracy to commit murder. He is described as between 5ft 8in and 5ft 11in, of dark brown complexion and slim build. Anyone with information on his wheareabouts is asked to contact the Central Detective Unit at 502 9991 or 502 9992.

A major contributor to crime in a society is poverty, lack of opportunity and lack of jobs.

How are these people supposed to provide for themselves & their families? Should we expect them to live outdoors and slowly starve to death?

Successive governments TOTALLY FAILED our people with no vocational training, D average academic qualifications and no remedial education. The result is what we have today.

"PLP All The Way"

Quite right but do these soulless murderers WANT jobs?

"Typical PLP Apologist Response, Government Takes No Responsibility For Anything"

Give the dam "family unit" education, opportunity and jobs an they won't have need for crime!

PLP ALL THE WAY - TO NOWHERE

Your attempt to link violent crime with unemployment is silly. This was a murder not a robbery; you do know the difference right? Blaming the government for bad parenting and a society that is naturally violent is the pinnacle of stupidity. I know you probably never travelled outside of the Bahamas but if you did, you would see there are many places where poverty does not mean violence. This is a cultural societal problem of which you and your ignorant point of view are a part.

Parents who can't make a living to properly raise their children, or where they must hold down two or three jobs to try make basic ends meet, leaving them working nearly 24/7, is a fundamental problem caused by the failed economic policies of the corrupt Crooked Christie-led PLP government. These parents are too busy working to survive and therefore have little spare time if any to devote to the proper rearing of their children. As a consequence of government's failed economic policies and resulting high unemployment or very low paying jobs, these children grow up without a good value system instilled by their parents. While growing up these children are also short changed by a D - education from our government's failed public education system leaving them with few job opportunities other than the most low paying ones. It is because of our government's failed social and economic policies that these children are all too easily prone to becoming robbers or murderous thugs in their early teen and adult years. For you to suggest government and unemployment are not the problem only proves even the more educated among us can sometimes, albeit much less often, be ignorant.

To not recognize the link is silly. No, just because you're unemployed doesn't mean you'll go out and murder someone, but the spikes in single motherhood, illegal immigration, corruption, illiteracy, unemployment, drug use, teenage pregnancy, youth violence and murder are ALL related. They are all symptoms of a society without ANY guidance or direction. And our leaders are to blame. Every cabinet minister over the past five years should hang their head in shame, they have allowed this country to fester while they focused their full attention on enriching themselves. Halkitis is the chief culprit, he signed off on the cheques.

This unsubstantiated superiority complex caused you dumb ass "supposed elites" to lose the equality referendum 4 to 1 and will similarly cause you to lose the fast approaching general election by even larger margins!

Parents are not responsible for curriculum and do not promote failing students to higher grades, YOUR GOVERNMENT is undeniably, totally responsible for FAILING to educate our people and growing the economy commensurate with population growth.

Despite the "travel", exposure and studying abroad, you and your PLP gods love boasting of, not one of you had sense enough to implement vocational training at junior high level, even though every country in the world you've "traveled" to have done so for decades.

You might have well have "traveled" to Alfred Jackass Gray's caves because obviously all you've accomplished is a collection of big photo albums. Certainly, you learned nothing of value for the country.

Bring on the election and don't forget to stock up on LOTS of Pampers too!

Comrades! Reducing the risks to lead poisoning among the population is no quick solution but one of the the most effective and low-cost ways to reduce crime over the long-term.
The second breeding ground for crime is to stop cutting out segments of the population from sharing in the nation's economy.
Then we also have to empty our overcrowded prison cells down to only one inmate per cell if we are to stop using Fox Hill Prison as the chief recruiting platform for new gang members.
No Judge should be allowed to jail anyone to an overcrowded six-mans per hell-hole of a cell.

True dat about not having segments of society participating in the economy. It all started with that PLP azzwipe Loftus Roker who singlehandedly with Swindling's blessing, destroyed education in the Bahamas.

Comrade Banker, don't you think it was the PLP's Basil Nichols, who played more of a major role to tricking the British school teachers into voting PLP - not Minister Loftus?

Single parent households have been dominant household form on the Bahamas since king hatchet was a hammer. Something else is going on here.

Comrades! Maybe someone has but as far as I know - single mothers have been blamed for everything except hurricanes - if they tried it wouldn't be hard to deny considering they're a proven act mother nature.
Forty-two percent all children in Bahamaland, were born to single mothers - yet we can only trace robberies, assaults and killings shootings to a handful of but a hundred, mostly males. Are you aware that there is evidence of the lack Trojan use by we males dating back to when Christopher Columbus landed on our island. No damn wonder we got so much sexual encounters diseases. Has be cautious where you poke and who you let's poke you.

And in 2010, a survey funded by the Clinton Foundation showed 75% of Bahamian households were single parents -- single mothers.

Comrade Banker, I'll tell you what we should all find sickeningly shocking and that is the number of grown man's (lots them married with their own still child-age daughters and who are high up and well known in society, business, church and social circles) - who be chasing after to impregnate girl children as young as ages 10-14 years.

Erry time new policeman arrives in Family Islands, there is a baby boom.

Besides this story is wrong. Two fellas were shot in the Grove but they are not recovering in hospital- one as dead as could be.

There is a thing call personal responsibility. I grew up with all of the maladies mentioned above and today I am a contributing member of society. It burns down to simply knowing what is right and what is wrong and the decisions that follows. If we buy all the excuses above then it feeds the narrative that "it is not their fault".So we do away with the death penalty and then later prison sentences. Don't get me wrong, I believe a strong family unit, education and jobs help but personal responsibility trumps them all.