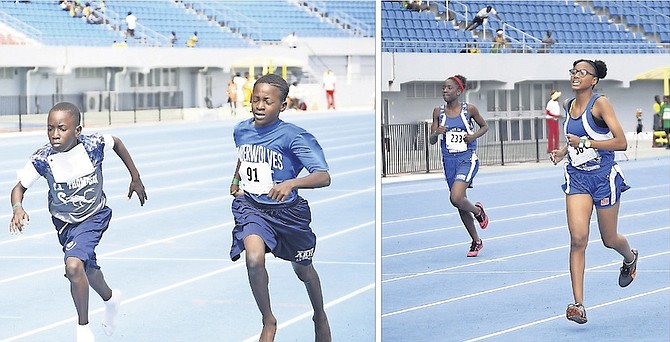 IF the CH Reeves Raptors are to claim a ninth consecutive GSSSA Junior High Schools track and field title, they face a much tougher challenge this year from the AF Adderley Tigers who trail just 1.5 points behind atop the leaderboard.

The two schools are setting the pace for a far different race from the lopsided finish in 2016.

The Raptors totalled 259.50 points ahead of the Tigers who posted 258. The HO Nash Lions are nearly 100 points behind in third place with a score of 159, followed closely by the SC McPherson Sharks with 107 and the DW Davis Royals round out the top five at 107 points.

Both teams hold decisive leads in combined team scores in respective age groups. The Raptors lead the Under-16 group with 125 points, 30 points ahead of the Lions with 95. The Tigers are just 11 points behind with 84 points. The Tigers lead the U-16 division with 174 points. The Raptors trail in second place with 134.50 and the Sharks are third with just 77.50 points.

The schedule was highlighted on the track by the 100m, 400m, 1500m and 4x100m relay in all divisions while field events included high jump, triple jump, discus and shot put in specific divisions.

Topping the list of individual performers on day one were several Raptors team members who were able to pull off double victories.

There was the dynamic duo of Jamal Flowers and Ahmad Evans in the U-14 boys’ division.

The roles were reversed in the 400m where they ran identical times of 57.33 but Evans edged out Flowers at the line to finish first.

Latrell Forbes of AF Adderley accomplished the same feat in the U-16 boys, leaping to first place in the long jump at 5.56m and a first place run of 56.93 in the 400m.

Also in the field, Lukadanyel Rolle of the TA Thompson Scorpions was able to win first place in a pair of events. He threw 36.87m to win the U-16 boys’ javelin and also cleared 1.70m to win the high jump.

The Raptors won three of the four divisions in the 100m final.

In the field, the Golden Eagles’ Colin Palmer won the U-16 boys’ discus with a throw of 31.66m while the Tigers’ Miracle Newton took the U-14 girls’ shot put with her throw of 8.09m.

Merrisa Chaute of DW Davis took the U-14 girls’ long jump at 4.06m while Zaria Major of AF Adderley took the U-16 girls high jump with a clearance of 1.44m.

Benet Johnson of Government High tossed the U-18 girls’ discus 25.65m for first while Johnie Jean-Jacques took first in the U-20 boys shot put with his throw of 14.55m.

After the first day of the two-day championships last year, the Raptors soared out in front of the eight-team field with a total of 305.50 points, with the Tigers behind at 186.50 and the HO Nash Lions third with 140.

They eventually went on to win their eighth title, currently the longest streak in high school sports in the country.

The meet continues 9:15am today at the stadium.