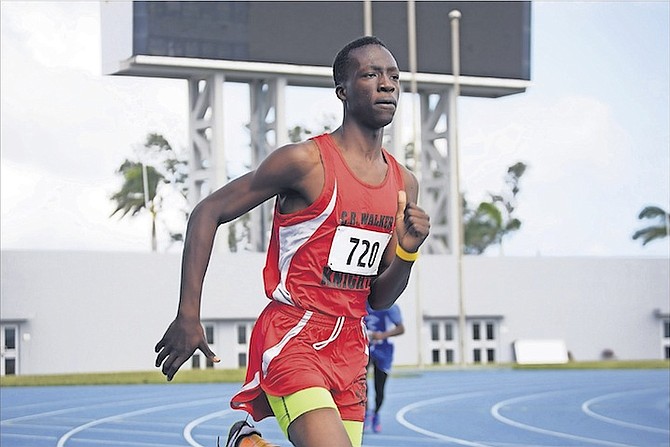 Recent editions of the GSSSA Senior High Schools track and field meet have featured thrilling finishes, adding to the budding rivalry between the CR Walker Knights and the CV Bethel Stingrays.

This year, the Knights have taken a commanding lead on day one, while the CI Gibson Rattlers look to pose a challenge once again in second place and the Stingrays follow at a distant third at the completion of day one.

The Knights totalled 243 points - 41 points ahead of the Rattlers who posted 202. The Stingrays scored 180, followed by the CC Sweeting Cobras with 102 and the RM Bailey Pacers round out the top five at 98.33 points. The remainder of the field includes the Doris Johnson Mystic Marlins (89.67), Anatol Rodgers Timberwolves (51) and Government High School Magic (49).

The Knights’ commanding lead in the Under-20 division was the catalyst behind the early lead, accounting for 141 points.

The Rattlers were second in the division at just 97. The Stingrays have a slight lead in the closely contested U-18 division with 112 points, followed by the Rattlers at 105 and the Knights at 102.

The schedule was highlighted on the track by the 100m, 400m, 1,500m and 4x100m relay in all divisions while field events included high jump, triple jump, discus and shot put in specific divisions.

Topping the list of individual performers on day one was the Cobras’ Denvaughn Whymms in the U-18 boys’ division.

The Knights won three of the four divisions in the 400m final.

In the field, the Knights’ Janae Thelamour won the U-18 girls’ javelin with a throw of 29.72m while the Rattlers’ Patrick Johnson took the boys’ event with his throw of 49.90m.

Ronald Ferguson of CV Bethel took the U-18 boys’ triple jump at 13.44m while his teammate Aldonique Rolle took the U-18 girls’ high jump with a clearance of 1.37m.

Benet Johnson of Government High tossed the U-18 girls’ discus 25.65m for first while Johnie Jean-Jacques took first in the U-20 boys’ shot put with his throw of 14.55m.

On day one of the meet last year, The Knights led the eight-team field with 304.50 points with the Rattlers accumulating 257.50 the Stingrays, 238.50. They went on to win the title in their first year under head coach Ednal Rolle, who replaced longtime Knights coach Floyd Armbrister.

The meet continues 9:15am this morning at the Thomas A Robinson National Stadium.