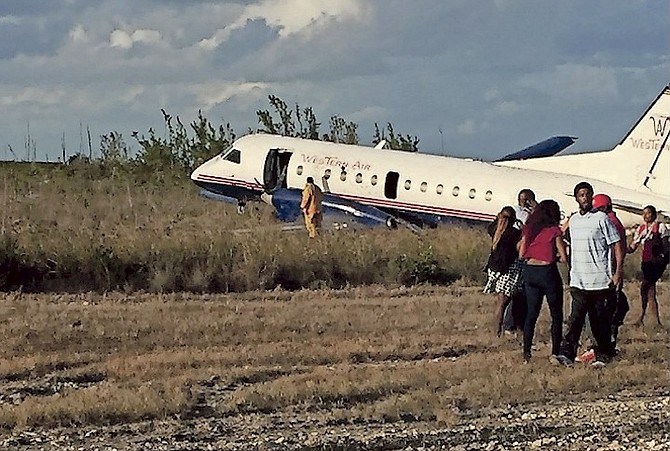 The scene on Tuesday after a Western Air plane crash landed at Grand Bahama International Airport.

INVESTIGATIONS are underway into separate incidents involving two Western Air aircraft that experienced problems while in flight on Tuesday.

Civil Aviation authorities were at the Western Air hangar in Freeport yesterday, inspecting the aircraft and speaking with the pilots, mechanics and airline officials.

Western Air has a fleet of five 33-seater SAAB 340 planes. Sherrexcia Rolle, vice president of operations and general counsel at Western Air, said that their operations have not been affected as three aircraft are still in service.

Ms Rolle said that reports of a crash landing at Grand Bahama International Airport (GBIA) on Tuesday were inaccurate. “The pilot landed the aircraft and was proceeding as normal with both landing gears down. The left (landing) gear malfunctioned and caused the aircraft to make an abrupt swerve on the side of the runway,” she explained.

According to reports, the incident happened around 5pm, just after the plane had taken off from GBIA on its way to Nassau, with 33 passengers and three crew onboard. It was reported that the aircraft experienced technical challenges and was forced to make an emergency landing. It skidded off the runway some 200 feet into the bushes.

Ms Rolle said that the aircraft had flown from Nassau to Bimini flawlessly, and from Bimini to Freeport. “It had taken off from Freeport when, three or four minutes into the flight, the pilot noticed some indication of an issue with his electrical system, so he communicated with Air Traffic Control and followed their instructions to fly around the tower to confirm that the gears were down,” she said.

“And he made a precautionary decision to return to the airport. He actually landed the aircraft and they proceeded to go down the runway and was making that first turn when the left gear seemed to malfunction,” she said.

Earlier that day, Ms Rolle said another pilot had made the decision to shut down one of the engines after noticing an issue with the oil pressure during a flight from Freeport to Nassau with 20 passengers and three crew onboard. “Basically, the captain shut it down. But the SAAB 340 can fly with one engine, and so the decision the pilot made was the right one,” she said. Ms Rolle said the aircraft continued in flight and landed safely at its destination.

She said that Western Air are also conducting their own internal investigations into the incidents, in addition to the independent investigations that are being conducted by Civil Aviation. “The people we have working on the aircraft are very experienced in the region and have been working with SAAB 340 for 20 and 25 years.”

Ms Rolle said Western Air has been working collectively with Civil Aviation and all officials to understand exactly what happened. “More than anything, we want the public to know that we remain committed to providing safe and reliable service. We put a lot of work into our maintenance programme and they are thorough with scheduled and non-scheduled maintenance.

“It was one of those situations where there was no indication of any issue and … we are continuing to investigate. But service is continuing as usual and our operations are not affected,” she said.

Saab 340's have one of the best safety records of any turboprop aircraft.

Perhaps Western should move its aircraft maintenance to is hanger in Freeport. Some have questioned the less viable maintenance base in Andros.