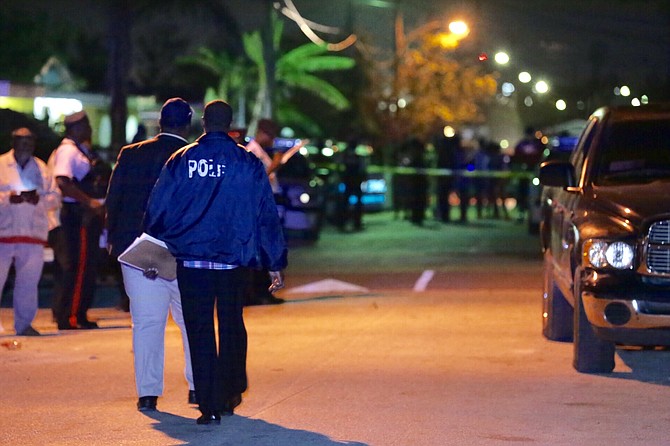 POLICE are investigating the fatal shooting of a man after an altercation outside a West Bay Street night club early on Monday. The killing took the murder toll of a bloody weekend in Nassau to seven.

According to police reports, the man was shot just after 2am during an altercation and transported to hospital. He died around 8am. Police said they have a suspect in custody assisting them with their investigation.

There have been 13 homicides in 13 days in February and the weekend murders take the toll for the country for 2017 to 27, according to The Tribune’s records.

Despite the bloody weekend, Assistant Commissioner of Police Stephen Dean said “hundreds” of police officers were patrolling the streets over the past few days in an effort to keep the public as well as visitors safe.

Meanwhile officer-in-charge of the Central Detective Unit, Chief Superintendent Clayton Fernander implored parents after a killing on Friday to “keep a watchful eye” on their children, especially their young boys.

Chief Supt Fernander said police have launched a massive manhunt for the suspects in the weekend killings.

With regards to the sixth shooting death, Assistant Commissioner of Police Stephen Dean said that, shortly after 8pm on Sunday in Yellow Elder Gardens, a man was sitting in the front of his home on Derby Road with two other persons when the suspects with handguns came and shot him. They fled on foot.

“All of our officers are out on the road and streets tonight trying to find these killers,” ACP Dean said. “This is not the only incident we are investigating. We are investigating several incidents over the weekend and we want to bring these persons to justice.”

The fifth shooting of the weekend took place at about 11pm on Saturday, also in Yellow Elder Gardens. According to police reports, the victim was standing outside his home on Graham Drive when the occupants of a white Nissan vehicle pulled up and shot him multiple times before speeding off.

The victim was pronounced dead on the scene.

An hour earlier, around 10pm, police were called to the scene of a shooting at a party on Deans Street.

Police say a group of persons were attending a celebration when the occupants of a blue self-drive vehicle pulled up and fired several shots into the crowd before speeding off.

Two men were shot and taken to hospital by ambulance. One man died shortly after arrival and the other victim is listed in critical condition.

Earlier on Saturday around 12.30am, officers responded to another shooting incident at a party this time in the East Street area.

According to police, a group of persons were at a nightclub off Lewis Street, when an argument broke out that led to a man armed with a handgun firing several shots into the crowd.

One man was shot as he attempted to leave in his vehicle; he was pronounced dead at the scene. Another man was taken to hospital where he later died of his injuries.

The final shooting incident took place shortly after 7.30pm on Friday. Police said the 15-year-old victim was walking across Dale Park in Peardale when he was approached and shot by a gunman, who fled on foot.

Chief Supt Fernander said the teen was “well-known” to the police and “was in and out of custody for questioning on a number of serious matters”.

Chief Supt Fernander said officers did not know the motive for the shooting, however he said police believe the victim was targeted.

He also said police were not ruling out a connection to the murder of 23-year-old Benjamin Anderson, of nearby Ida Street, who was described by police as a “prolific offender”.

Anderson was shot multiple times and killed while standing in front of his home on Tuesday, February 7.

Chief Supt Fernander asked parents to keep a closer eye on their children.

In an interview with The Tribune, ACP Dean said police are “doing an excellent job” arresting persons who have committed serious crimes, however he said crime is not just “a police problem”.

“We have five persons going before the court tomorrow (Monday) for murder and other serious offences. We have also arrested a lot of persons in relation to firearms and firearm smuggling. We continue to do good work, despite what is happening, we are doing our job everyday but if we depend on just the police, crime will not go down. Everyone must do their job, come to the police with the information and help us get these persons off the streets.”

Twelve murders in twelve days! This has to be a record. A very dangerous precedent.

This police officer in the photos, jacket couldn't be more professional!

Come on he should not be allowed to wear that jacket around. This is the level most Bahamians accept. Pure slackness. The criminals look at these guys as jokes.

You worried about a jacket? You need to worry about these animals on the street killing people day in and day out.

must likely he watchn that officer butt !lol, leave the officers alone

They need to update this story again to "8th man"

...Surely The PLP Will Be Erecting Signage About The Murder Count Under Their Watch...

Any idea when the promised "day one" crime solution will kick in?

"PLP All The Way" To Nowhere!

Also, any minute now the criminals should realize our "National Security Minister is armed".

lol I don't even remember the PLP giving a plan to fight crime.. These politicians are all fake man. Get out of the country while you can.

Comrades! Our complacency to each new murderous headline reminds me of how members of a church watched an known be verbal and boisterously loud little boy being hurriedly carried out, slung under his irate daddy's arm. No one in the congregation so much as raised an eyebrow - until the child yelled out.... "I beg ya'll pray for me now!

This is not a Bahamian crime problem ......... this is a Nassau ghetto problem

The majority of these murders are being committed in a three by five mile area in the inner city of Nassau ........... where is the Urban Renewal Rhodes scholar consultant that Perry brought back from overseas (who had all of the answers during UR1.0?????

Are all these killings related to the approaching planet 'x' or Niribu planet that is approaching our solar system and will be so close in September it can be seen with the naked eye. It is expected to eclipse r the sun in October and will have great magnetic effect on the earth. Is it the red dragon that is spoken about in Revelations 12. Signs and wonders of the last days. Violence will fill the earth.https://en.wikipedia.org/wiki/Nibiru_...">https://en.wikipedia.org/wiki/Nibiru_...

Too bad this isn't a funny story...

Seven separate murders in a single weekend on an island 21 miles by 7 and neither the Prime Minister nor the Minister for National Security have anything to say on the matter?????

Revelations 12..verses 1-6 read weep if you lost rejoice if you saved

Police in that country seem to be overwhelmed with the unprecedented violence. HORRIFIC!

MUST that country RETURN to the CROWN? Some stringent INTERVENTION is NEEDED ASAP!

Crime is hurting the Bahamas growth in tourism more than anything else. When a family hears of the crime even one time, they never forget it. Yes, Cuba is now out of the picture as a vacation spot for Americans. Believe me, they won't go. I have heard people say why not just go to Florida, it's safer for families. I know the last cruise ship came in on warned the passengers of the crime in Nassau, even on the port. They told the passengers to leave their valuables and their money on the ship. The passengers have already paid for their excursions, so they don't bring money off the ship with them. Therefore not having money for the shops. It's not good at all for the economy of the island. Some didn't even leave the ship. When we disembarked in Grand Bahama they didn't give any warnings.