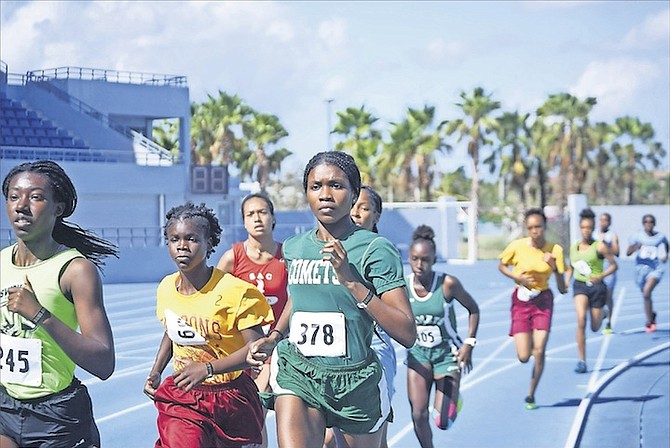 LEADER OF THE PACK: Athletes compete yesterday on day one of the BAISS Track and Field Championships at the Thomas A Robinson National Stadium.

Eleven new meet records were set, and the two-team race for the 2017 Bahamas Association of Independent Secondary Schools Track and Field title has already developed atop the standings following day one.

The two-time defending champions Queen’s College Comets streaked ahead of the field and set the pace with an already dominant performance.

The familiar foes have quickly emerged as the lone contenders yet again for this year’s title as the St Anne’s Blue Waves stand in third with 132 points, the St John’s College Giants are fourth with 96 points while the Nassau Christian Academy Crusaders round out the top five with 91 points.

In addition to the new meet records set on day one, six athletes surpassed the CARIFTA qualifying standards.

In the U-18 girls’ event, the top three finishers - Wendira Moss of St John’s (54.94), Marrisa White of SAC (56.62) and Tyler Gray of St Anne’s (56.88) all surpassed the previous record in the division and the aforementioned CARIFTA standard.

The middle distance events also produced a new meet record in the U-14 girls’ 1,200m with first place going to the Comets’ Devin Cuffy-Bethel in 4:04.49.

Several records also fell in the field. The Comets’ Shaunece Miller set a new mark of 1.45m in the U-14 girls’ high jump while Jordan Lewis of Temple Christian set a new mark in the U-18 boys’ discus with his throw of 42.04 metres.

Full results can be found at www.tekresults.net

The Comets are currently ahead of last year’s pace when they posted 462 points on day one – 28 points ahead of the Big Red Machine who scored 434. They went on to lead the duration of the meet and win with a total of 1,477 points while SAC was second with 1365.