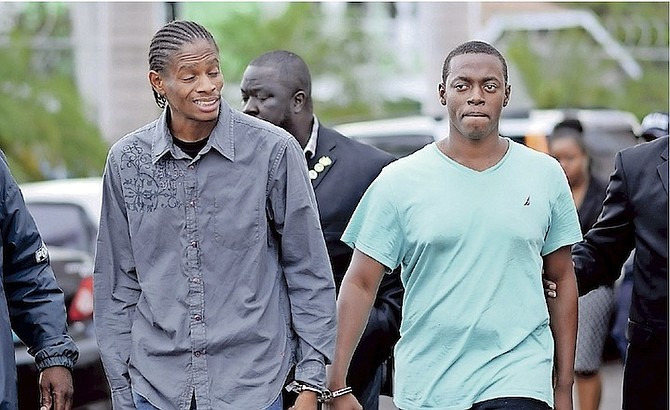 A MAN was handed a six-year sentence yesterday for trafficking more than 700 rounds of assorted ammunition into the country.

Jawaddi Woodside, 24 of Miami, Florida returned before Chief Magistrate Joyann Ferguson-Pratt less than 24 hours after he was arraigned on 11 ammunition related offences concerning a seizure by police on February 10.

It was alleged that, alongside Kendrick Woodside, 29, and Shequella Williams, 22, he conspired to import, and were allegedly found with, 50 rounds of .45 ammunition and 596 rounds of 9mm ammunition.

The American and Williams were furthered accused of conspiring to import two rounds of live 9mm ammunition, 50 rounds of .40 ammunition and 25 rounds of .380 ammunition during the same period.

The 24-year-old accused on Tuesday afternoon pleaded guilty to all of the charges against him while Williams and the elder Woodside denied any involvement in the alleged crimes.

Police prosecutor Sgt Timothy Saunders had said it was the intention of the prosecution to proceed with trial against the 22 and 29-year-old accused.

When the matter was called yesterday, the chief magistrate was given a summary of the facts from the police prosecutor.

Around 5.55pm on the day in question, a team of police officers went to the Golden Gates Shopping Centre having received a tip from the Department of Homeland Security in Florida on a shipment of ammunition that was being transported to The Bahamas.

The officers observed Jawaddi Woodside exit the Xpress-It shipping company with a speaker box, which he had placed into a Nissan Marche vehicle occupied by a female and another male.

When the 24-year-old got into the vehicle, officers immediately swarmed it and informed the occupants that they were suspected of being in possession of a quantity of ammunition.

After being cautioned and arrested, he was taken to a home in Nassau Village, where a search of a bedroom uncovered two bags in a pink backpack containing 77 rounds of assorted ammunition.

The other 646 rounds of assorted ammunition had been in the speaker-box.

At the home, Jawaddi Woodside told police that the ammunition was his, which he had brought from Florida. He confirmed the same when interviewed in police custody at the Central Detective Unit and said that the crimes were motivated by the reward of quick money.

“Do you agree with the summary of the prosecution’s case?” the chief magistrate asked the 24-year-old.

His lawyer, Ian Cargill, made a plea in mitigation on his behalf, stressing that his client “took responsibility for his actions”.

“He’s prepared to do his time because he said the ammunition are his and he’s very remorseful,” the lawyer added.

“Young man, the climate in the Bahamas is an unhappy one and the implications are far reaching, nationally and internationally,” the chief magistrate told the 24-year-old.

She added that the amount of ammunition seized, if released onto the streets of the capital, would cost lives.

“Young Bahamians are indiscriminatingly being murdered and this must stop,” the magistrate said.

The chief magistrate commended him for being forthright in his guilt but noted: “I see no other alternative than to give you a sentence that will serve as a deterrent.”

The chief magistrate noted that he could face up to seven years imprisonment but due his early plea of guilt, he received six years at the Department of Correctional Services.

When the police prosecutor was asked for a trial date concerning the remaining defendants, Sgt Saunders’ initial position changed and said the prosecution offered no further evidence against them, resulting in them being discharged.