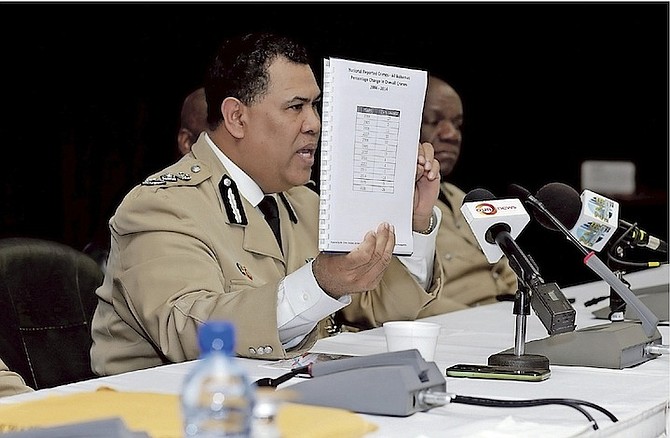 POLICE Commissioner Ellison Greenslade fired 13 people from the Royal Bahamas Police Force in 2016 for misconduct and betrayal of the public trust.

His comments came as the crime statistics the Royal Bahamas Police Force (RBPF) released Wednesday also revealed that 167 complaints were made against police officers by members of the public in 2016, an 11 per cent decrease from 2015.

“Again this year I had to send home what I call a significant number of rogue police officers, and I make no apologies for that,” Commissioner Greenslade said. “Thirteen officers who were frauds in my view wore our uniform under false pretence with criminal ideas, behaved in an unethical fashion, ceased to become efficient police officers and betrayed my trust and the public’s trust. I sent them home and I took your uniform, Bahamian public, away from them and asked them not to enter headquarters again or any other precinct that’s owned by the RBPF. I asked them to depart from us, we know them not.”

He added: “There are many cases before our tribunals. Those tribunals sit on a daily basis, headed by chief superintendents. After the assistant commissioner has done his due diligence on matters and we are satisfied there is sufficient evidence to proceed, just like in criminal matters, those matters are sent to a tribunal and these officers would be the first to tell you, notwithstanding my very pleasant disposition I’m always nudging at the deputy commissioner and asking what happened to the matter that I saw that was going viral of some fight, what happened to the matter where an officer lost my duty gear, just reminding him that I have not forgotten because I have to hold in trust for you as a public the fact that we are going to (be) above board and we are going to deliver every day in a professional and ethical manner.”

Commissioner Greenslade did not reveal precise reasons for firing the 13 officers.

Public complaints against police officers last year included 101 complaints of assault, up from 86 in 2015. They also included 15 complaints of unethical behaviour, 12 of missing property, five of extortion, seven of unlawful arrest, four of threats of harm and five of causing harm.

One hundred and one of the complaints resulted in complete investigations in some form, the statistics show.

In only one case was an officer fired as consequence of a complaint.

This is high for such a small force and jurisdiction and sadly the number should be higher. What is even sadder is that some of these members that have been released will become official felons.

They will become security guards fleecing (as opposed to policing) the fearful residents of neighbourhoods foolish enough to pay for the private security services these disgraced officers will now seek to provide the public! In many cases though, these former law enforcement officers will actually bring much more crime to the residents of neighbourhoods who sadly think they are buying greater security.

The sad part of this story is that these are probably the good cops that couldn't be bought by the PLP mafia.