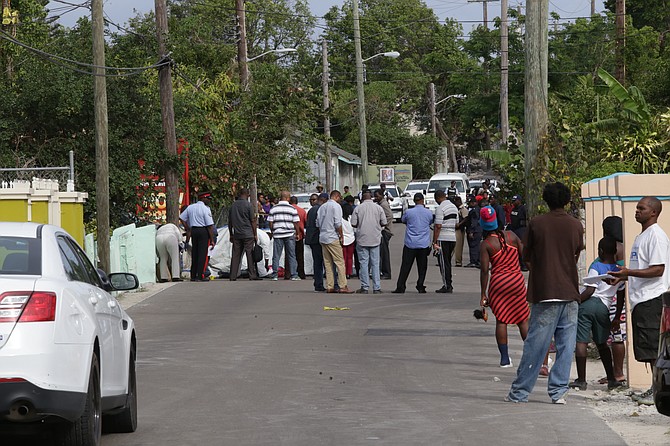 The scene at Kemp Road on Saturday morning, where a man was shot dead. Photo: Terrel W Carey/Tribune Staff

A MAN has been killed in a drive-by shooting on Kemp Road near Strachan Corner on Saturday morning as the murderous start to the new year continued.

Assistant Commissioner of Police Stephen Dean said that shortly after 9am the man was in the Kemp Road area when the occupants of a Honda Fit vehicle pulled up and fired several shots at him, killing him. He was pronounced dead on the scene.

ACP Dean said they did not have any details or motive for the killing but appealed to the public for information.

"As we always do we are asking for members of the public who might have been in this area, or might have been canvassing in the area who might have some sort of information, immaterial to how insignificant it might seem we ask you to contact the police immediately," ACP Dean said.

He vowed the police would "spare no efforts in 2017 to make sure they are arrested and that they are behind bars and that justice is brought to them. We cannot allow these criminal elements to continue to run around through New Providence or anywhere in the Bahamas feel there is no justice, that there's no law and order. They must be brought under subjection and we will do so."

It is the eighth homicide of the new year according to The Tribune's records.

It is the second incident in the area in a couple of days. On Wednesday night, 24-year-old Kevin Rolle aka 'KJ', was discovered dead near the intersection of Kingston and Denver streets, off southern Kemp Road, with multiple gunshot wounds.

He was known to police and, according to local residents, was reportedly released on bail in recent months. He was rumoured to be connected to the shooting death of a young man in the southern Kemp Road area in 2015.

How long has ACP Dean been a scorch record. After every murder and after every serious crime. Yet things remain the same.

The safest place you can be in the Bahamas is a fast food restaurant, guaranteed at least ten cops will be there at one time.

Actually, the safest place is downtown, Nassau. It has the largest concentration of police officers loafing around doing nothing instead of being over-da-hill where the crime is really happening.

The RBPF doesn't want their team to lose the drug gang war, it will never end if there is money to be made; do you get it now?

The system has failed the whole entire Bahamas, instead of creating a system to destabilize crime a system was made to influence crime, denying bail to those accused of a crime has cause many many young men to fall victims to crime being wrongfully imprisoned and ending up on the wrong side of the law. Can the Government who feel that they had done such an awesome job with crime turn and face the over 500 plus murdered victims family and say crime is down and the Bahamas is safe can the Government or any official turn and face the thousands of babamains who were targets of crime can anyone look the nation in their eyes and say this is a safe country. Only he who feels the pain knows the pain and the only sitting member in Parliament who could elaborate to the feeling of having a loved one taking away is the honourable Leslie Miller, law enforcement officers only can do as far as the laws allow them to, our government sits in the house and take the nation cry for a complete joke and laughing matter so we can't expect any changes or a serious no tolerance towards crime so now it's up to the people to fight for our lives and do what it takes to make the Bahamas a nation of peace and love again.

Correction Chicago's rate is 2.2 a day

I don't know why our government doesn't clean up Chicago. It may be a sanctuary city like San Francisco. Gangs have taken over the city. They have gun control so only the criminals have guns. Which is a lot of the problem. Look at NY City it's the same way, and NY has gun control. I have a friend every time he goes to NY he gets mugged. Look at Atlanta we don't have gun control, and there is crime. It's in certain parts of town, and usually drug, gangs or domestically related. It usually isn't random.

Comrades! We all grown up reading Da Nyew Testament from an early age knowing that God's native tongue was and will always be Bahamalander - then why doesn't He talk some sense into our people.... Cause it ain't like we can't understand what He needs remind us all of and about how peaceful The Bahamaland was once before like.

LOL, Tal, you should be a comedian, your F-ing funny! I can just picture God talking to Moses in Bahamian...LOL! "Yo Mon, I only let you see the promise land but did not let you enter because Mon, you listened to the Pot cakes and not me"....LOL!