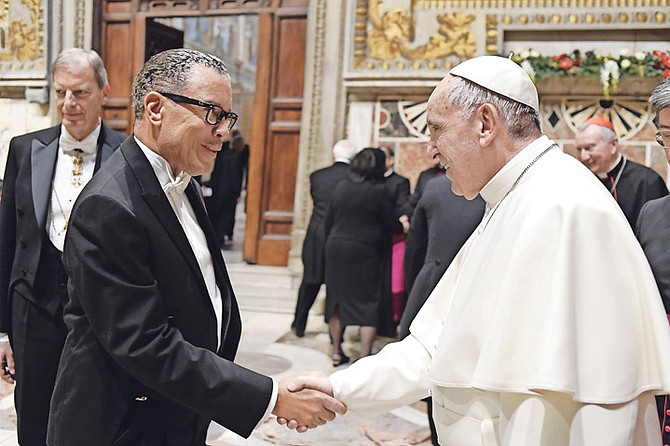 Sean McWeeney meets Pope Francis in the Apostolic Palace of the Vatican.

THE Bahamas non-resident Ambassador to the Holy See, Sean McWeeney QC, attended the annual gathering of the diplomatic corps accredited to the Holy See in the Apostolic Palace of the Vatican last week.

The high point was the annual “state-of-the world” address delivered on Monday to the ambassadors by Pope Francis, followed by the traditional exchange of greetings between each of the Ambassadors and the Pope. It was Mr McWeeney’s third time meeting Pope Francis.

In his address, Pope Francis delivered a sobering and wide-ranging survey of the major issues facing the world today. He expressed particular sorrow over the “homicidal madness” of recent “fundamentalist inspired terrorism” and urged leaders of all religious faiths to reaffirm without equivocation that “one can never kill in God’s name”.

The Pope, as supreme leader of the world’s 1.2 billion Roman Catholics, also called on governments everywhere to combat poverty. “Fundamentalist terrorism,” he said, “is the fruit of a profound spiritual poverty, and often is linked to significant social poverty.” This requires, he said, “suitable social policies aimed at combating poverty.”

The Pope also renewed his earlier calls for greater compassion and empathy for the plight of migrants, displaced persons and refugees seeking better lives in wealthier countries. At the same time, however, he acknowledged that the integration of such persons had to be achieved in a way that would not cause host societies to lose their sense of security, identity and socio-political stability. Moreover, he cautioned migrants to remember their “duty to respect the laws, culture and traditions” of their new homes.

The questions are relevant when it is clear that VAT needs to be increased to 15% after the election to cover the constant budget deficit.

Comrades! Let's hope we Vatican Ambassador deposited title bit we moneys in the collection plate to help ride the Pope over with his groceries bill - cause money is getting tight for the Holy Father.
Contrary to the belief of many worldwide that the Vatican's pockets are deep in extraordinary wealth, it's actually broke as a church mouse - Yet, to my understanding, Rome receives no direct financial remissions from the Catholic Archdioceses The Bahamaland.
If it were not for the Pope's own Peter's Pence Purse put aside before his reign as Pope, the Pope couldn't pay keep the lights on in his little apartment.

The Pope shaking the hand of one of Lucifer's more contemptible representatives! No need for us to worry though because St. Peter has all of "the goods" on Sean and will be vigorously guarding the Pearly Gates when this despicable representative of Lucifer seeks to gain entry.

Let's hope too that the Pope had enough sense to vigorously wash his right hand with much Holy Water and Anti-Lucifer Soap shortly after shaking Sean's hand!